Benson: '30-minute guarantee' for SOS services may not occur until 2022

Benson: Nearly a third of Michigan’s self-service secretary of state kiosks are broken and customers are waiting “far too long” for basic services.

Benson: '30-minute guarantee' for SOS services may not occur until 2022 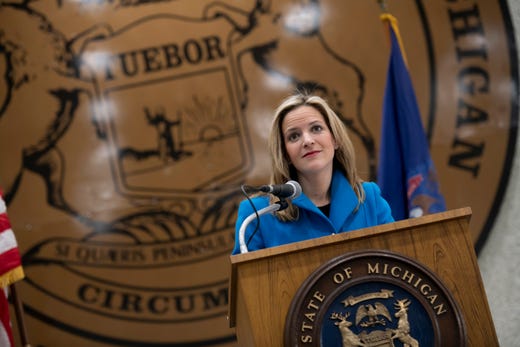 Secretary of State Jocelyn Benson holds a press conference at Cadillac Place, in Detroit, April 11, 2019, to announce plans to improve wait times and services at SOS branches across the state. David Guralnick, The Detroit News
Fullscreen 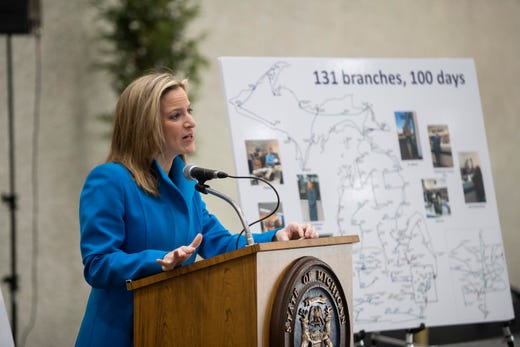 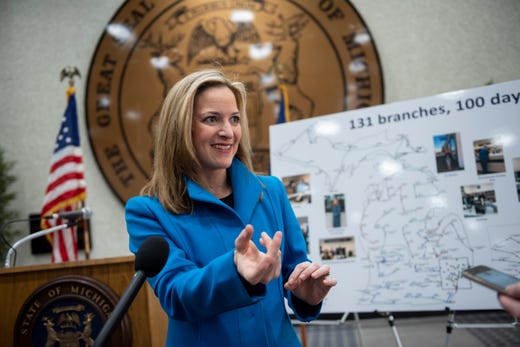 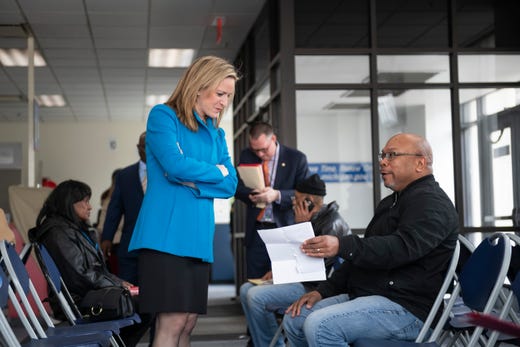 Secretary of State Jocelyn Benson chats with Frank McGhee, of Detroit, at the SOS branch office at Cadillac Place, in Detroit, April 11, 2019. Benson announced plans to improve wait times and services at SOS branches across the state. David Guralnick, The Detroit News
Fullscreen 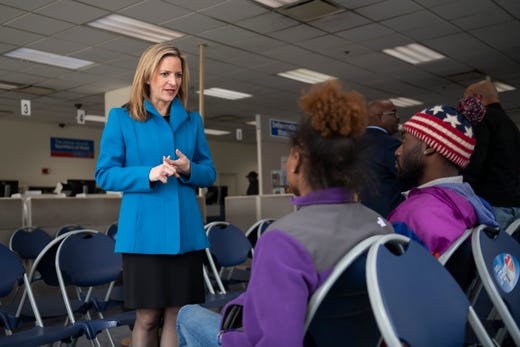 Secretary of State Jocelyn Benson chats with Jaymie Jones, left, and Travon Johnson, of Detroit, as they wait at the SOS branch office at Cadillac Place, in Detroit. David Guralnick, The Detroit News
Fullscreen 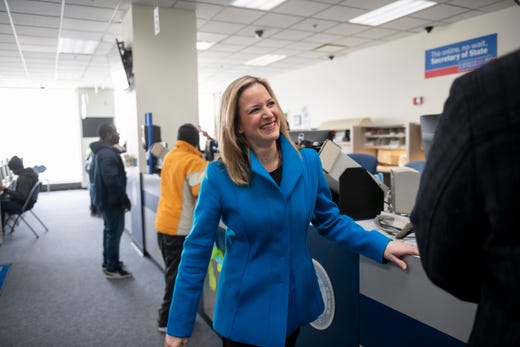 Secretary of State Jocelyn Benson chats with customers as they conduct business at the SOS branch office at Cadillac Place, in Detroit. David Guralnick, The Detroit News
Fullscreen 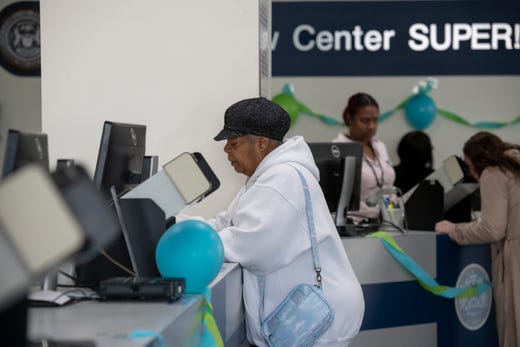 Delores Baldridge, of Detroit, pays for the title on her car at the Secretary of State branch office at Cadillac Place, in Detroit. David Guralnick, The Detroit News
Fullscreen

Detroit — Secretary of State Jocelyn Benson said Thursday she would work to reach the 30-minute guarantee she made while campaigning last year, but she warned that deep-seated problems could mean the goal isn't realized until 2022.

Benson made the comments at a Thursday press conference after visiting all of Michigan's 131 branches in her first 100 days in office. During the weeks-long tour, she said she found nearly one-third of the state’s self-service secretary of state kiosks are broken and customers are waiting in line “far too long” for basic services.

“If it was possible to have a 30-minutes guarantee in place tomorrow, I’d do it,” Benson said. "But we inherited a broken system, one that is a result of deep challenges and decisions that were made far before I got there that brought us where we are today.”

Benson asked for patience as the office reviews and updates the department's operations, noting that the issues “are the result of short-term solutions over the years that have yielded only partial results.”

“It is not acceptable and it needs to change,” Benson said.

"In 2022, Michigan Voters will remember when Jocelyn Benson failed to keep her promises," Cox said in the tweet.

At the branch connected to the Secretary of State's Cadillac Place office in Detroit, Frank McGhee of Detroit had no complaints about his relatively short wait. But McGhee said that’s not always the case in other branches.

“It’s been much slower in other places because of low staffing,” he said.

The inconsistencies among the state’s 131 branches are cause for concern, Benson said, noting that staffing at various branches does not meet the need for those specific locations.

The 41-year-old Detroit Democrat personally visited the state’s 131 branch offices, sometimes incognito. While she noted the hard work of employees, she also reported several flaws in the current system, among them that one-third of the state’s self-service kiosks were broken and “in general they were too difficult to use.”

“Our current system is inconsistent, outdated and inefficient,” Benson said. “Fixing it will require a top-to-bottom review.”

At downtown branches in Flint, Detroit and Grand Rapids — arguably among the busiest in the state — customers had few parking options, she said. At a Dearborn branch, Benson said she was approached by customers looking for a translator because there were no staff members who spoke Arabic in a city with one of the largest concentration of Muslims in the country.

In the Upper Peninsula, customers traveled long distances and, at times, in severe weather to do business that they potentially could do online.

Benson outlined a plan Thursday to modernize communication with customers and upgrade offices. She noted that her team would be working toward the goal of a 30-minute guarantee “incrementally and consistently through my entire term.”

Benson said she’s still unsure how much the long-term fixes will cost but hopes to save money by updating online services and eliminating some of the $7 million in mailings the office sends out each year. But she acknowledged that customers who prefer to do business in person at the branches also need efficient services, dual audiences that Johnson also tried to satisfy during her eight years in office.

Her office plans to update the Secretary of State website to increase efficient access to online services, decrease the number of times high-volume customers such as auto dealers and manufacturers have to visit branches, and work with the Legislature to develop options such as multi-year license plates and automatic license renewal.

Benson also plans to improve staff support, make offices more welcoming, create an express line for quick transactions, and expand features that have been proven to work, such as appointment options.

Early this year, the MI-TIME line management system was taken offline because of a long-term issue with the program providing inaccurate wait times, “creating deep frustration for our customers and employees," the secretary of state said.

The system’s algorithm predicted wait times based on an average time spent at the counter without accounting for some who would be at the counter longer than others, Benson said. That issue combined with the launch of a new computer system in February meant that some people waited significantly longer than what the computer was predicting.

Her office took the program offline, revamped the program simply to show how many people were in line and redeployed it to some branches. 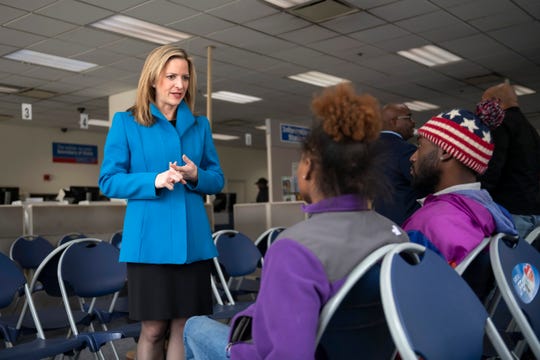 Secretary of State Jocelyn Benson chats with Jaymie Jones, left, and Travon Johnson, of Detroit, as they wait at the SOS branch office at Cadillac Place in Detroit, Thursday. After visiting all of Michigan's 131 branches in her first 100 days in office, Benson said she found nearly one-third of the self-service secretary of state kiosks are broken and customers are waiting in line “far too long” for basic services. (Photo: David Guralnick, The Detroit News)

The wait at many other offices, Benson said, was “essentially because you’ve got an office that is set up to process 20 transactions an hour, let's say, and 30 people who come in the door every hour.”

The proposed changes come none too soon for customers like 21-year-old Desiree Quinn, who got in and out of the downtown Lansing office quickly April 4. But she said she had to schedule her appointment three weeks out in order to do so.

“This was the earliest I could get,” Quinn said.

Chris Anderson was foiled by long wait times at his Mason branch three days in a row before deciding to drive to the Lansing branch.

“In the past it wasn’t that bad, but the last three months that hasn’t been the case,” he said.

The experience was different for Reba Torongo who waited two and a half hours at the Lansing office in November, but was in and out in 45 minutes on April 4.

“That gal promised 30 minutes and she almost met it,” Torongo said.