Student: MSU response to rape report left me in 'despair'

Bailey Kowalski publicly accuses the university of discouraging her from reporting a sexual assault four years ago by three basketball players.

Student: MSU response to rape report left me in 'despair' 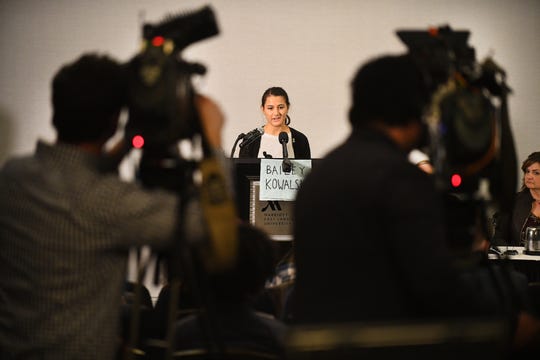 East Lansing — No longer a “Jane Doe,” 22-year-old Bailey Kowalski on Thursday publicly accused Michigan State University of discouraging her to report a rape four years ago by three players on the school’s basketball team.

In doing so, the MSU senior said she was speaking out to encourage other sexual assault victims to come forward and spur change, an action made easier for her as she approaches graduation and prepares to leave the university.

“I chose to come to Michigan State University. I did not choose to be gang raped. I did not choose the consequences I and my family have been forced to bear. Those decisions were made for me when I was 18,” Kowalski said in an emotional press conference in East Lansing, where she was joined by her parents, brother, counselor and attorney.

Kowalski, who sued the university anonymously last year before first going public this week in an interview with the New York Times, declined to name the student athletes who allegedly raped her and told reporters her story is about more than the basketball team.

But her lawyer said they have “not ruled out” the possibility of requesting criminal charges separate from her civil lawsuit, which seeks compensation from the university for the impacts of psychological and emotional distress.

"She’s tired of hiding and living in the shadows, said attorney Karen Truszkowski.

The suit alleges that Bailey was raped in April 2015 by three MSU basketball players in an off-campus apartment after meeting at Harper’s Bar in East Lansing. As a sports journalism student, she accepted an initial offer to mingle with the players over a drink but later suspected she had been drugged.

In her attempt to report the rape to the university, she was told by MSU Counseling Center staff that cases with "guys with big names" are common and the best thing to do was to "just get yourself better,” according to her legal complaint.

Kowalski alleges she was told by MSUCC staff that "if you pursue this, you are going to be swimming with some really big fish."

“I’ll never forget that phrase and the immediate feelings of despair and isolation,” she said Thursday.

Truszkowski, her attorney, said they have ideas of which staff members Kowalski talked to four years ago but are not certain and are still working to confirm their identities.

As for their comments, “there’s a world of big fish at any university,” Truszkowski said. “Coaches, athletic department (officials), president, administration, board of trustees. We don’t know what they meant by, ‘You’re swimming with some big fish.' They just wanted her to know, you probably don’t want to do this.”

MSU cannot comment on the specifics of an ongoing lawsuit, spokeswoman Emily Guerrant said Thursday, but "we applaud the courage of all survivors who come forward to tell their story as we continue to listen and learn from them."

Guerrant said that since 2015, MSU has worked to improve sexual assault prevention and response efforts and make it easier for "survivors who have to navigate complex systems and try to make informed decisions under difficult circumstances," which she acknowledged has been a challenge in the past.

“We are committed to listening to survivors who bravely tell us about their experiences so that we can improve our response and help those who seek support in the future," she said.

The university took a different tone in April 2018, when Kowalski initially filed her lawsuit, calling the claims "simply untrue" in a lengthy statement that included information about her counseling visits and appointments.

At the time, MSU said the woman “never revealed the names of her alleged assailants nor, until she filed her lawsuit, did she publicly assert that an assault had occurred.”

Kowalski said Thursday she was “re-victimized” by that MSU rebuttal statement last year, calling it a “scare tactic" to discourage her legal action.

She had sued the school anonymously in the wake of the separate Larry Nassar sexual assault scandal, which forced former President Lou Anna Simon to resign and prompted hundreds of Nassar victims to speak out against the former sports doctor in court.

With several Nassar survivors looking on at her press conference, Kowalski praised them and said “they influenced my decision to come up here and be a voice for those who have been silenced.”

Attending the school after suing it as “Jane Doe” has been like living a “double life,” Kowalski said, telling reporters she made up a story to tell other people about why she changed her major from sports journalism to integrated biology.

“I’ve had to learn how to essentially go from a bleed green Spartan fan to, ‘Why don’t you care about the fact that we’re making it to the Final Four this year?’”

Kowalski had interned for the Big Ten Network her freshman year and had done some sideline reporting while working at women’s basketball, volleyball and men’s baseball games, her parents said. But she gave it up after the alleged rape, which she said left her a “shell” of herself, depressed and anxious.

“People ask us questions, you know, why she had to change her major,” David Kowalski told reporters after his daughter’s press conference. “She was so gung ho on broadcast journalism. That was all taken away from her.”

Kowalski’s suit claims MSU violated her rights under the federal Title IX anti-discrimination law by failing to promptly or appropriately respond to her claims of sexual assault.

The complaint accuses the university of engaging “in a pattern and practice of behavior designed to discourage and dissuade students who have been sexually assaulted form seeking assistance and protection.”

District Judge Paul L. Maloney in November denied MSU’s initial motion to dismiss the case but is considering a second request by the university.

MSU attorneys argue Kowalski’s claims suggesting “negligence” don't amount to intentional gender discrimination and are “fundamentally inconsistent with the strict bar for liability” in Title IX cases. And the university cannot be the "legal, proximate cause" of an assault that occurred in an off-campus apartment, they contend.

Speaking Thursday, Kowalski said she's lived with a "heavy burden" most of her college career after the alleged assault her freshman year.

"I'm coming out today because I am no longer afraid," she said. "I'm empowered, and I have nothing to be ashamed or embarrassed of. I know that there are others that exist, and they to have been afraid. I want to be an example for them."