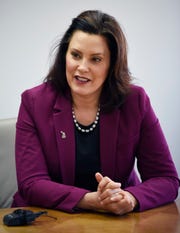 Detroit — Michigan Gov. Gretchen Whitmer signaled Monday she is open to a major deal that would pair a long-term road funding solution with reforms to the state’s no-fault auto insurance system, but at least one GOP leader quickly dismissed the possibility.

Republicans have balked at Whitmer’s $2.5 billion plan to raise fuel taxes by 45 cents per gallon to “fix the damn roads” and are developing their own separate plans to cut auto insurance rates for Michigan drivers that regularly rank among the highest in the nation.

Connecting the issues could open the door for negotiations on what outside observers have already floated as a possible “grand bargain” that may be more palatable for taxpayers — and lawmakers who will need public support for re-election.

“I am open to that,” Whitmer said Monday in an interview with The Detroit News editorial board. “My first priority is the budget, but I could envision a scenario where I signed the budget and six seconds later signed insurance relief.”

Whitmer’s fuel tax plan would cost the average Michigan driver about $23 a month, she said.

“Insurance costs are well in excess of that. If we can give people some relief on the insurance side and actually make the investment in our infrastructure, I would consider that a win-win.”

House Speaker Lee Chatfied, however, has little appetite for pairing the issues, said Gideon D’Assandro, a spokesman for the Levering Republican.

“The speaker is not interested in trading good policy for bad,” D'Assandro said. “Michigan families have waited decades for progress on no fault reform, and they deserve real rate relief. What good does it do to save Michigan families hundreds of dollars on their auto insurance if you are just going to immediately take it all back with a massive, back-breaking 45-cent tax hike at the pump?”

Gov. Gretchen Whitmer talks about why a gas tax is the best way to fix Michigan's problem with road maintenance. The Detroit News

That said, Shirkey “is not focused on crafting a ‘deal,’ but rather on finding solutions to both problems,” she said.

Senate and House Republicans are each developing alternative road funding proposals in response to Whitmer’s plan, and Shirkey said last week the upper chamber’s would be “dramatically different than a 45-cent gas tax increase” proposed by Whitmer, which would give Michigan the highest fuel taxes in the nation.

Both chambers have also been holding hearings on potential auto insurance reforms, and the Senate is expected to introduce a plan in coming weeks.

Despite GOP opposition to her gas tax plan, Whitmer has continued to promote it at public events around the state and challenged Republicans to create a “real" alternative if they don't like hers.

Her plan, linked to her fiscal year 2020 budget proposal, would generate $2.5 billion a year in in new revenue, including $1.9 billion for roads. Other revenue would help free up General Fund money for universities and allow the state to increase K-12 classroom spending.

Whitmer campaigned on a pledge to fix crumbling roads but also promised to try to reduce auto insurance costs by increasing the transparency of the Catastrophic Claims Association, which sets an annual motorist fee that is set to rise to $220 on July 1, and by prohibiting so-called redlining by auto insurers.

But the first-term governor has not publicly weighed in on more controversial calls to end the state’s unique requirement of lifetime medical benefits for injured motorists or mandate a fee schedule for medical providers, concepts majority Republican lawmakers are again debating this term.

Whitmer said Monday she wants to ensure that people with “catastrophic injuries will have some protection."

But she declined to take a position on Detroit Mayor Mike Duggan’s push to give motorists a “choice” on the level of personal injury protection coverage they purchase. The state currently requires unlimited medical coverage for catastrophic injuries, which critics have blamed for the high cost of insurance.

“At this point, I would say that I am interested in hearing what it's going to mean long term for our state,” she said.

Whitmer also suggested she wants long-term rate reduction guarantees to be part of any no-fault reform plan, saying past proposals contained “fatal flaws” because they would have provided only temporary relief.

“It’s not easy, but I believe we can find some common ground here,” she said.

While they haven’t endorsed her specific plan for a 45-cent fuel tax increase, up from the current 26.3 cents per gallon, several leading business groups are urging lawmakers to support some form of a user tax increase to fund additional road repairs.

“We see a logic in terms of doing car insurance first and then the roads,” Michigan Chamber of Commerce President and CEO Rich Studley said last week.

Regardless of whether officials end up pairing the issues, Whitmer said her top priority remains passing a state budget with new road funding dollars and called on lawmakers to approve a 2020 spending plan before leaving for their traditional summer break.

“I think the most important thing that we have to do is set the state budget,” she said.

“And going on break doesn’t mean people come back with better ideas. That means that they’ve just given themselves vacation before getting their work done.”