The exhibition showcases the pain endured by hundreds of Nassar victims and the triumph as they spoke out and demanded justice. 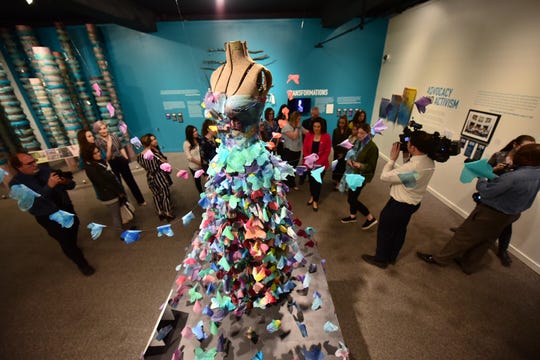 Visitors walk past a sculpture called “Ten Feet Tall” created by sister survivor Alexandra Bourque during a tour of “Finding Our Voice: Sister Survivors Speak” at the Michigan State University Museum, April 16, 2019. The sculpture was made of 300 tie-dyed silk butterflies. (Photo: David Guralnick, The Detroit News)

Woven within Fishman's painting are other themes of the sexual abuse scandal involving pedophile Larry Nassar: gymnasts who are standing on each other's shoulders and pulling apart the symbol of USA Gymnastic, a gavel to represent Ingham County Judge Rosemarie Aquilina and an arrow that points to the unknown, symbolizing the work around sexual assault that still needs to be done.

505 painted tiles, honoring the number of known survivors of Larry Nassar, hang on a wall at the art exhibit. David Guralnick, The Detroit News
Fullscreen

Visitors walk past a sculpture called “Ten Feet Tall” created by sister survivor Alexandra Bourque during a tour of “Finding Our Voice: Sister Survivors Speak” at the Michigan State University Museum, April 16, 2019. The sculpture was made of 300 tie-dyed silk butterflies. David Guralnick, The Detroit News
Fullscreen 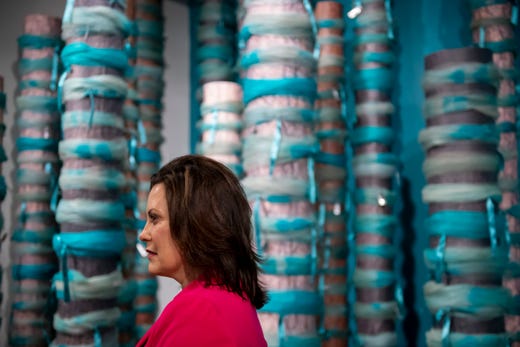 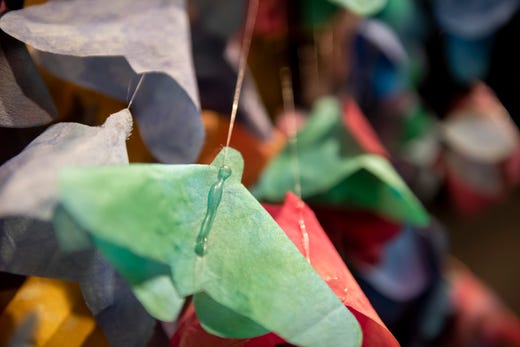 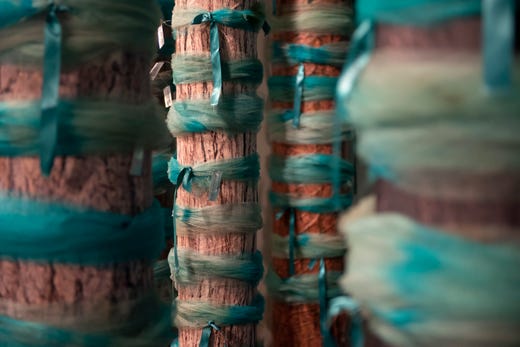 An installation of re-created trees adorned stands at the art exhibit “Finding Our Voice: Sister Survivors Speak”. The ribbons were originally tied to trees around campus in support of survivors of Larry Nassar. David Guralnick, The Detroit News
Fullscreen 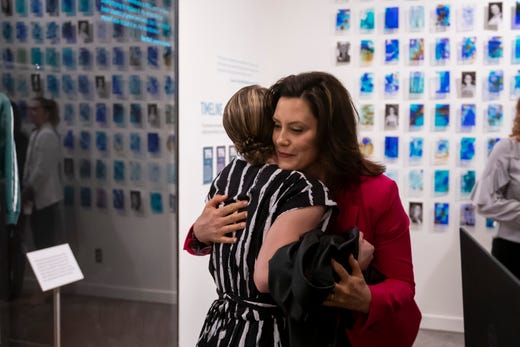 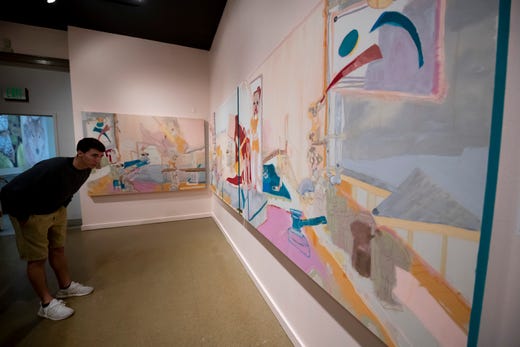 Fishman, an art student at the University of Michigan, created the painting, Together We Roar Pt. 2, for her senior thesis project. But it is now a key piece of art featured in MSU Museum’s “Finding Our Voice: Sister Survivors Speak” exhibit, which opened Tuesday with a gathering of officials, students, faculty and many women who were abused by Nassar.

"The painting is a narrative about the internal struggle and the steps toward healing," said Fishman. "It is a story that acknowledges our pain, but also I want sisters to look at it and remember our power, our perseverance, how far we’ve come and how much change we’ve made. It's also to make sure that the conversation is continued because there is still a lot of work to be done. There are still a lot of enablers who have not been held accountable."

The exhibition, which is on display through March 2020, showcases the pain endured by hundreds of victims over more than 20 years and the triumph that followed as they spoke out and demanded justice beginning in 2016.

It also insists that their journey, and that of other sexual assault victims, is not over.

"The most powerful thing I've ever seen is someone who turns grief or a hard experience into a cause, to help others, to make the world a better place for others," said Gov. Gretchen Whitmer, who helped cut the teal ribbon to officially open the event. "That's why this is so powerful." 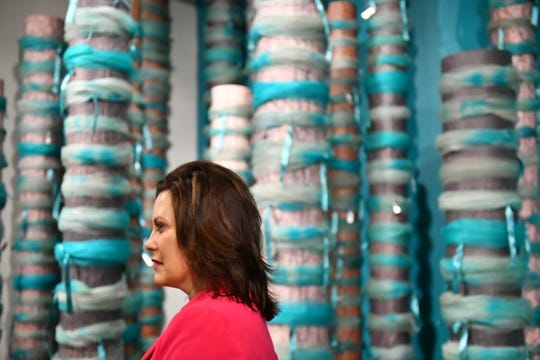 The exhibit begins by highlighting the 505 known victims, through tiles that were created by the young women and their allies and painted in mostly blue with abstract designs. They are displayed on a wall and include the photos of some of the women at the ages when their abuse began.

Along the way, the exhibit includes a timeline of the scandal, showcasing the trauma the victims endured and institutional failures of MSU, USAG, U.S. Olympic Committee and Gedderts' Twistars USA.

During Whitmer's private tour of the exhibition before the program, Amanda Thomashow told the governor that she thought it was important that institutional culpability was part of the story.

"It's really great there is a section on things that happened here, things that were ignored," said Thomashow, who reported Nassar's abuse to MSU in 2014.

MSU Trustee Brian Mosallam, who spoke earlier in the day as a tree was planted, agreed, saying MSU must remember its past mistakes so it doesn't repeat them in the future.

"This is part of our past, and it's something that is very important that we never forget as an institution," he said.

The exhibit also highlights the transformation of the young women after they spoke out and the advocacy work many have since engaged in to change the culture at MSU and other places.

"Advocacy is a huge part of a healing for a lot of the people here and using our voices to take back that power that we felt that was lost through the abuse," said Grace French, who started a nonprofit, The Amy of Survivors.

Larissa Boyce, who said she was the first to tell someone at MSU about Nassar in 1997, added that speaking out and trying to help others gives her a purpose.

"I wanted this horrible thing to have something good come out of it, so that is why I started sharing my story and advocating for others," said Boyce. "Otherwise, there would be nothing positive I could take from what happened."

The exhibition was conceived after Valerie von Frank, the mother of French, tied more than 200 teal ribbons around trees on MSU's campus, in honor of more than 200 young women who testified of Nassar's abuse in two courtrooms over nine days.

When the ribbons were infested with gypsy moths and needed to be taken down, MSU Museum Director Mark Auslander reached out to von Frank to preserve the ribbons for an exhibition, which was co-curated in conjunction with several survivors.

That's why a central part of the exhibit includes a replica of a grove of trees with teal ribbons wrapped around it.

Another heart of the exhibit is an art installation of a colorful dress made of silk butterflies, created by Hamtramck resident Alexandra Bourque.

"The MSU Museum has become a center for healing conversations around sexual assault," said MSU Board Chair Dianne Byrum. "We are so deeply grateful for the survivors' engagement in the exhibit and the extension of trust it required to help create an exhibit that is honest ... This exhibit ultimately is life-affirming testimonial to these young women's courage and resilience."

Acting MSU President Satish Udpa was unable to attend the opening but recorded a video statement, saying the exhibit brings a powerful message

"It asks us to reflect on institutional accountability, to honor the voices and stories of all sexual assault survivors and to work toward a world free of sexual violence," said Udpa. "We are grateful to our sister survivors, their family members and allies and to the museum staff who worked together to create this exhibition.

"This collaborative process models for us the spirit of compassion and partnership that we so deeply need as together we take the next steps forward in our healing journey."