Michigan Attorney General Dana Nessel announced Thursday her office will double-down on efforts to reduce puppy scams in the state. 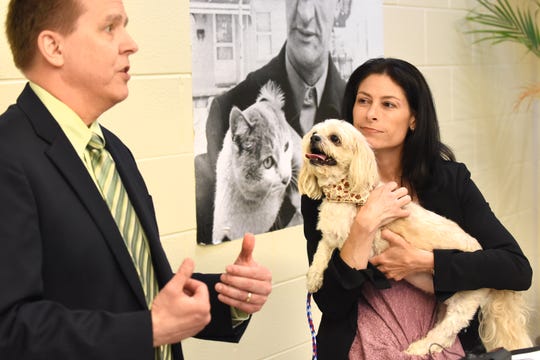 Detroit — Michigan Attorney General Dana Nessel announced Thursday her office will double-down on efforts to reduce puppy scams in the state after receiving more than a dozen complaints, she said.

Each year, Americans spend $1 billion buying puppies without realizing they may be doing business with puppy con artists, puppy mill operators or both, Nessel said.

"We are here today to try to bring that practice to an end," Nessel said Thursday during a news conference at the Michigan Humane Society in Detroit.

"While every pet deserves a loving home, my office will make it a priority to protect Michigan residents from unscrupulous puppy con artists who break our state's consumer protection laws and line their pockets at the expense of animal welfare."

Puppy scams occur online, through email and in storefronts, she said. Customers are buying and wiring money for an animal that is not as described in the listing, are not as healthy as it appears or may not exist at all.

AG @dananessel says her office is on a mission to reduce puppy scams in Mich. “My office will make it a priority to protect Michigan residents from unscrupulous puppy con artists who break our states consumer protection laws & line their pockets at the expense of animal welfare.” pic.twitter.com/gfdihiGCmf

Since 2017, the Office of Consumer Protection has received nearly 20 of complaints of alleged puppy scams, Nessel said.

"The saddest stories to me are the people who purchase these puppies and think that they’re getting a healthy animal and it ends up being incredibly sick," she said. "It’s not just the cost of veterinary bills but the heartbreak of purchasing an animal that’s not very long for this world."

In July 2017, nearly 30 customers filed complaints in Macomb Circuit Court against Little Dogz, formerly known as Pollywood Pets, at 1128 Gratiot in Mount Clemens. The shop’s owner closed the shop because she could not afford to pay damages or lawyer expenses, according to attorneys in the case.

The store sold animals at Gibraltar Trade Center on weekends before the trade center stopped selling animals in 2015 and began a collaboration with Macomb County Animal Control and Shelter to adopt animals.

Some customers received refunds for their cost in treating their sick pets, but most received a tax break when attorney Jenifer Measel, who worked on behalf of pet owners, donated items from the closed pet shop to nearby animal shelters.

The majority of those who fall victim to puppy scams are meeting breeders in off-site locations or online, said Mitzi Mertens, complaint specialist for the Consumers Protection Office.

"The complaints we've received this year involved a couple regarding the health of the puppies and a few who paid money through wire transfers and never received a puppy," she said. "They think they're purchasing from a legitimate site, but it's not."

Nessel and her team visited the humane society in Detroit to learn about issues pet owners confront them with and how they can be dealt with in courts.

" ... They’re sometimes small operations and sometimes larger," Potchen said. "So we’re here today to learn more about the operations from the humane society ... and we’re looking for opportunities to address these unfortunate situations."

Nessel said breeders often meet buyers off-site so they can "cover-up the way they treat their animals."

"Puppy mills are inhumane dog breeding operations that keep dogs in overcrowded and unhealthy conditions, and are not regulated or licensed by the Michigan Department of Agriculture and Rural Development," she said. "People are selling puppies online that's different than what's described or collect money for an animal that doesn't exist."

If anyone has fallen for a puppy scam, they are encouraged to file a complaint with Michigan's Consumer Protection Division online at www.michigan.gov/ag.