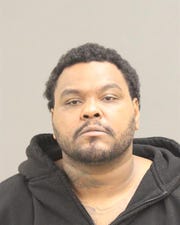 Warren – A man wanted for homicide and drug charges in Georgia was arrested Thursday night in Warren for alleged involvement in prostitution-related crimes in Metro Detroit.

Glenn Hogan, 29, of Atlanta was arrested at a Warren motel on Convention Drive, one of several where he has apparently been living in Metro Detroit since December. Authorities said he fled Georgia where he had outstanding arrest warrants for homicide, willfully killing with a gun; armed robbery, and cocaine possession, Warren Police Commissioner William Dwyer said,

“This is part of an ongoing effort against human trafficking for sexual purposes,” said Dwyer. “He brought a 27-year-old woman up with him and set her up in a motel and (was) advertising sex services on the internet.”

The woman, who was arrested at the motel, is not expected to be charged, said Dwyer. He said she is a victim in the scheme in which the pair stayed at area motels where they offered sex services. A small amount of heroin and methamphetamine were seized by police.

Investigators believe Hogan was living off the proceeds of commercial sex transactions, Dwyer said, and they are seeking charges of accepting earnings of a prostitute and prostitution pandering. Those offenses can carry up to 20 years in prison. Hogan, who remains in police custody, is expected to be arraigned on Monday, Dwyer said.

Georgia authorities plan to extradite him to face the homicide charge in their state.