A Genesee County high school gym teacher has been arrested and accused of recording video of a naked teenage girl at a tanning salon. 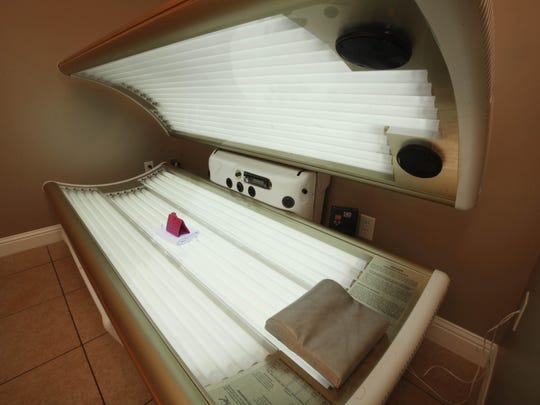 A Davison High School teacher is being accused of recording a naked teen in a tanning salon. (Photo: Rich Pedroncelli / AP)

A Michigan high school gym teacher has been arrested and accused of recording video of a naked teenage girl at a tanning salon, authorities said.

The Genesee County Sheriff's Office received a 911 call at 3:30 p.m. Monday from a mother whose 14-year-old daughter claims she was videotaped while in the Tropi Tan, 4180 W. Vienna Road in Clio.

The sheriff's office interviewed the girl, who said she was undressed and getting into the tanning bed when she noticed a smartphone with the flashlight on that appeared to be recording her.

"She looked up and saw what appeared to be an iPhone hanging over the cubicle wall and she could see that it had an orange back and the light was on," Genesee County Sheriff Robert Pickell said at a press conference Tuesday recorded by ABC12. "She suspected she was being videotaped, put her clothes on and ran out to her mother, who was nearby."

Pickell said 43-year-old Jacob Emmendorfer, who works at Davison High School, was arrested in a room next to the 14-year-old.

Authorities confiscated an iPhone from him and learned that Emmendorfer had stood on the tanning bed and recorded the girl in the other room while she was completely undressed, Pickell said.

Emmendorfer was a customer who visited the tanning salon every other day, Pickell said. Deputies confiscated his iPhone and three iPad laptops. His vehicle was searched and deputies found a clear plastic bag with a crushed-up substance.

"Right now, I have a big pit in my stomach," Brown said. "It sickens me to think that someone in Mr. Emmendorfer's position, mentor and model for children, would do anything as heinous as this."

Emmendorfer has been placed on administrative leave and is being housed in the Genesee County Jail while the sheriff's office investigates.

"When a parent sends their kid to school, even though this 14-year-old girl was not a student ... it's just a serious violation, especially for a school teacher," Pickell said. "To Davison parents, Superintendent Brown will do everything in his power to keep your children safe."