An estimated 2,060 of the lumbering beasts roam the island wilderness, according to a report by Michigan Technological University researchers 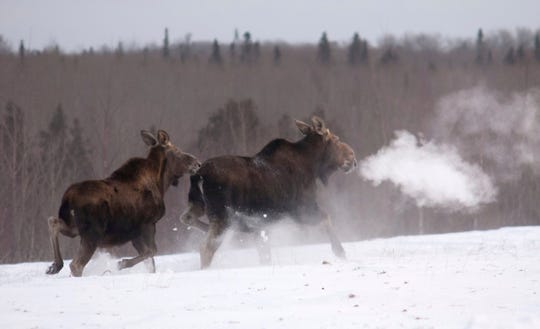 An estimated 2,060 of the lumbering beasts roam the Isle Royale wilderness, according to a report. (Photo: AP)

Traverse City – Moose are thriving at Isle Royale National Park, but the trees on which they feast are paying a heavy price, scientists reported Tuesday.

An estimated 2,060 of the lumbering beasts roam the island wilderness, according to a report by Michigan Technological University researchers who spend weeks there each winter observing the relationship between moose and the wolves that prey on them.

The moose number is believed to be the highest since 1995, when the total exceeded 2,400, only to plummet to about 500 within two years because of harsh winters, a shortage of food and a drop-off of wolves that previously had culled the herd.

Conditions are similar now, although it’s uncertain how the moose population will respond, scientists said. Its growth is likely to slow at least somewhat in the coming year, said Sarah Hoy, an assistant research professor.

“The moose have severely damaged much of the vegetation they rely on during winter on the western end of the island,” Hoy said. “And it was such a deep-snow winter, it’ll have been more difficult for them to get around and find food.”

Balsam firs provide about half of the typical moose’s diet in winter. The trees have taken a beating from a century of moose browsing, the report said.

In one 10-mile-long corridor, more than 90% of the mature balsam firs that researchers tagged for observation in 1988 were still around last year. Moose also had munched the main growing stems of 60% of newly emerging firs in the same area.

“By February 2019, browsing pressure had increased yet again, and it was virtually impossible for our winter field crew to find accessible fir stems that had not been seriously browsed,” the report said.

Also in serious decline is watershield, a floating-leafed aquatic plant on which moose feed.

Researchers this winter fitted 20 of the park’s moose with radio collars. They will help track the animals’ movements and offer clues about their food adequacy and the effects of parasitic ticks and climate change, as well as predation from a rejuvenated wolf population .

The recent moose boom occurred as Isle Royale’s gray wolves dropped to their lowest point since the predator-prey study – believed to be the world’s longest – began in the late 1950s. Only two remained for several years until the National Park Service began relocating wolves from the U.S. and Canadian mainland last fall, boosting the total to 15. Officials plan to take as many as 15 more wolves to the island in the next few years.

Even so, it may take a while for them to make a dent in moose numbers, said Michigan Tech biologist Rolf Peterson, a longtime leader of the study.

“The new wolves’ biggest impact will be if they kill lots of calves,” Peterson said. “They’re just getting started on that.”