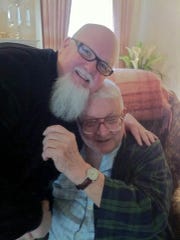 Russ Gibb, a former disc jockey and band promoter who launched a music hall in Detroit to rival east and west coast venues and kick-started a world-class Motor City music scene, died Tuesday night of heart failure at Garden City Hospital. He was 87.

Gibb's death was confirmed by former student Andy Fradkin, who was given power of attorney "quite a few years back."

"It had been a rough few years for him," Fradkin said. "Hopefully he's at peace now."

Their friendship blossomed from the 1990s, when Fradkin took a class under Gibb at Dearborn High School.

"He built himself a family there," Fradkin said. "But there were many chapters of Russ, through the years."

Gibb, a local concert promoter and schoolteacher, started the Grande Ballroom on Grand River in Detroit in 1967 and then showcased live acts for budding talents like Ted Nugent and the Amboy Dukes, MC5, Iggy Pop and the Stooges and others.

He had gone west in 1966 and saw what promoter Bill Graham was doing at the Fillmore in San Francisco and decided he wanted the same for Detroit.

He did that and more, bringing acts that ended up influencing the rock genre. The Grande also hosted Cream, Howlin' Wolf, Iron Butterfly, Jeff Beck, Pink Floyd, Traffic, B.B. King and countless others along with the local acts.

"He was a real important, iconic person in Detroit culture in the '60s and '70s," said M.L. Liebler, an English professor at Wayne State University who knew him for years. "He will probably remembered as the guy who brought Detroit into the new music scene of its day because the Grande Ballroom was really the iconic music place in the middle of the country."

Liebler was introduced to Gibb through his radio show on what was then WKNR-FM in the '60s. The deejay was known as "Uncle Russ."

"He had the best underground radio voice anybody ever heard," he said. "He had a really eclectic taste."

Gibb also left his mark in the classroom. He taught communications at Dearborn High for 30 years, extending his teaching philosophy to legions of students over the decades. During his tenure, he sought to instruct in the fundamentals and then let students take ownership of their creativity.

"I was impressed by the dedication he had for his students," Liebler said. "As a teacher he was pretty respectable."

The school's video studio was named in his honor for his work with communications students, said David Mustonen, director of communications and marketing for Dearborn Public Schools.