The proposal would allow motorists to choose medical coverage levels in insurance policies. 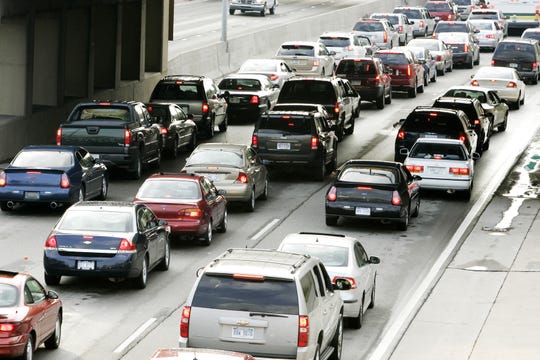 Under the proposal, motorists could still buy policies with unlimited medical coverage, but drivers with private or public health insurance plans that cover vehicle accident injuries could choose to waive any personal injury protection in their auto plan. (Photo: Ricardo Thomas, Ricardo Thomas / The Detroit New)

But Democrats blasted the proposal because it would not mandate insurers reduce rates, and Gov. Gretchen Whitmer threatened to veto the legislation if it reaches her desk in its current form.

The plan would end a long-standing requirement that Michigan auto insurance policies guarantee unlimited lifetime medical coverage for injured motorists. It would also cap reimbursement rates for hospitals and other medical providers.

The legislation would empower Michigan residents “to choose the level of coverage that fits their budget and their needs, instead of having the state dictate to them what level of coverage they are required to have,” said sponsoring Sen. Aric Nesbitt, R-Lawton.

The current system is in a "death spiral," he argued, with higher rates make it increasingly impossible for residents to afford required auto insurance, and fewer insured motorists leading to higher rates.

Republicans rejected Democratic amendments that would have required insurers to cut rates by 50 percent and prohibit them from using non-driving factors like ZIP codes to set rates, a practice critics contend contributes to sky-high rates in cities like Detroit.

The Senate plan "creates more problems than it solves," Whitmer said in a statement, signalling she does not think the proposal adequately protects consumers.

"It preserves a corrupt system where insurance companies are allowed to unfairly discriminate in setting rates, and the only cuts it guarantees are to drivers' coverage," the governor said.

Under the proposal, insurers could still offer policies with unlimited medical coverage, but they may be unlikely to do so because the state would end liability for and eventually dissolve the reinsurance program that helps pay the most expensive claims.

Instead, drivers with private or public health insurance plans that cover vehicle accident injuries could choose to waive any personal injury protection in their auto plan.

Nesbitt estimates residents with health insurance could save up to 46% by opting out of personal injury protection coverage on their auto policies. Motorists who choose auto policies with $250,000 in medical coverage could save at least 15% over unlimited plans, he said.

At the least, motorists would save an estimated $180 in annual Michigan Catastrophic Clams Association fee reductions. The fee, set to rise to $220 in July, would instead be reduced to roughly $40 when the reinsurance program is effectively closed to future claims, according to Senate Republicans.

But Republicans are "simply guessing" about the impact on motorists and "made up" the savings estimates they cited Tuesday, Senate Minority Leader Jim Ananich, D-Flint, told reporters after the vote.

"There's an old saying... 'You can take a crap in one hand and hope in another and see which one fills up first,'" he said. "If you think the insurance companies are going to give you rate reductions, we wanted to mandate it today."

The proposal passed the Senate in a 24-14 vote and now heads to the Republican-led House, where Speaker Lee Chatfield, R-Levering, is not ruling out the possibility of adding a rate reduction mandate or making other changes.

"I’m open to any conversation of any reform that will lower rates for the people of our state,” Chatfield said Tuesday afternoon after the Senate vote.

A special House committee on auto insurance rates is also considering reforms and will "combine" ideas with the Senate plan, said Rep. Jason Wentworth, R-Clare. The panel meets next week, but Wentworth is not setting any "artificial timeline" for action.

While lawmakers debated potential reforms for months, Republicans unveiled the new plan in the Senate Insurance and Banking Committee shortly before a panel vote and roughly four hours before a floor vote in the full chamber. It gave the public and interested parties little time to digest details of the 79-page policy bill.

But the panel had already heard “many, many, many hours of testimony” over intent legislation introduced earlier this year, said Sen. Lana Theis, a Brighton Republican who chairs the committee.

“The concepts have been reviewed over and over and over again," she said, referencing proposals from past sessions. The vast majority of voters she talked to on the campaign trail in 2018 wanted immediate action to cut premiums, she added.

Sen. Erika Geiss of Taylor, the ranking Democrat on the Senate committee, criticized the quick action on a proposal many lawmakers saw for the first time the previous night.

"This is so meaty, and so weighty, and impacts every single driving Michigander, that we should not have rushed it like this," she said. "It was completely irresponsible to do that, and not fair to our residents."

The proposal seeks to control medical costs by creating a fee schedule for providers, who could only charge insurers at rates mandated under worker's compensation. In-home attendant care by family members would be limited to 56 hours per week.

The plan also attempts to curb what Nesbitt called “attorney lawsuit abuse” through measures that include tougher rules prohibiting attorneys from soliciting clients within 30 days of a crash. A second bill sponsored by Theis would require lawsuits involving auto injuries to be filed in the same county as the crash, an attempt to curb "venue shopping" by attorneys.

The legislation would require the Michigan Catastrophic Claims Association to provide a driver rebate, through insurers, if its assets cover more than 120% of liabilities. The MCCA imposes an annual fee passed on to motorists to reimburse insurers for unlimited medical expenses.

The proposal would create a new auto insurance task force under the Michigan State Police that would include the Department of Insurance and Financial Services and the Attorney General's Office.

Sens. Adam Hollier and Sylvia Santana of Detroit broke ranks with other Democrats to vote for the reform plan, joining all 22 Republicans in support.

“The reality is the majority of people who I live near have already opted out because they aren’t buying auto insurance, can’t afford to buy auto insurance,” Hollier said in a floor speech, arguing the plan is not perfect but could provide relief.

Republicans approved a Hollier amendment that would prohibit insurers from refusing or limiting coverage for consumers based on where they live. But the proposal did not ban pricing based on ZIP code, and Geiss called it a "hollow" attempt to address so-called redlining.

The GOP majority rejected an amendment by Sen. Marshall Bullock, D-Detroit, that would have linked the legislation to a separate plan that would prohibit insurers from using any non-driving factors to set rates.

Sen. Ken Horn, R-Frankenmuth, voted for the reform plan and said he is concerned that high premiums are encouraging motorists to break the law by driving without coverage.

“If we do nothing, we will sentence these people to a lifetime of struggling without insurance from here to eternity,” he said.

Reducing medical coverage guarantees for injured motorists would likely increase state Medicaid costs. The non-partisan Senate Fiscal Agency projects that in a decade annual Michigan Medicaid costs would be $65.9 million higher than they are now if the legislation were signed into law.

The plan could also cost the state up to $15 million a year in reduced revenue from an existing 1.25% insurance premium tax, according to the agency.

"This is all about foisting the liability on the backs of insurance companies onto the back of the Medicaid program where people will get worse care and the taxpayers will fund it," argued Sen. Jeff Irwin, D-Ann Arbor.

A third bill advanced Tuesday morning would expand the state's racketeering law to include insurance fraud. A pattern of insurance fraud for financial gain could be prosecuted as a 20-year felony, plus a fine of up to $100,000 and legal fees.

Yearly auto insurance premiums in Michigan average $2,693, the highest rate in the nation, according to 2019 rankings compiled by The Zebra, an insurance search engine and industry research firm. Detroit is the easily the most expensive city in the country for auto insurance, with rates more than double the state average.

Auto insurance rates are "unaffordable" by federal standards in 97% of all Michigan ZIP codes, according to a recent analysis by researchers at the University of Michigan. In Detroit, average premiums cost between 12% and 36% of residents' pre-tax income in almost every ZIP code.

Lawmakers have debated auto insurance reforms for years, but past efforts have stalled amid intense fights involving the powerful insurance, hospital and trial lawyer lobbies.

Michigan Chamber of Commerce President and CEO Rich Studley praised the Senate for taking "bold action to drive down Michigan’s highest-in-the-nation car insurance rates and reform the system to make Michigan more competitive with other states.”

But Michigan Health and Hospitals Association CEO Brian Peters called it a "shocking step back" for the reform debate.

The Insurance Alliance of Michigan applauded the Senate action. While the group was reviewing the legislation, its initial evaluation suggests the plan "will give drivers a real opportunity for savings and provide commonsense reforms that will lower the cost of auto insurance for drivers across the state," said executive director Tricia Kinley.

The Coalition Protecting Auto No-Fault urged supporters to write their legislators ahead of Tuesday's vote, arguing the Senate GOP plan “would gut protections for auto accident survivors” and “amounts to a giveaway to the auto insurance industry.”