On "Meet the Press," Tlaib said Congress has been unable to exercise its oversight function because Trump is stonewalling 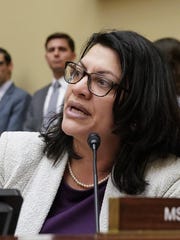 During an interview on NBC's "Meet the Press," Tlaib, D-Detroit, said Congress has been unable to exercise its oversight function because President Donald Trump has been stonewalling. (Photo: J. Scott Applewhite / AP)

During an interview on NBC's "Meet the Press," Tlaib, D-Detroit, said Congress has been unable to exercise its oversight function because President Donald Trump has been stonewalling.

"This is not about the 2020 election, it’s about doing what's right now for our country," Tlaib said.

"Democrats want to impeach ⁦‪@realDonaldTrump⁩ because they don’t have any other message heading into 2020 and they’re scared they can’t beat him at the ballot box," McDaniel tweeted.

Tlaib has long called for Trump's impeachment, saying "We're going to impeach the mother (expletive)" at a party after she was sworn in.

In March she introduced a resolution directing the House Judiciary Committee to investigate whether Trump has committed impeachable offenses.