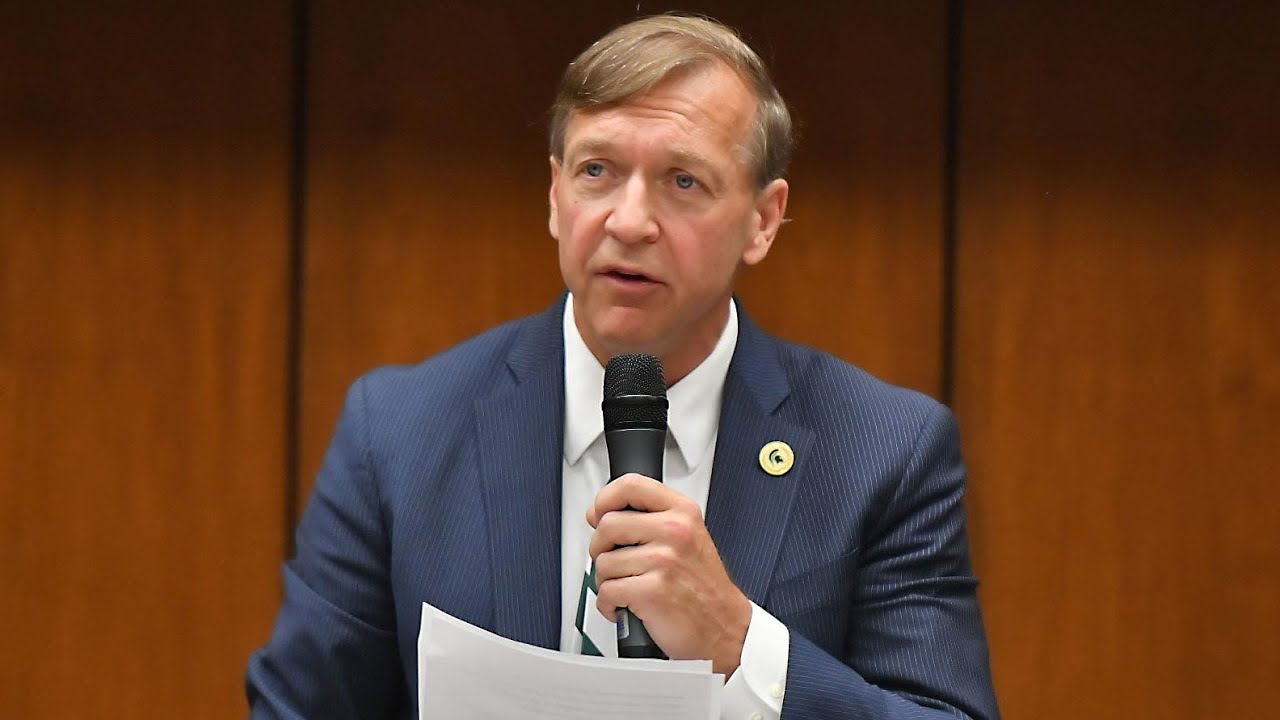 The MSU Board of Trustees approved the hiring of Stanley, a Harvard-trained doctor and biomedical researcher, to become the university's 21st president Aug. 1. His five-year contract includes  a base salary of $800,000. The vote was 8-0.

While some MSU community members were unhappy that they were unable to vet Stanley before he was hired, several of the 18 members of the search committee expressed confidence in him. Among them was Felicia Wu — the John A. Hannah Distinguished Professor of food science and human nutrition and agricultural, food and resource economics.

"Dr. Stanley perfectly fits the profile of the individual to be leading MSU now: experienced in university leadership, caring and sensitive to the needs of our healing community, actively committed to promoting diversity and inclusion, including those of different socioeconomic backgrounds, and himself having an outstanding academic background," Wu said.

Mary Finn, director and professor of the MSU School of Criminal Justice, added that Stanley has acted in ways that demonstrate transparency and integrity and he "understands academia and its values."

"He has respect for and values the important role of academic governance, having served on the faculty senate for several years while at Washington University," said Finn.

She added that Stanley has been effective at advancing diversity, equity and inclusion.

"Under his leadership, opportunities for first-generation and underrepresented minority students to access quality education expanded immensely while he was at Stony Brook," Finn said.

But Andaluna Borcila, MSU professor and member of the activist group Reclaim MSU, was skeptical.

"It’s difficult to imagine how we are going to have a culture change from a president who comes out of a closed search,” she said.

"There's going to be a lot of healing that needs to be done, and a lot of reach-out to the community in order to rebuilt trust. And that needs to happen immediately.”

Reclaim MSU, which formed in the wake of the Nassar scandal, also posted a statement.

"Dr. Stanley begins his leadership under a cloud of suspicion," the statement said. "He must immediately meet with survivors and their families and with the MSU community at large, particularly with those who have been pushing for fundamental change."

In comments after the vote, Stanley, 65, said healing the damage and division caused by the Nassar scandal would be among his highest priorities.

"What happened at MSU will not be forgotten," said Stanley, who said he wants to meet and talk with Nassar's victims. "Instead it will drive us every day to work together to build a campus culture of transparency, awareness, sensitivity, respect and prevention — a safe campus for all. This is going to be key to all of our initiatives."

He closed his remarks with thanks, especially to the Associated Students of MSU for a letter to the incoming president.

"It was full of wisdom, but I particularly took to heart their reminder that '…while you will be leading the Spartan community, you will not be independent of it; we hope you will become an integral community member.' That will become one of my goals," Stanley said. "And I will further it by living on campus and by making every effort to be visible as possible to my fellow Spartans."

Stanley attended the meeting with his wife, Ellen Li, who is a biomedical researcher and gastroenterologist. Joining them were three of their four children.

MSU's new leader emerged from the university's first presidential search in more than 20 years. His tenure begins after longtime President Lou Anna Simon, the university's first female leader, resigned under pressure in January 2018 over her handling of the Nassar scandal. She, along with two other top former MSU officials, is facing criminal charges in connection with the scandal.

After Simon stepped down, the board appointed former Michigan Gov. John Engler to pick up the reins. Though Engler, a lawyer, led the university to settle a historic $500 million settlement with more than 500 of Nassar's victims, he resigned under pressure in January amid backlash over his comments about the survivors. Satish Udpa has been acting as MSU's president since.

Stanley, a Seattle native, has  led Stony Brook University on suburban Long Island for the past decade. While at the helm of one of the 62 universities that make up the American Association of Universities, he has helped run a national laboratory, increased the number of faculty, and boosted student diversity,

Stony Brook has an undergraduate enrollment of 17,364, according to U.S. News and World Report. By contrast, MSU is nearly three times as large with 50,351 students.

Board Chair Dianne Byrum and Trustee Melanie Foster, who co-chaired the confidential search, said during Stanley's introduction that they set off last summer to find the best candidate to lead MSU.

Byrum, along with Foster, said Stanley's academic credentials propelled his candidacy to the forefront.

"Today represents a pivotal moment in MSU's 164-year history as we begin what I am confident will be an engaged and exciting future under the leadership of Dr. Samuel L. Stanley Jr.," said Foster.

Stanley has a B.A. in biological sciences from the University of Chicago and earned a medical degree from Harvard Medical School in 1980.

During his tenure at Stony Brook, Stanley presided over its largest annual fundraising haul in its history, according to the school's website. He also championed the hiring of more professors, increasing the faculty by 240 positions over five years.

"This individual has proven experience in higher education," Byrum said. "I remember distinctly in those early input sessions where we were meeting with a student group and they said explicitly, 'Don't get us anybody that needs on-the-job training.'"

Additionally, Byrum said, the faculty wanted someone who had been through the ranks and had held various positions, including professor and up the ranks.

She said Stanley had all those credentials and more, having served on several notable committees, including the AAU board of directors and the board of the Association of Public and Land Grant Universities.

However, Byrum declined to address how many candidates MSU considered or the fact that the search was conducted in secret, saying only that it was important to attract the best candidate.

Besides his $800,000 base pay, Stanley's contract includes a clause that says the board may authorize a bonus of up to 20 percent of his salary after his annual performance review.

He also will receive health insurance, a university vehicle with a driver, a vehicle of his choice for personal use, mileage for any university business conducted in his personal vehicle and memberships with the University Club of MSU and Country Club of Lansing.

Stanley, along with his wife, will get their travel for the university reimbursed and be given tickets to MSU sporting events and university-provided housing. The university will pay for his moving expenses to relocate to East Lansing and will include storage for the first contract year.

Hopes are high for MSU's future after nearly three years of tumult, litigation, prosecution and costs stemming from decades of Nassar's sexual abuse and the institutional failures it laid bare.

Many observers stress the new leader's most pressing challenge will be to address the campus culture and heal the damage and division stemming from the scandal.

Though the university has taken steps to resolve the problems that allowed Nassar to flourish for decades, many say more work needs to be done.

Daniel Hurley, CEO of the Michigan Association of State Universities, said normally a new president needs to focus on working with state government and business leaders to set a direction for the university.

That will still be necessary for MSU's next president, but Hurley said the new leader will also have to spend time on campus to set "a very positive tone regarding culture."

"Given what MSU has been through," Hurley said, "the next president is going to have to focus on setting a positive tone around campus regarding a culture of respect, inclusivity, listening and civility."

Even national observers agree Stanley's first test will be how he responds to MSU's unique situation.

"Any new president has got to create a sense of optimism and hope and remind the university of its strength and impact on the larger world," said James C. Votruba, former president of Northern Kentucky University. "The university has to have the courage to learn from its mistakes and take action so those things don't ever happen again. It's important to be transparent and open ... He has to set a tone that some things will simply not be tolerated."

During the press conference, Stanley commented on Nassar's nearly three decades of sexually assaulting young athletes during treatment, calling it "a terrible tragedy" and especially as a physician, "a gross and incomprehensible betrayal of trust."

He said he planned to meet with survivors and their families.

Asked how he would change the culture at MSU, Stanley said it's not just about fixing procedures — though that is important — but about establishing a climate where people feel comfortable reporting sexual assault.

"I don't have the ability to change the culture at Michigan State University by myself," said Stanley. "It really requires all of us working together."