The top doctor for Michigan's Medicaid program has been placed on paid leave as state officials review allegations that he over-prescribed opioids. 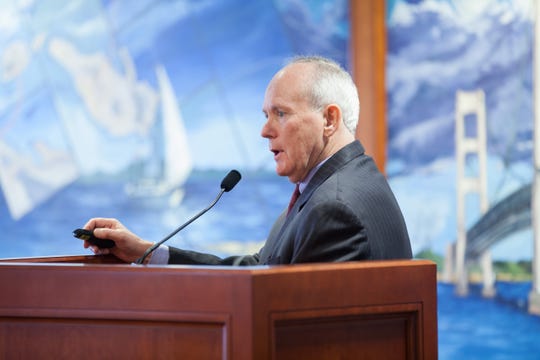 The top doctor for Michigan's Medicaid program has been placed on paid administrative leave as state officials review allegations that he over-prescribed opioids to patients in his private practice.

The state Department of Licensing and Regulatory Affairs filed a complaint with the Michigan Board of Osteopathic Medicine and Surgery on May 1, alleging that Dr. David Neff over-prescribed controlled substances to some patients in his part-time medical practice.

The complaint accuses Dr. David Neff of failing to exercise due care, conform to minimal standards of practice or utilize the MAPS system. He also allegedly requested data for other than a legitimate medical purpose from the Michigan Automated Prescription System, which tracks all controlled substance prescriptions written in the state.

On same day the complaint was filed, Neff was placed on leave from his $194,184-a-year position as Michigan's chief medical director for Medicaid, said Lynn Sutfin, spokesman for the Michigan Department of Health and Human Services.

"Dr. Neff is on paid administrative leave as we await a resolution of the administrative complaint issued by LARA," Sutfin said in a Thursday email to The Detroit News.

LARA investigators based the complaint on data from MAPS. They also reviewed the medical records Neff kept on 10 of his patients.

A call Thursday to Neff's private practice office in Okemos was not answered.

The complaint alleges that Neff prescribed higher doses of opioids to some patients than recommended by the U.S. Centers for Disease Control and Prevention. The federal agency urges doctors to limit most patients to no more than 50 morphine milligram equivalents per day for most patients or "avoid or carefully justify" doses of 90 MMEs or more.

Neff told LARA investigators that he currently treats about 85 patients in his part-time practice. He provides family medicine services to about 75 percent of them, but provides palliative care to the remaining 25 percent. Palliative care patients often have complex conditions or terminal illnesses that require higher-than-usual doses of controlled substances.

One of his patients, Jane Doe 1, was on a "high MMEs" regimen "that fell below the standard of care for the patient's conditions," according to the complaint.

A patient, Jane Doe 2, was prescribed 1,500 MMEs daily of Fentanyl patches.  The patches didn't adhere well, Neff said, so this patient would remove them before the full dose was used.

In another case, Neff rapidly decreased Jane Doe 4's dose from 980 MMEs to 420 MMEs without adequately documenting a reason for the reduction, according to investigators.

Michigan doctors have been required since June 1, 2018, to run MAPS reports before writing any prescription for more than a three-day supply of a controlled substance.

Neff has 30 days to respond to the complaint from the date it was filed by LARA. He could seek a compliance conference where he could provide testimony and evidence to a LARA representative and a member of the Disciplinary Subcommittee of the state Board of Osteopathic Medicine and Surgery. Or he could request a hearing before a state administrative law judge.

Punishments for the charges, if substantiated, are at the board's discretion and could range from a reprimand to probation, suspension or other sanctions.