Eleven bipartisan members of Michigan's congressional delegation trekked to the Des Plaines River in Illinois on Monday to tour the site of a future waterway project where officials hope to halt the progress of Asian carp toward the Great Lakes.

The lawmakers got an aerial overview by helicopter, as well as a ground-level briefing from the U.S. Army Corps of Engineers on its $778 million plan for stopping the invasive fish. The proposal includes fortifying the Brandon Road Lock and Dam near Joliet, which officials have identified as a choke point to halt the spread of the invasive species. 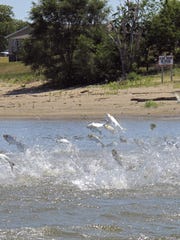 FILE - In this June 13, 2012, file photo, Asian carp, jolted by an electric current from a research boat, jump from the Illinois River near Havana, Ill. The governor of Illinois, Democrat J.B. Pritzker, is authorizing initial steps toward installation of technologies in a Chicago-area waterway to prevent Asian carp from reaching Lake Michigan. (AP Photo/John Flesher, File) (Photo: John Flesher / AP)

The multi-layered plan includes devices such as loudspeakers, electric shocks and air bubble curtains at the site between Lake Michigan and the Illinois River, which the destructive carp have overrun.

Congress still needs to authorize and allocate funding for the project.

"We all saw firsthand the importance of the efforts that can be undertaken to prevent this from getting in, and we've got to get it done as quickly as we can," said Rep. Fred Upton of St. Joseph, the delegation's senior Republican.

"Once we get the funds approved, they could begin the full design work as early as January."

Upton acknowledged the concerns from some corners about the $778 million price tag but said the initial estimate by the Army Corps could change as much as 60 percent up or down as the agency does more engineering and design work on the technology.

"They admit that they at this point in time have put in a high number only as a cushion until they can put in through the design process what they need because there are unknowns as they go into this area of dredging and some of the new technologies," said Sen. Debbie Stabenow, D-Lansing.

Stabenow, who co-chairs the Senate Great Lakes Caucus, said Lt. General Todd Semonite, chief of engineers, participated in Monday's events and reaffirmed the Army Corps’ support "for this being a top project for them to move forward on."

Monday's meetings were also joined by state officials from Michigan and Illinois, including representatives of the offices of Michigan Gov. Gretchen Whitmer and Illinois Gov. J.B. Pritzker, both Democrats.

"This is significant because the former governor of Illinois was not supportive of moving forward with this project, and it has a local share that’s required of 35 percent," Stabenow said, referring to former Illinois Gov. Bruce Rauner, a Republican.

Illinois, the project's non-federal sponsor, plans to spend $2.5 million for next year in part to acquire about 17 acres of land on along the river in to build the project, Upton said.

Some Illinois lawmakers have not supported the plan at Brandon Road, citing concerns about disrupting commercial vessels traveling the busy waterway.

Rep. Debbie Dingell, D-Dearborn, suggested that lawmakers convene the House Great Lakes Caucus in Washington before Congress breaks for the August recess to rally support for the project and "let them see our enthusiasm for it," Upton said.

"I think that we can" get Illinois members to back the plan, Upton said.

"That’s why our Great Lakes Caucus meeting will be important later this month. My sense is the Illinois folks have had their 'come to Jesus moment.' For a long time, they thought we simply wanted to stop the whole river, but now the corps has identified a way that can block the fish but keep the shipping open."