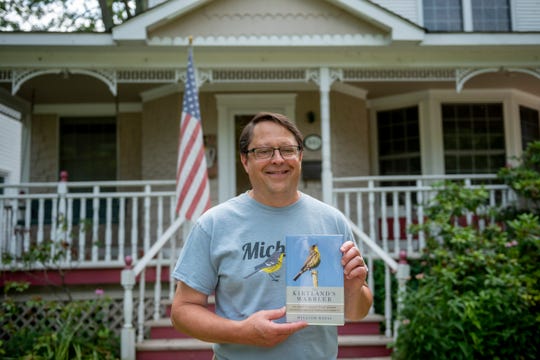 Bill Rapai, a book author and chairman of the board of the Kirtland's Warbler Alliance, at his home in Grosse Pointe. The Kirtland's warbler is about to be taken off the endangered species list. (Photo: David Guralnick, The Detroit News)

Any week now, the Kirtland's warbler will come off the endangered species list. Therein flies some problems.

The escape from federal protection, mind you, is good news. The Kirtland's warbler has been considered endangered since 1967, even before the passage of the Endangered Species Act.

But the warbler, which nests almost exclusively in the pine barrens of northern Michigan, is not out of the woods yet.

There's money involved, some $300,000 a year. There's gentle tweaking yet to be done with the bird's very precise habitat.

With human help, however, it has overcome the two greatest perils to its existence — a preponderance of brown-headed cowbirds, and a lack of forest fires.

It's still adorable. Still a tourist attraction. Still a far better choice than the boring ol' robin as Michigan's state bird, its fans will tell you, and they might soon try to make that official.

But it's not a bald eagle.

When the bald eagle soared from the ranks of the endangered and threatened in 2007, it just went about its business, being majestic and eating whatever looked tasty. The Kirtland's warbler, says chairman Bill Rapai of the Kirtland's Warbler Alliance, falls into the category of "conservation-reliant species."

In other words, it needs a continued helping hand from the same folks who helped foul things up in the first place. With bigger brains and bigger budgets, it remains our responsibility to monitor the ground-nesting warblers, support them, and OK, maybe fool them a little bit when it comes to the forests where they live.

It helps, Rapai says, that "he's a handsome little devil."

David Ewert of the American Bird Conservancy found this Kirtland’s warbler in the Bahamas, where the birds spend their winters. (Photo: David Ewert, Courtesy)

The more colorful male is six inches long, with a bright yellow breast and a bluish-gray back. "When he sings," Rapai waxes, "he throws his head up. You can see his throat and chest just pulsing."

Visitors have come from as far away as Japan to admire them. The least common warbler even in their replenished numbers, they are a coveted checkmark on bird-watchers' lists.

Though a few pairs have found their way to Wisconsin and some dally near Gladwin and Kalkaska, they basically breed and reside amid the jack pines of Oscoda, Crawford and Ogemaw counties.

Come late September or early October, the warblers relocate to the Bahamas, making the 1,500-mile trip in as little as eight days. Then by May, they pack up their tiny beach blankets and head back north.

"We don't really know" why they choose the Bahamas, says David Ewert, director of the Kirtland's Warbler Program for the American Bird Conservancy.

Mostly, he says, they prefer the island of Eleuthera, with its Caribbean pine forest and dense shrubbery. Given the possibility of frost in the Carolinas and Florida, "it might be the nearest spot where they can find a predictable supply of insects."

Or maybe they found a good deal on a timeshare. What's certain is that a species older than the ice age nearly vanished from the Earth.

The Kirtland's warbler wasn't discovered in the United States until 1851. Six years later, a naturalist at the Smithsonian Institution named the bird for Jared Kirtland, the Ohio doctor who had presented that first specimen to the museum.

The warbler's nesting range remained a secret until 1903, when an expert from the University of Michigan embarked on a quest to Oscoda County that required a train, a rowboat, a buggy ride and a hike. 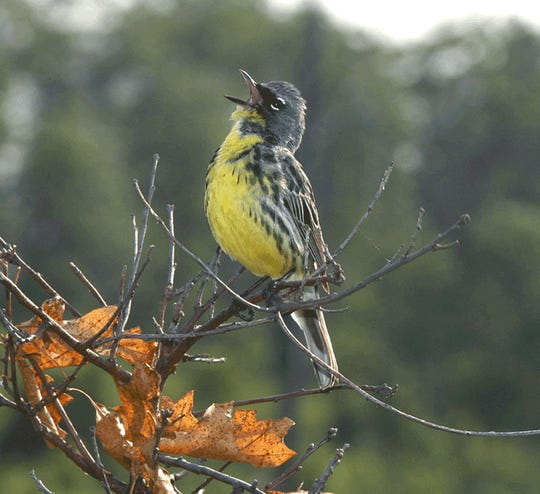 By the 1940s, researchers realized the population was faltering, and a survey in 1951 conducted with ears as much as eyes counted only 432 males singing their distinctive song, with its upward lilt at the end: chip-chip-chip-che-wee-wee! Figuring that warblers come in twosomes, they estimated a total of about 1,000.

As recently as 1987, the number of pairs was a dismal 167. But conservation efforts had taken wing.

One problem was the devious brown-headed cowbird, native to the Great Plains. The cowbird used to coexist with bison, eating the insects kicked up as the buffalo roamed. Always on the move, they would deposit their eggs in the nests of other birds.

With the bison largely wiped out, the cowbirds wandered north to Michigan, where Kirtland's warblers build their nests on the sandy soil beneath 5- to 20-year-old jack pines. Not only would the cowbirds trespass on the nests, they would remove as many warbler eggs as they laid.

The bigger, more aggressive cowbirds would hatch first and eat the remaining warblers' share at mealtimes. Rapai, the author of "The Kirtland's Warbler: The Story of a Bird's Fight Against Extinction and the People Who Saved It," says the solution was relatively simple:

Trap and remove the brown-headed cowbirds.

Historically, says Dan Kennedy of the Michigan Department of Natural Resources, forest fires would provide the Kirtland's warbler with the younger trees it needs. New pines would grow where old ones had burned, and the warblers could build their nests where low branches would shield them from predators.

With the influx of people in the vicinity, forest fires became frowned upon. The solution, Kennedy says, has been to auction stands of trees to timber companies, selling the mature jack pines and ultimately creating new nesting areas.

The complication is that jack pines provide lousy wood, suitable mostly for pulp or mulch.

"It's a struggle for us to market as a viable product," says Kennedy, the DNR's endangered species coordinator. "They're so close together, they don't grow very straight or very fast."

With the resurgence of the warbler population, the preservationists and timber companies have been able to experiment, spacing the trees and mixing more useful red pines in with the jack pines. Tree growing being a process that requires patience, the results won't be known for a few decades.

The last tally was about 2,400 of them, enough to prompt the U.S. Fish & Wildlife Service to begin the process of delisting. But it takes time to get all the ducks in a row.

Spokesperson Georgia Parham describes it as a "fairly complex process," far more than just drawing a line through an entry in the Endangered Species Act of 1973.

The published result is known as a rule. The rule that helped save the warbler was 25,076 words long, so the one that dismisses it will take some tweaking.

The warbler's friends had hoped to see the announcement in June. The forecast now is for late July, or even August.

But it's safe to say the Kirtland's warblers aren't going anywhere, except south for the winter.

What's left on Rapai's to-do list is to elevate the Kirtland's warbler to what he considers its rightful place as Michigan's state bird.

The robin, he points out, is also the state bird of Connecticut and Wisconsin, and why share?

Michigan has a monument to the Kirtland's warbler, ranked by Skyscanner.com at No. 3 among things to do in Mio. It has Kirtland Community College, with a central campus in Roscommon and three others in the state's largest community college district.

"Show me a monument to a robin in Michigan," says Rapai, who lives in Grosse Pointe. "The Kirtland's warbler is Michigan's story."

The robin, with its dreary Latin designation Turdus migratorius, became our official bird in 1931, two years after a statewide vote by schoolchildren. Rapai says he's found some fine print in the selection: the legislature adopted the robin with a simple resolution, which should have expired along with its term.

The chickadee finished second, and a bill to promote it over the robin was introduced in 2000. The argument was that it's a year-round resident, content to weather Michigan winters. But the chickadee is already the state bird of Maine and Massachusetts.

"Nothing says we care about our wildlife and our natural resources more than the Kirtland's warbler," Rapai says.

It's a revenue generator. It's a native.

It's a bird with improving numbers, and he wants a recount.