The National Weather Service recorded a high of 93 with a heat index of 107 degrees Friday, and even more heat and humidity is forecast for Saturday

Detroiter David Morgan, a dock worker at the Salvation Army Detroit Warehouse, wears a towel around his neck as he takes a drink of ice water during a break along Fort Street on Friday afternoon. (Photo: Todd McInturf, The Detroit News)

It's hot in Metro Detroit and it feels even hotter.

There's also a threat of severe thunderstorms, which could bring some relief but lead to power outages.

Residents are coping as best they can. The fortunate ones are staying inside in air-conditioned comfort, while those who have to be outdoors for work or other reasons are using a variety of strategies to battle the heat.

“It’s hot," said Romjan Ali of Warren, an attendant at Supreme Parking in downtown Detroit. "I feel like I sit in the middle of the fire, but a lot of wind came and helped us.”

As business slowed in mid-afternoon, he walked across Cass Avenue to the Fort Washington Plaza building, keeping watch on his lot from its air-conditioned lobby.

Safety officials say the combination of near triple-digit temperatures and high humidity creates conditions that can be dangerous and urge residents to take precautions.

Detroit Deputy Fire Commissioner David Fornell said people should minimize their time outside and stay hydrated. He warned against drinking alcohol and coffee, instead suggesting water, Gatorade or other drinks that replenish electrolytes.

Other tips: wear light-colored clothing and seek shade whenever possible.

Fornell also urged people to keep on eye on their neighbors, and if someone looks dizzy or overheated, "invite them in, give them something to drink, and if there is any doubt call 911. That's what we're here for."

The same goes for pets. The Humane Society urges pet owners to protect their companions by limiting the length and intensity of outdoor exercise, providing ample shade and water, using a cooling body wrap, vest or mat, and keeping animals out of parked vehicles.

The Michigan Humane Society's cruelty team has responded to calls daily this week about dogs left in inadequate conditions for the weather, and its Detroit clinic treated two canines that died from heat-related illness, spokeswoman Anna Chrisman said.

At the Pontiac-based Michigan Animal Rescue League, "we've definitely seen more strays with heat exhaustion than normal," said Kathleen Craig, its dog care coordinator. Signs can include excessive panting or wobbliness, and canines at greatest risk can include breeds with thicker, heavier coats, she added.

"If you see any signs like that ... you want to try to get them in the shade," in air-conditioning or even to a kid-sized pool, Craig said. "It’s important to be vigilant."

Dangerous heat has set up across southeast Michigan. Excessive Heat Warnings and Heat Advisories are in effect through tomorrow evening. For heat safety tips, visit: https://t.co/bq0YLKMDlE#miwx#nwsdtxpic.twitter.com/VCMYoe2JBm

Public safety and utility officials have spent days getting ready for the late-week temperature spike.

"We’re preparing crews and having them on standby," he said. "It's all hands on deck."

DTE power usage was expected to be up by 50% Friday and Saturday over a typical summer day, Stowe said.

"We’re going to see some outages, no doubt," he said. "It’s really not the heat … it’s the extra usage and demand on the system ... Overall, we think we’re in really good shape. We have all of the power plants running but know that there could be a weak spot here or there."

“I don't know about DTE, but we’re also seeing energy use that’s 50% above a typical summer day," he said. "We have the energy supply and grid that’s able to meet the needs of our 1.8 million Michigan customers.” 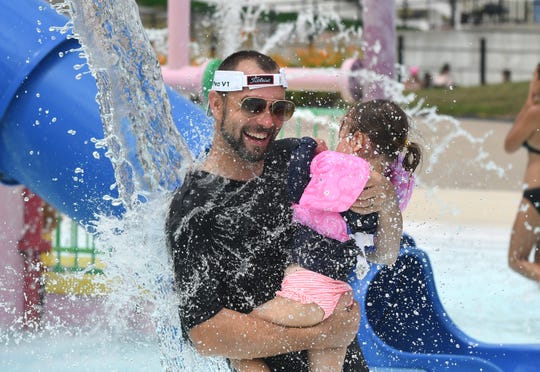 The recent stretch of high temperatures caused pavement to heave on the westbound Interstate 94 service drive near Merriman Road.

Workers for the Michigan Department of Transportation finished repairing the damaged asphalt Friday but other road projects scheduled for this weekend might be canceled if the heat becomes "any more extreme" or if storms hit, spokeswoman Diane Cross said.

"The heat can make the asphalt materials pliable, and in its pliable state very heavy trucks can make dents or ruts in the road," she said. "Which is a problem when other heavy trucks and motorcycles drive over the ruts because it's no longer a smooth surface."

Air quality is also an issue when the mercury nears triple-digit territory.

The weather service advises people with respiratory diseases such as asthma to limit prolonged outdoor exertion.

There is a bit of good news as the heat cranks up: Relief should begin Sunday, when the weather service forecasts a high of 85, and continue through next week, with highs around 80 Monday through Wednesday.