In a 5-2 ruling, the Michigan Supreme Court found a police officer's entry into a woman’s apartment and her warrantless arrest were "unreasonable”

A police officer made an "unreasonable" arrest of a West Michigan woman inside her apartment without a warrant, the Michigan Supreme Court ruled Tuesday as it questioned some evidence that helped convict her of drunken driving and leaving the scene of a crash.

Jennifer Hammerlund was sentenced to four months in jail and five years of probation after being convicted of operating while intoxicated, third offense, and failing to report an accident resulting in damage to fixtures.

But Hammerlund argued her Fourth Amendment rights were violated during the 2015 arrest in her home and any evidence gathered after that point — including two alcohol breath tests showing she was over the legal limit — should be excluded from the court case.

In a 5-2 opinion, the Michigan Supreme Court agreed and sent the evidence issue back to the trial court.

“We think that society would recognize defendant’s behavior as preserving a reasonable expectation of privacy,” wrote Justice Megan Cavanagh, a Democratic-nominated candidate who was elected in November.

“In fact, we would venture that what society would not view as reasonable is exactly what occurred in this case — that a person suspected of a minor misdemeanor could be subjected to a warrantless arrest inside her home in the middle of the night.”

Even if police improperly entered Hammerlund's home, it doesn’t warrant the exclusion of the evidence gained after the arrest, which included blood alcohol test results, Zahra wrote in the dissent joined by Markman. 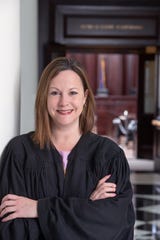 Prior court rulings were “not intended to grant criminal suspects … protection for statements made outside their premises where the police have probable cause to arrest the suspect for committing a crime,” he wrote.

The high court's decision reinforces basic criminal procedure that requires a police officer in most cases to obtain a warrant before entering a person's home, a precedent stressed in recent U.S. Supreme Court cases emphasizing the home as "the essential locus of privacy in our society," said Adam Candeub, a professor of law at Michigan State University.

"If the sanctity of the home means anything, it should prohibit the police from grabbing you while you’re standing in the hallway," Candeub said.

The case dates to September 2015, when Hammerlund, who had just finished a bartending shift, crashed her vehicle on an exit ramp in Wyoming at about 2:20 a.m. after she said another driver cut her off. Instead of calling police, Hammerlund attempted to call her insurance company and used a rideshare service to go home, according to the high court's summary of the case.

After obtaining Hammerlund’s address from the wrecked car, police visited her apartment a couple hours after the crash and spoke with Hammerlund from her front porch. Hammerlund stayed 15 to 20 feet away from the door and passed her identification to her roommate, who handed it to police, according to the court's summary.

When Hammerlund reached through the door to take back her ID, a police officer “grabbed her by the arm and attempted to take her into custody.”

“He said that when defendant pulled away he grabbed her again and ‘the momentum’ took him inside the home two to three steps where he handcuffed defendant and completed the arrest,” the opinion said.

Hammerlund’s blood alcohol content later tested over the legal limit at 0.22 and 0.21. Police contend she told them she drank alcohol after finishing her bartending shift, but she later said at trial she drank after the crash because she was “really shaken up.”

A Kent County trial court and later the state Court of Appeals ruled Hammerlund’s arrest was lawful because the officer’s entrance into the home occurred when he was “clearly in pursuit for the arrest.” The court denied a motion to suppress evidence obtained after the arrest.

There was no emergency creating a need for a warrantless entry in Hammerlund’s home nor was she in a public place just because she reached through her front door to take her ID, Cavanagh wrote.

“Answering a knock at the door or speaking with officers does not destroy an occupant’s right to maintain a reasonable expectation of privacy from unreasonable intrusion,” she said.

In a dissent, Zahra opined that the location and circumstances surrounding the arrest passed constitutional muster because Hammerlund was essentially in a public place when she reached across the threshold for her ID because she was “exposed to public view, speech, hearing and touch.”

In addition, the officer’s knowledge of Hammerlund’s past arrests for drunken driving and the perception that she was slurring her words could have served as cause for pursuing her inside for an arrest, he wrote.

The doctrine of "hot pursuit" usually allows police to follow a suspect into a home, but Hammerlund's case was a far cry from anything so pressing, said David Moran, the director of the University of Michigan Law School's Innocence Clinic.

Furthermore, to maneuver Hammerlund into a public place by "dangling a document" at the door is a "pretty gross evasion" of other rulings related to arrest procedure, said Moran, who was a consultant to Hammerlund's lawyer in the case.

"The easiest thing for police to do is say, 'Ma’am, can you please step outside,'” Moran said. Nothing in the opinion challenges that practice, he said, "but it just drives home the point that if the person says, 'No, I won’t come out,' then they’ll have to go and get a warrant.”

Even so, the state Supreme Court's ruling doesn't guarantee the exclusion of evidence gained after the arrest, Moran said. Exceptions to exclusion include whether the evidence would have been inevitably discovered or if the evidence was not directly linked to the police activity found to be unlawful.

"The (trial court) judge will have to consider all of that," Moran said.