A 34-year-old U.S. Army Reserve soldier from Michigan died Monday in Virginia when a tree fell on him, and two others were injured, during a training exercise, the Army has announced.

Killed in the incident was Kevin Sullivan, 34, of Chesaning in Saginaw County. 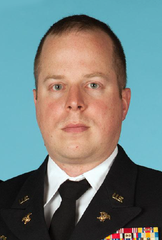 During the exercise at Fort Pickett, Virginia, severe weather rolled through and knocked down a tree, the Army said, hitting Sullivan and two soldiers parked in an armored Humvee. This happened during a training event called Quartermaster Liquid Logistics Exercise — Enhanced 19.

Sullivan, a chief warrant officer, is survived by his mother, father and sister, the Army said in a statement. Sullivan was a petroleum systems technician, according to the statement.

The injured soldiers are assigned to Kinston, North Carolina, and were treated and released.