Aaron Hull, head of the Border Patrol's El Paso Sector, will be reassigned to Detroit on Monday, CBP officials said

Detroit — U.S. Rep. Rashida Tlaib said she fears a border patrol chief being reassigned to Michigan on Monday "will bring the inhumane conditions and dehumanizing behavior I witnessed at the southern border to Metro Detroit."

Tlaib responded to the news, saying she toured the CBP Station 1 and the Clint, Texas, facility in question with Hull and feels he "has been trained to address the humanitarian crisis at the border in a way that would hurt our communities at home."

"Although Chief Hull was following orders from the top, we cannot accept that as an excuse," Tlaib said in a statement. "Chief Hull has done the bidding of this administration with intolerable consequences for immigrants, and even to the detriment of his own agents.

"I witnessed agents breaking protocol in front of Chief Hull while on my tour, which makes me concerned he allows bad behavior to continue without accountability," she added. 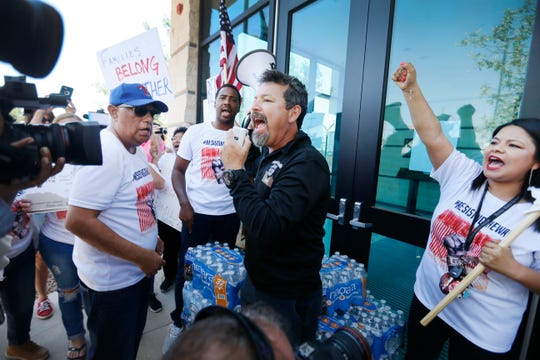 Fernando Garcia, Border Network for Human Rights executive director, says some words of encouragement to protesters at the Border Patrol station in Clint, Texas, on June 27. The protesters gathered in opposition of the alleged mistreatment of migrant children at the station. (Photo: Briana Sanchez, AP)

Border officials said Hull is not the only high-ranking agent being reassigned.

"Multiple members of the Border Patrol's senior leadership team are currently rotating on (temporary duty) assignments in both Headquarters roles and senior field positions nationwide," according to the CBP official.

The purpose of Hull's reassignment was not immediately clear but comes after a series of reports of unsafe and unsanitary conditions at El Paso's border stations.

David Dudenhoefer, GOP spokesman for Michigan’s 13th District, said Hull will face less of a challenging border environment in Michigan but expects him to carry out the law as written.

"It appears Hull was faced with difficult choices, given a lack of resources and adequate funding due in largess to the political gamesmanship of the legislature," Dudenhoefer said. "The influx of migrants has more to do with our policies which encourages them to leave countries whose economies are ravaged by drug cartels, corruption and our interventions and to come here."

Dudenhoefer said politicians are using immigration "as a political talking point to gun up their respective bases for purpose of winning elections. ... Ultimately, the end result of our political leaders' failures is a loss of liberty for everyone."

NBC News reported that Hull oversaw the Texas facility that, at one point, held 700 children when it was built for 100. The report, published on July 9 by The New York Times and El Paso Times, alleges that agency leadership knew for months "that some children had no beds to sleep on, no way to clean themselves and sometimes went hungry."

"Simply a volume issue, we don’t want to hold that many people in our short-term facility any more than we have to," Hull told NBC News. "We’ve added showers, laundry facilities… keep in mind this is the U.S. government. We have an entire contracting process. The illegal alien traffic is always going to be one step ahead of our ability to respond."

Most recently, a girl reported on March 12 that she had been "beaten and abused" while in custody at the facility in Clint, Texas. The Clint station quickly filled up at one point this spring with some 350 children, including toddlers and at least one infant, according to ABC News.

Tlaib, who grew up in the northern border, said the issue hits home for her as she watches the growing militarization of southwest Detroit neighborhoods.

"We must protect our residents from being targeted and becoming victims of the broken system," she said. "CBP has a culture that dehumanizes immigrants, and excuses about a lack of resources and funding are flimsy and certainly no justification. Our communities and the families in them cannot truly be safe if CPB is not held accountable."