Orlando Flowers was convicted of first-degree murder for his role as an accomplice in the Jan. 12, 1998, execution-style killing of DiCondi Cooper. 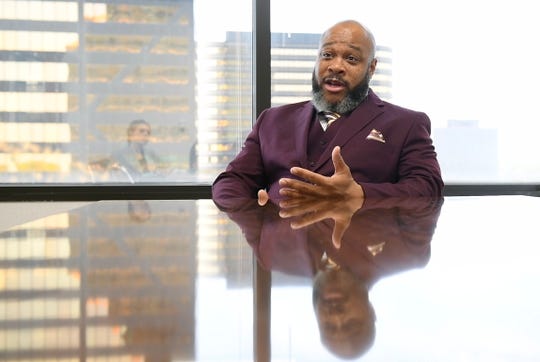 Orlando Flowers was convicted of first-degree murder for his role as an accomplice in the Jan. 12, 1998, execution-style killing of DiCondi Cooper, 22, in Detroit. (Photo: Daniel Mears, Detroit News)

Orlando Flowers said he spent the early part of his life as "an enemy to myself."

He was loyal to friends, to a fault, he said, and pins a conviction that landed him in prison for life on a "wrong decision" to involve himself in a situation that turned tragic.

Flowers was convicted of first-degree murder for his role as an accomplice in the Jan. 12, 1998, execution-style killing of DiCondi Cooper, 22, in Detroit. The shooting stemmed from a dispute over stereo equipment.

The 49-year-old served about 12 years of his life sentence after spending some time out on bond. He was paroled in February.

“What caused me to go to prison was I made a wrong decision,” said Flowers, who contends he’d gone along with a friend that day “to sell a gun."

"It resulted in me going to prison for a long time," he said.

He was sentenced to life without parole. But after receiving a commutation, Orlando Flowers wants to make a difference in his community The Detroit News

The heinous act has haunted Cooper's family, and Flowers' release, they said, was hard to take.

"What he did was more of an adventure or a thrill-type crime, not one of trying to come out financially ahead," Cooper's 76-year-old mother, Diane Cooper, said of Flowers. "The things that they were taking, which was recording equipment, was not worth a whole lot of money."

Cooper said she's puzzled by Snyder's decision and "sorry that he did it."

"I don't think he could have seen the whole picture," she said. 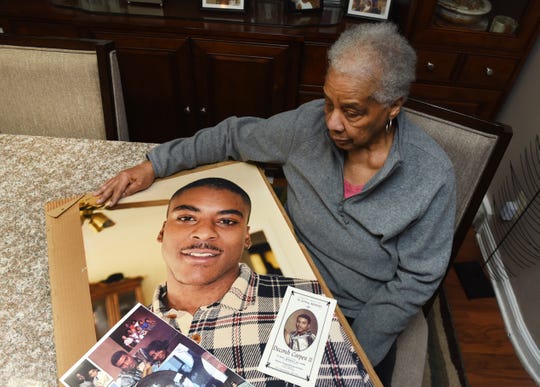 Diane Cooper of Detroit looks at a photograph of her son, DeCondi, who was killed in 1998. (Photo: Max Ortiz, The Detroit News)

Cooper's life ended in the basement of the Detroit home he shared with a childhood friend after being shot with an AK-47. The crime also left Cooper's roommate and girlfriend severely injured.

Flowers said he regrets the crime and pain that his choices caused his family.

“I know that I can’t bring him (Cooper) back, but I can live my life to honor his name," Flowers told The News in an interview at the offices of the Chance for Life, a Southfield-based nonprofit that offers a life skills curriculum to inmates.

"That was a pain that even dwells in me today," he said. "That I was present, that I was there when somebody lost his life."

Wayne County prosecutors painted Flowers as the mastermind of the crime, even though he didn't pull the trigger.

"His approval and counsel was sought and obtained before the attempts to kill these victims began," the prosecutor's office wrote in a November letter to the state's parole board opposing Flowers' release. 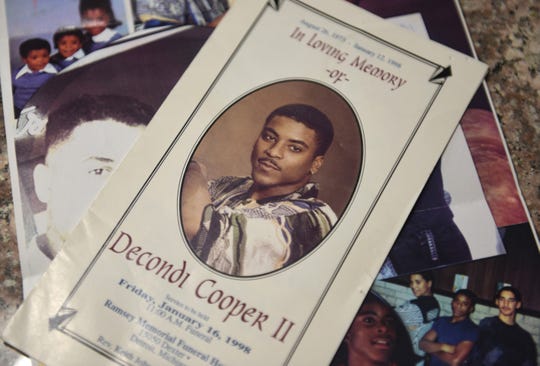 DeCondi Cooper died in an execution-style killing in Detroit when he was just 22 years old. (Photo: Max Ortiz, The Detroit News)

Flowers, then 27, drove himself and co-defendant Eric Woods to the scene of the crime, brought the weapon into the Detroit home, wore gloves and gathered the musical equipment that they came for, prosecutors said.

Victims were made to crawl to the basement, kneel on the floor, and Woods, “sprayed them with bullets." Prosecutors said Woods shot Cooper multiple times, including once through the heart.

Cooper’s roommate, Ricci Wafford, survived the attack. Cooper's girlfriend, Melissa Coleman, was struck multiple times while driving away from the home. The powerful blast from the AK-47 left her arm "dangling at her side." But she also survived.

Wafford and Coleman did not submit letters opposing Flowers' release, nor did they appear at his public commutation hearing last fall, according to records. Attempts to reach them by The News and Wayne County Prosecutor's Office were unsuccessful.

Prosecutors, in the 11-page September letter, argued Flowers "continues to minimize his guilt" and say "he was merely present with no knowledge that his co-defendant would kill anyone."

Flowers said he knows he can't change the position of prosecutors and accepts "that's part of life."

"You are always going to have people that's not for you," he said. "When you're given these opportunities, you have to show them why you are worthy to receive a pardon or a commutation. I'm out here now, making a difference. I'm staying away from foolishness."

Flowers had his first stretch of freedom in 2007 when he was released on bond for eight years pending a new trial.

During that time, he met his wife, had a daughter and started a home remodeling and landscaping business.

The state Court of Appeals later reversed the decision, and the state Supreme Court declined to hear his appeal.

Multiple friends, relatives, clergy and the judge who presided over Flowers' trial provided letters and in-person testimony, advocating last fall for his release.

“Had I been the finder of fact, I would have not found you guilty," Third Circuit Court Judge Deborah A. Thomas said during Flowers' commutation hearing in November. "I believed then, and I believe now, that you were a victim as well as those who lost their physical lives."

Cooper said at the time of the killing, her son had recently returned home to Detroit to pursue his dream of launching a recording company after two years at Ferris State University. He'd had a job interview and wasn't supposed to be there. But the crime unfolded before he left, she said.

"There's a big hole in my family as far as him not being with us," she said.

Flowers credits his faith and ties to Chance for Life for his commutation. It's a program, he said, that helps individuals see their "faults" and "misdeeds."

Flowers said he first learned that Snyder had granted the commutation from a prison officer who printed off the announcement and brought it to him. He applied for a commutation of his sentence on Dec. 18. 2017.

"When I saw my name, my heart just dropped," he said. "At that point, I went back down to my cell and fell on my knees and thanked God."

He said he hopes to use his life story to change the culture of the younger generation and prevent future tragedies.

"I know that when I walked out those gates that my work is just beginning and that God has a plan for me," he said.