Astronaut Shane Kimbrough hoped that his story would inspire the next generation, possibly encouraging them to participate in future space efforts

Ann Arbor — When an astronaut visits a children's hospital, kids will ask whatever's on their minds.

"What happens to a fart in space," one child asked in a written question for astronaut R. Shane Kimbrough.

"Well, they're propulsive in that environment, so you can actually move," Kimbrough said amid a smattering of laughs in the room.

At a gathering in a playroom at C.S. Mott Children's Hospital, the NASA astronaut shared the story of his career since joining NASA in 2000  with a group of about 10 captivated and often squirming patients. 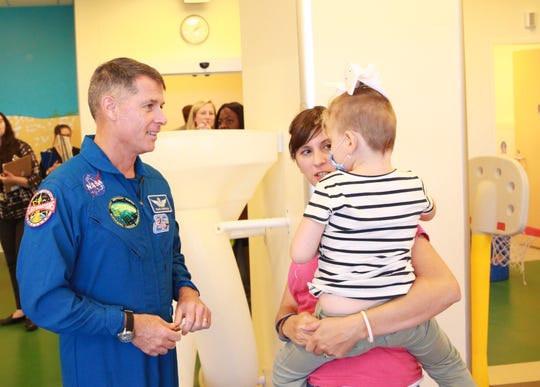 NASA astronaut Shane Kimbrough takes some time with with Izzy Caudill, 4, and her mother, Stephanie Caudill, 31, of Milan at an event at C.S. Mott Children's Hospital at the University of Michigan on Thursday. (Photo: Evan James Carter, The Detroit News)

Kimbrough said he wanted to talk about being selected as an astronaut and going to space to inspire the next generation into aiming for the next step in space travel: Mars.

"Maybe I'll get a chance to go see (the moon) one day, but if not, some of these folks in your generation will be going and living on the moon and potentially Mars ... in about 20 years, 30 years," Kimbrough said. "I'll be a little too old for that, so I'm counting on you folks to go to that for me."

Kimbrough of Texas, wearing his flight suit said it was special to be asked to speak to children about his work with NASA.

After answering questions about his time in space and what it's like being an astronaut, Kimbrough spent some time talking with children and signing autographs.

Kimbrough kneeled as Ethan Koch, 11, of Utica told the astronaut about his action figures.

"Do you play with those guys all day? What's his name," Kimbrough asked.

Bryan Finn, 17, spoke with Kimbrough before the event about what it takes to be an astronaut.

"(Kimbrough's visit) shows me anything is possible. I can do what I want," said Finn of Allen Park. 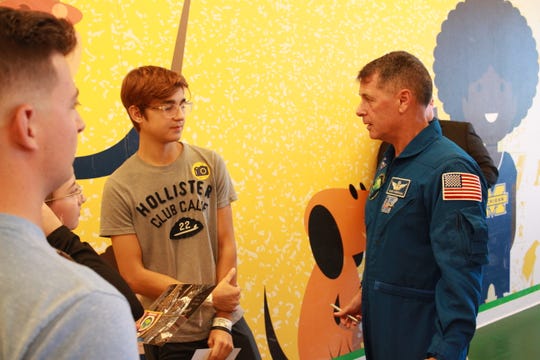 Kimbrough grew up i as the United States was building up its space program in competition with the Soviet Union. His most recent mission to space was on a Russian spacecraft that ended in 2017.

Referring to the experiments he and other colleagues did on the International Space Station, Kimbrough said: "We don't do them for NASA or us, we do them for all of humanity."

Kimbrough became an astronaut in 2004, according to his NASA biography.

He completed his first space flight and participated in two spacewalks in 2008. He served as commander of the International Space Station until April 2017.

Kimbrough said the trips in space showed him about Earth's fragility and how to appreciate the planet.

"The beauty of planet Earth is just striking," Kimbrough said. "It doesn't matter where you are around the world when you're trying to take pictures. It could just be random places that you've never thought of and they all have their own striking beauty."