Michigan is the 4th largest state for refugee acceptances since 2012. The number has since declined by 86% and foundations

Detroit — Two foundations and a national nonprofit are joining forces in Michigan as past and current immigration policies are forcing aid groups to downsize, suspend operations or limit help.

The Southeast Michigan Immigrant and Refugee Funder Collaborative on Thursday released a report outlining challenges facing organizations that provide immigration and refugee support. The study found immigrants and refugees lack access to services and face poor public perception, and that insufficient funding for services because of a dip in federal funding — the result of fewer immigrants and refugees entering the country — limits what they can do. 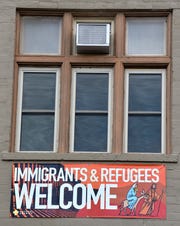 The words 'Immigrants & Refugees Welcome' on a banner on the north wall of the Central United Methodist Church in Detroit in July encouraged presidential candidates to 'embrace bold pro-immigration policies. (Photo: Todd McInturf, The Detroit News)

The agencies say past and current immigration policies have shrunk the nation’s refugee program and have left groups having to consider suspending operations or downsizing. The lack of funding also affects organizations that aid integration after resettlement of immigrants and refugees.

“Organizations serving refugees and immigrants are facing increased financial pressures due to decreases in federal assistance and (there's a) growing need for supporting these members of our community,” said Mariam Noland, president of the Community Foundation for Southeast Michigan.

The Community Foundation for Southeast Michigan joined with Grantmakers Concerned with Immigrants and Refugees, and the Kresge Foundation to create the collaborative. The groups came together after conducting a yearlong study to gauge the effects of federal funding cuts on Michigan nonprofits that offer immigrant services.

The goal is to fill the gap with community philanthropy after cuts in federal funding,said Noland. The group collectively has committed $450,000 over the next two years for immigrant and refugee organizations in the five counties of southeast Michigan.

Federal funds for Michigan through the Refugee Cash Assistance program and the Refugee Medical Assistance program have declined, along with the number of refugees receiving money under the program, Temporary Assistance for Needy Families, the report found. Due to the decline in funding, grants to Michigan from the U.S. Office of Refugee Resettlement for social services have increased, though nowhere near what is needed, according to the study.

From fiscal year 2012 through 2018, Michigan was the fourth largest state in the country to accept refugees, behind Texas, California and New York. The number of refugees resettling in Michigan has declined 86% since fiscal year 2016. 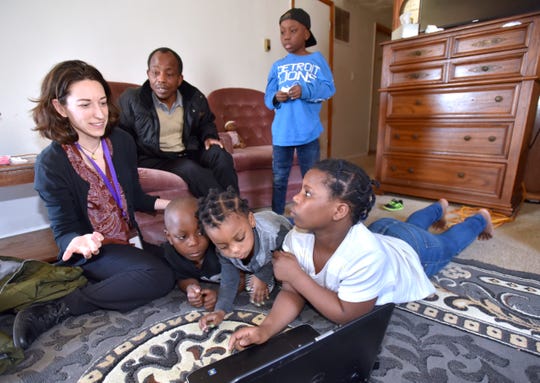 Steve Tobocman, director of Global Detroit, which studies the economic impact of refugees in the region, said organizations like his have adapted to changes by raising more revenue through philanthropic donations, optimizing their operational structures, and relying on volunteer staff.

"The impacts will continue to be felt by the region despite Trump trying to keep the cap low," said Tobocman, former Democratic floor leader for the state's 12th District. "There are growing needs, and the philanthropic sector stepped up to meet those needs. Western societies use other resources for language education, job integration, access to housing and things to get integrated into society, but America has long relied on historic integration," leaving immigrants to adapt with less assistance.

Despite the reductions in refugee arrivals, the need for services for those already here continues to grow, the study found.

"Immigrants are learning English faster than ever and there is a need for support to make that happen," Tobocman said. "(The collaborative) helps our region to jump into a national best practice on how the private sector helps newcomers. What’s also exciting is they’ve already been able to get national funding, which we don’t usually see."

However, in order to qualify for grants from philanthropic organizations, service providers must often creatively fit their programs and services into categories that may not match in definition or design of grant providers, the report found.

If southeast Michigan’s immigrant and refugee communities are to thrive it is important for service providers and grantmakers to help build a better infrastructure of support, the study said.

Surabhi Pandit, senior program officer of the Community Foundation for Southeast Michigan that launched the effort, said the findings confirm what nonprofits that aid refugees and immigrants have been telling her.

The findings show ..."they are working really hard with limited resources and how philanthropy can play a unique role in some of those unmet needs," she said.

The Trump administration's decision to shrink the nation’s refugee program has led to layoffs at resettlement agencies in Michigan. Some aid offices were told to prepare to suspend operations, downsize or combine with other locations.

The U.S. Department of State in December told nine nonprofit resettlement agencies it works with nationally that the administration’s new limit on refugee admissions — down nearly 60% from 110,000 in 2017 to 45,000 in 2018 — means it doesn’t require such an extensive network of resettlement offices.

The steep decline is reflected in southeast Michigan, where refugee-friendly cities such as Troy and Sterling Heights have seen resettlements that once averaged hundreds per year drop to single digits.

"We’ve seen the impact of ... these foundations who are concerned about investing in immigrants, and we're very excited with the leadership of the community foundation that will be helping our society as a whole," Tobocman said.