If you've heard of hemlock woolly adelgid, New Zealand mud snails or oak wilt, then you may be aware they are invasive species in Michigan.

But for those uninitiated to the potential damage from these kinds of flora and fauna, the Michigan Invasive Species Grant Program has attempted to remedy that by delivering grants for projects to protect the state's forests and waterways. 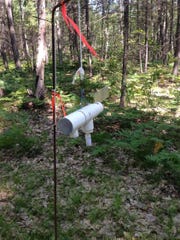 This beetle trap helps researchers at Michigan State University determine when beetles are actively spreading oak wilt and when pruning oaks should be avoided (Photo: Michigan Department of Natural Resources)

Since its inception in 2014, the state has allocated more than $18.5 million in grants to some 112 projects involving more than 35,000 acres of land and water statewide, officials said.

Now, residents can learn details about those efforts through an online story “map” that includes tracking progress and funding.

The multimedia tool was launched last month, weeks before Tuesday's deadline for universities, nonprofits and governments to present their full project proposals in the grant program's next funding cycle. The winners are expected to be announced in early 2020.

Coordinators say the online map gives a close-up view of how advocates, professionals and others are working to protect the state’s forests, waters and open spaces.

“We feel the program has done a tremendous amount of work, but we wanted to make sure we had a place where people can find that out,” said Joanne Foreman, the invasive species communications coordinator with the Michigan Department of Natural Resources.

The DNR, along with the departments of Environment, Great Lakes and Energy and Agriculture and Rural Development, oversees the grant program, which this year had $3.6 million available for projects.

State officials define an invasive species as one that is not native and whose introduction would likely harm Michigan's economy, environment or human health.

Also emphasized are efforts to boost public awareness of decontamination practices that can limit their spread, such as ensuring that vehicles and recreational gear remain free of plants and other debris.

The new MISGP map highlights the previous winners as well as provides summaries of grant-supported studies on managing invasive species such as Eurasian watermilfoil, and phragmites.

There is also an interactive funding dashboard that allows users to cross-reference grant funding by project category, recipient type and grant-to-match ratio.

“We thought it was really important for people to see their dollars at work," Foreman said.

The site also shows the projects of Cooperative Invasive Species Management Areas, in which regional groups work together to boost awareness as well as help in reducing the spread of invasive flora and fauna.

Informing the public about the work through the online tool helps in spreading the word and raising awareness, said Chris Bunch, executive director at the Rochester-based Six Rivers Land Conservancy, the fiduciary for the management areas.

“The more pathways and platforms to reach out to people, the better it is.”