Supreme Court justice says "God drew me back" after a period of disillusionment when he was young.

Hillsdale — Supreme Court Justice Clarence Thomas discussed his journey away from and back to his Christian faith Thursday at a dedication ceremony for Hillsdale College’s newly-constructed Christ Chapel.

“My life was changed through prayer at a place of worship," Thomas told a crowd of about 800 people inside the newly constructed chapel. "Although I was raised Catholic and spent four years in the seminary ... I became greatly disillusioned from the church, and made the mistake of angrily storming away in impetuousness of youth.” 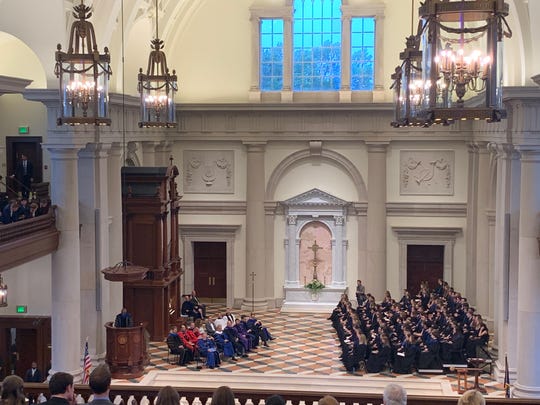 After more than two years of construction, Hillsdale’s chapel is nearly complete. Thomas visited the conservative liberal arts school for the celebration, along with Pat Sajak, the "Wheel of Fortune" host who is co-chairman of the college's Board of Trustees, and Mollie Hemingway, senior editor of the Federalist, a conservative online magazine.

Hillsdale College President Larry Arnn said the dedication ceremony would not be right without the proper speaker. He said he needed somebody who represented the four things the college stands for: character, faith, dedication to high learning and freedom.

“Think of those things together. Who would be like that? Clarence Thomas,” Arnn said as he introduced the justice to the pulpit for his remarks.

Thomas, who was appointed to the nation's highest court by President George H.W. Bush, said he gave little attention to God during law school and young adulthood, but this changed soon after he joined President Ronald Reagan’s administration.

“I was in the midst of one of the darkest periods of my life. I was running a federal agency under significant public scrutiny and criticism … life seemed hopeless and like I had nowhere to turn,” Thomas said. “But in the midst of this time, God drew me back to the church.”

Thomas said the chapel is especially necessary for Hillsdale’s students.

"They need a place where they can go to be relieved of their troubles and what they are bearing as so much comes at them so fast. By building this chapel, Hillsdale College has provided that space where students can come to discern God’s calling, to pray through difficult times, and to praise God for his faithfulness.”

Hillsdale is a private college with more than 1,400 students. It does not accept federal funding and relies heavily on donors. The school is comprised of mostly Christian students, though neither students nor faculty are required to sign a statement of faith to attend the school.

“By constructing this chapel, the college upholds the importance of its Christian roots, even as it respects the rights of each person to worship God according to the dictates of his own conscience,” Thomas said.

Reagan Cool, a senior who writes columns on faith and religion for the campus newspaper, the Collegian, said the speech oriented the dedication into a properly faithful posture.

“He really spoke with  the gravity that recognized the solemnity and transcendence of the event,” Cool said.

Senior Weston Bordman said Thomas clearly outlined the purpose of a chapel at a place like Hillsdale.

“He mentioned along with Arnn that the chapel is the reflection of the completion of a good, well-rounded, liberal education, where spiritual life is necessary to education because all we do is grounded in eternity,” Bordman said. “Because he is a man of faith in a prominent position, it shows that those who desire to be great find their greatness in the Lord.”

Thomas said his faith sustained him through his heated confirmation hearing in 1991, when Anita Hill accused him of sexual harassment during Senate testimony.

“God used this renewed faith to sustain me and my wife through my confirmation hearings, and we continue to rely daily on the grace he gives us,” Thomas said. “But there is nothing unique about this in our lives. For many people, chapels and churches have served as beacons of hope, physical reminders of the need for God and his grace.”

When Arnn addressed the crowd gathered in the chapel, he explained the selection of the building’s classical style, which he said is fitting for Hillsdale.

“Classical style means more than proportion. It means it’s right,” Arnn said. Whatever it is that takes to make it right, it has to be like that. It’s a classical building, it’s like what the Greeks did. It’s a blessing to all of us. And we study that here, of course.”

Thomas has visited Hillsdale before, most recently to give the 2016 commencement address.

“Chapels are particularly important in providing a place for the burdened, the broken-hearted and the despairing,” Thomas said. “When life is difficult and seems pointless, we need a safe haven where we can escape from the storm and find solace. Chapels provide that setting.”