Upper 60s for rest of work week to fall to 50s on Saturday, according to National Weather Service

Detroit — Mild, fall-like weather is in Metro Detroit's forecast for the next couple of days, but rain is expected to kick off the weekend, according to the National Weather Service.

"It's going to be pretty quiet here mid-week into Thursday," said Andrew Arnold, a meteorologist with the weather service's office in White Lake Township. "You're going to see highs generally in the upper 60s today and tomorrow with lows in the low 50s." 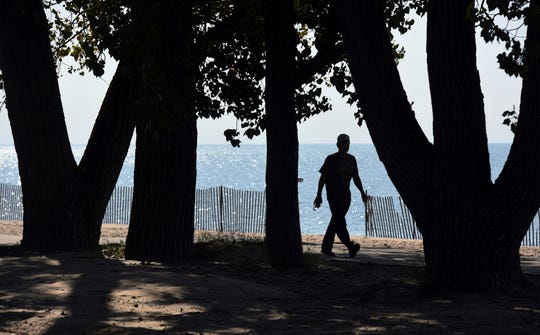 Detroit's higher temperatures through Friday will be warmer than normal: 69 degrees Wednesday, 62 degrees on Thursday and 70 degrees on Friday, the agency forecasts. The average monthly temperature in Detroit for October is 61.6 degrees.

Low temperatures in Detroit will drop from the 50s into the 40s by Friday and stay there through at least Monday. The average monthly low for October in Detroit is 43.3 degrees.

Arnold said there could be some patchy fog in some areas Thursday morning.

In addition, showers are likely to begin Friday night and hang around until Saturday morning, according to the forecast.

"A cold front is going to swing through here and that's going to bring us our next chance for rain and a little bit of a cool down Friday night," Arnold said. "On Saturday, showers are likely in the morning and it will cool down quite a bit with highs in the mid-50s. It'll be a stark drop."

As of Tuesday, Detroit has received about 1.07 inches of rainfall for the month. October's average precipitation is about 2.5 inches, according to weather service data.