A Mich. restaurateur and Kurdish immigrant who has faced deportation to Turkey is publicly criticizing Trump’s decision to pull out of Syria

Harbert, Mich. – A Michigan restaurateur and Kurdish immigrant who has faced deportation to Turkey for more than a decade is publicly criticizing President Donald Trump’s decision to pull about 1,000 U.S. soldiers out of Kurdish-controlled northeastern Syria.

Ibrahim Parlak fled southern Turkey decades ago and sought asylum in the United States. He established his restaurant in Harbert, but for the past 15 years has been in the public eye because of his efforts to avoid deportation to the place he fled in fear of his life. Still, he’s not shying away from the spotlight. 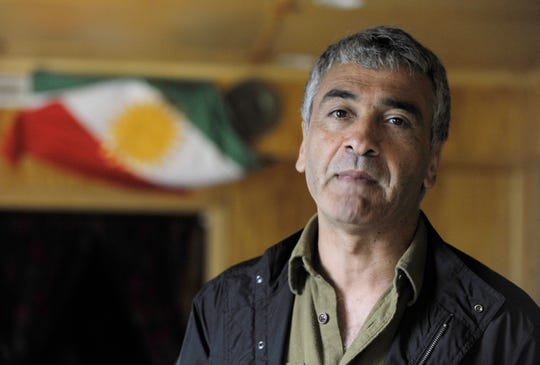 Ibrahim Parlak, A Michigan restaurateur and Kurdish immigrant who has faced deportation to Turkey for more than a decade, has hosted a vigil at his restaurant, joined a protest near the Turkish consulate in Chicago and appeared on multiple news outlets decrying Trump’s pull out from Syria. (Photo: The Detroit News, File)

“The one thing we can do is raise our voice,” Parlak told the South Bend Tribune this week at Café Gulistan, the restaurant he’s owned for 25 years.

Parlak has hosted a vigil at his restaurant, joined a protest near the Turkish consulate in Chicago and appeared on multiple news outlets decrying Trump’s move. He said Turkey and Syria feel threatened by the Kurds’ support for gender equality, religious freedom and the fair treatment of minorities.

“The Kurds, they created democratic system, one of the most democratic systems that you can have,” Parlak said. “Dictator like (Turkish President Recep Tayyip) Erdogan, they don’t want to set example in Middle East.”

Trump has defended his decision as fulfilling a campaign promise to withdraw from the “endless war” in the Middle East. The scaling back of U.S. troops cleared the way for a massive Turkish assault on U.S.-allied Kurdish fighters working to prevent the spread of Islamic State militants and opened the door for Russia to gain a stronger foothold in the region.

Republican and Democratic U.S. lawmakers have denounced the withdrawal as deserting American allies to hostile Turkish and Syrian forces.

In 1992, Parlak was granted asylum in the U.S. after being convicted in Turkey of supporting the Kurdish separatist movement. Immigration officials began efforts to deport him in 2004 after Homeland Security deemed him a threat in the wake of the Sept. 11, 2001, terror attacks.

Last year, a court granted his application for a deferral of removal under the Convention Against Torture , an international law protecting refugees from being returned under threat of torture or death. The federal government has appealed the ruling.

As he awaits a decision, Parlak said it’s important that he continues to speak out against the betrayal of an ally and an ideal.

“I’m not going anywhere,” Parlak said. “This has become my country, my home.”