Boy, 5, found dead in pond after disappearing on Christmas

The body of a 5-year-old boy was discovered in a rural pond Thursday, a day after he was reported missing while playing outdoors on Christmas

Boy, 5, found dead in pond after disappearing on Christmas

Six Lakes — The body of a 5-year-old boy was discovered in a rural pond Thursday, a day after he was reported missing while playing outdoors on Christmas, authorities said.

State and local officers, as well as a swarm of volunteers, had been searching for Beau Belson, who was autistic. He was last seen playing with others Wednesday afternoon in the Six Lakes area, 56 miles northeast of Grand Rapids. 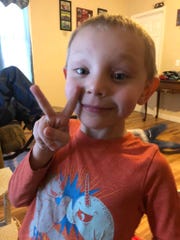 “Unfortunately, he was found in a pond, and he’s no longer with us,” state police First Lt. Kevin Sweeney told an anxious crowd of people. “Our thoughts and prayers go out to the family.”

The pond was near the home of Beau’s grandmother in Montcalm County. The manner of death wasn’t considered suspicious. The boy was wearing a jacket, boots and dinosaur pajamas when he was last seen.

Authorities earlier had expressed hope that mild daytime weather might work in Beau’s favor. The community response was extraordinary: Hundreds of people on Christmas turned out to look for the boy or offer any assistance.

“Any person, regardless of age, you don’t want them being alone in the wilderness for several hours at a time, especially in the 30-degree weather range.”