Lansing —The Michigan Supreme Court on Friday denied Gov. Gretchen Whitmer’s request to remove a lower court’s block on her flavored vaping ban and denied her request that the high court consider the case before the Court of Appeals. 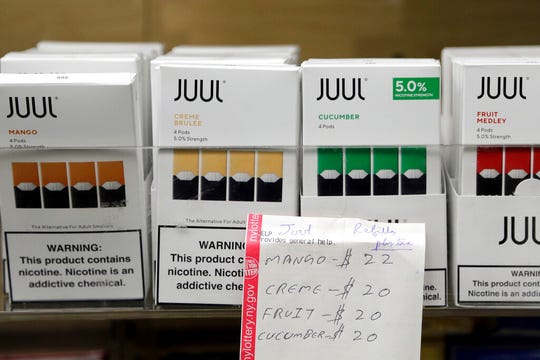 In this Thursday, Dec. 20, 2018 file photo, Juul products are displayed at a smoke shop in New York. On Thursday, Oct. 17, 2019, the company announced it will voluntarily stop selling its fruit and dessert-flavored vaping pods. (Photo: Seth Wenig, AP)

The 6-1 decision is another obstacle in the path of the state’s first-in-the-nation ban on flavored vaping products implemented through emergency rules in September.

Two vape shops filed a lawsuit to stop the ban and were granted an injunction Oct. 15 by the Court of Claims, halting the implementation of the rules. The injunction was upheld Dec. 9 by the Court of Appeals, which continues to review the case.

A majority on the Supreme Court denied Whitmer’s motion because it was “not persuaded that the question should be reviewed by this court before consideration by the Court of Appeals.”

The Supreme Court rarely intervenes before the Appeals Court has ruled on a case.

"The state’s chief medical executive has declared a public health emergency to fight skyrocketing levels of youth vaping, and today’s ruling will make it harder to protect Michigan kids from the harmful effects of nicotine," Pohl said Friday.

In a dissent Friday, Justice Stephen Markman argued that an expedited final resolution of the dispute through a bypass of the Court of Appeals was warranted given the weight of an injunction that pitted the judicial branch against the executive, potentially disrupting the separation of powers.

“Because the decision here of the Court of Claims had the effect of entirely halting the implementation of rules enacted by the executive branch, it warrants, in my judgment, the most expeditious, and the most final, review by the highest judicial authority of this state,” said Markman, a Republican nominee.

The appeals process also poses logistical challenges to the ban, Markman said. The emergency rules only last into April, but “the parties’ briefs are not due in the Court of Appeals until Feb. 3," he said.

“…The rules may well expire before they have ever been enforced,” amounting to “government by injunction,” Markman said.

The Whitmer administration had begun implementing the flavored rules in early October to combat an uptick in youth e-cigarette usage. Michigan was the first to announce such an initiative. Several other states and President Donald Trump announced similar initiatives soon afterward.

Vaping advocates have argued Whitmer’s emergency ban will harm people using e-cigarettes to quit tobacco cigarettes and is a premature response to youth usage since the Legislature passed a law earlier this year making it illegal for children to use vaping products.

Court of Claims Judge Cynthia Stephens ruled in October that the state should halt its ban because the vape shop owners suing to stop the rules had a high likelihood of success. Stephens said the department waited too long to issue the emergency rules, undermining the determination that an emergency existed.

Whitmer and Nessel have said the decision from Stephens set a dangerous precedent regarding the state’s rule-making authority in times of emergency, especially in light of delays in past state public health emergencies such as the Flint Water Crisis.

“After seeing how the Flint water crisis was mishandled, it’s more important than ever that we listen to our public health officials when they make recommendations to protect our citizens,” Whitmer said in October.