After clinging to each other, a wave 'took her from his grip'

Eliza Jane Trainer, 16, of Flushing was swept into Lake Michigan Wednesday from a pier at Holland State Park

After clinging to each other, a wave 'took her from his grip'

After a large wave knocked Eliza Trainer and a friend off a state pier, the two clung to each other in the dark, turbulent waters of Lake Michigan for several minutes as they attempted to wade toward safety.

Her friend climbed onto a rock while still managing to hold her hand until a wave ripped them apart. She disappeared from his sight.

The account of the 16-year-old Flushing High School junior's last known moments on New Year's Day were detailed by authorities as well as on a GoFundMe page established to cover the cost of her burial as law enforcement combs land and water near the Holland State Park pier to find her body.

Trainer and the 18-year-old were swept off the park's pier and into the 36-degree water by waves at 11:30 p.m. Wednesday. The tragedy unfolded, the crowdfunding site notes, after the two decided to go for a stroll along the coast.

The pair "clung to each other for about 5 minutes, trying to make their way to the rocks," it reads.

"Her friend was able to get on a rock while still holding her hand, but as he was trying to pull her up, another wave came and took her from his grip," the page reads. "He tried to find her, but she was quickly swept away." 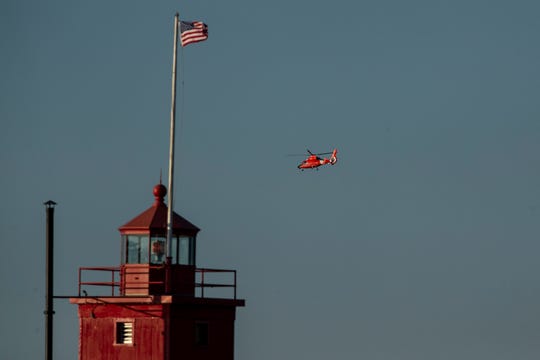 A U.S. Coast Guard helicopter helps in the search for Eliza Trainer on Thursday. Authorities say the teen is missing and presumed drowned after apparently being swept into the water by a large wave around 11:30 p.m. Wednesday (Photo: Cory Morse, AP)

The teens were at the pier to see Lake Michigan that day because they had "never seen the lake before," according to investigators.

The Ottawa County Sheriff's Office said Friday its dive team and marine patrol deployed sonar equipment and searched by boat in hopes of locating the teen, described on the GoFundMe page as "a kind and loving person" being raised by her father after her mother died of cancer five years ago.

Capt. Jake Sparks, in a Friday news release, said conditions on Lake Michigan "remain dangerous with high wind and waves." Even so, the office was searching the area by boat.

Trainer loved playing soccer, hiking and the outdoors. She aspired to become a diesel mechanic after graduation, according to the fundraising page. By Friday evening, more than $7,000 had been raised.

She was a kind person, the page says, and "would do anything to help those in need."

"Today, this family is in dire need of financial assistance to give Eliza Jane the proper memorial that she so lovingly deserves," the page reads. "Any help would be greatly appreciated to comfort those mourning the tragic and unexpected loss of Eliza."

As the new year approached, Trainer took to Instagram, writing "here's to another year of chances." As of Friday afternoon, the post had more than 100 comments, including prayers for Trainer's family and wishes for her to "rest easy."

On Thursday morning, Sgt. Jay Douglas told WOOD-TV in Grand Rapids that the teen was "presumed drowned" and the search had turned from a rescue into a recovery mission. Crews were unable to get boats or divers into the water Thursday due to weather conditions. 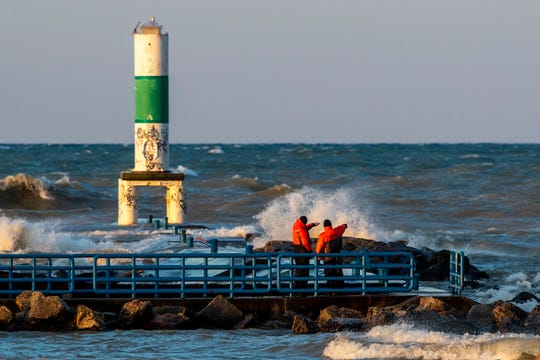 Firefighters, police and the U.S. Coast Guard have aided in searches along the shoreline for Trainer. (Photo: Cory Morse, AP)

But on Friday, marine units of the Michigan State Police assisted during the early hours of the search.

Trainer's friend was treated at Holland Hospital and released to his family on Thursday. Sparks said the teen sustained some injuries after falling into the cold water.

Authorities on Thursday had listed Trainer's hometown as Flint. Flushing is just northwest of Flint.

Timothy Stein, superintendent of Flushing Community Schools, informed staff and families of the circumstances on the district’s Facebook page. Grief counselors will be in the school’s north cafeteria Monday to assist students and staff, he said.

“Our thoughts and prayers are with the families of Eliza and the young man involved. Eliza will be dearly missed by her fellow students and the staff at Flushing High School,” Stein wrote.

“We encourage all individuals to reach out to our high school administration or counseling staff if they are struggling, as we all come to grips with this tragic loss.”