Michigan will sue 17 companies for chemical contaminants known as PFAS; the firms are alleged to have contaminated the state’s environment

Lansing — The state of Michigan will sue 17 individual companies for chemical contaminants known as PFAS with which the companies are alleged to have contaminated Michigan’s environment.

Among those companies named in the suit are chemical companies DuPont and Minnesota-based 3M. 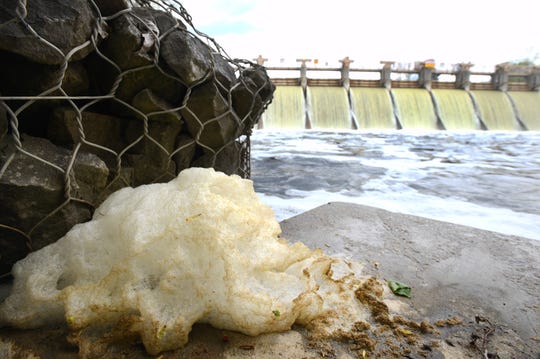 Foam along the Huron River can be seen downstream from the Barton Dam in the Barton Nature Area in Ann Arbor. (Photo: Daniel Mears, The Detroit News)

"In every decade since the 1950s, these companies saw increasing evidence of the harm PFAS could bring and yet they did nothing to stop it. Nothing," Nessel said.

DuPont had not yet received Nessel's complaint, but was "extremely disappointed they have taken this action we believe is without merit," said a spokesman for DuPont, a company formed in 2017 by the merger of Midland-based Dow Chemical and then Delaware-based DuPont.

The company's use of PFAS, for which it is trying to find an alternative, is a "small fraction" of the chemical contaminant's global use, DuPont spokesman Daniel Turner said in a statement.

"While fulfilling our remediation responsibilities continue to be a priority for DuPont, we are, and have always been, committed to upholding the highest standards for the well-being of our employees, our customers and the communities in which we operate, and we will vigorously defend our record of safety, health and environmental stewardship," Turner said.

"To that end, we have placed thousands of documents in the public domain, including more than 150 published studies conducted by 3M and other researchers on potential environmental and health effects of PFAS," she said. "3M did not and will not distort the science."

Evidence obtained during the Minnesota Attorney General Office’s recent pursuit of legal claims against Minnesota-based 3M reveals concerns were raised repeatedly about PFAS both inside and outside 3M with little to no redress.

In 2018, 3M agreed to pay the state of Minnesota $850 million to settle a lawsuit that alleged the company contaminated groundwater and damaged natural resources while disposing of chemicals.

The cost of assessing the depth and breadth of the issue in Michigan so far has cost the state roughly $25 million a year, Nessel said. The cost is expected to increase significantly as the state attempts to remediate the contaminant and restore sites, escalating potential damages to hundreds of millions of dollars.

"Companies that are responsible for these contaminants must be held accountable," Whitmer said Tuesday. "Polluters must pay."

The complaint alleges the companies knew or should have known that the "forever chemicals" persisted in the environment, became concentrated inside plants and animals, were potential or confirmed carcinogens and that continued production of PFAS would increase levels in the environment and people's bodies.

Several companies listed in the suit were at one time or still are associated with or part of 3M or DuPont.

"These companies went to great lengths to promote the lie that PFAS and PFAS-containing products were safe and appropriate for widespread usage," Nessel said. "As a result of their decades-long scheme to conceal PFAS dangers, the ubiquitous contamination caused by these chemicals has only recently come to light.”

While Michigan in December was on the "tail end" of states who filed lawsuits against pharmaceutical companies that contributed to the opioid epidemic, the state is third or fourth in the nation to file in regards to PFAS contamination, Nessel said.

The early filing could give Michigan a "first in" advantage on potential settlements or judgments against the chemical companies, she said.

The lawsuit was filed in Washtenaw County in part because of the impact PFAS contaminants have had on the Huron River watershed, including warnings about foam gathering on the waterways and advisories against eating fish caught in the river, Nessel said.

Nessel has hired three "nationally known" law firms with expertise in contaminant litigation to assist the department in assembling the case. They are from Chicago, Cincinnati and Washington, D.C.

The announcement comes a little more than a month after Michigan reached a $69.5 million deal with Wolverine Worldwide over PFAS contamination in the Kent County area. The settlement would extend water service to more than 1,000 properties in the area.

Republican former Gov. Rick Snyder asked then-Attorney General Bill Schuette in July 2018 to prosecute 3M over its products such as Scotchgard that leached contaminants into the environment that have been identified at current or former military installations.

“Because of the scale and the scope of this problem and the associated expenses, it is necessary to pursue legal action against those who continued to produce and market these products, even once they were identified as the cause of this environmental contaminant," Snyder said at the time.

Schuette, a fellow Republican who was term-limited and lost to Whitmer in the 2018 gubernatorial election, reviewed the request but didn't initiate any legal proceedings against 3M before leaving office at the end of 2018.

Worry about PFAS sparked in communities north of Grand Rapids in the summer of 2017, when Wolverine revealed that chemicals from making popular products like Merrell, Stride Rite, Saucony and Hush Puppies shoes had leached into wells. The company began to cooperate with state environmental officials to locate dump sites.