State police officials say 37 of the 203 machines pulled out of commission have been recalibrated, with the remainder back online within 30 days

An audit identified the first evidence of potential criminal wrongdoing by the third party company hired to perform maintenance on the device on Jan. 2, but problems with the company's technicians date back to April 2019. Between August and December, seven cases were dismissed because of errors and a lack of compliance with contracted duties.

The agency has calibrated 37 of the 203 machines pulled out of commission and hopes to have the remainder of the instruments back online within 30 days, Michigan State Police Director Col. Joseph Gasper told lawmakers Thursday.

One of the latest problematic breath alcohol testing devices is in Detroit, officials said.

It is unclear when police will complete a review of the blood alcohol breath tests taken by the machines from September 2018 onward, Gasper told the Senate Judiciary and Public Safety Committee. Nor do officials know yet how many breath tests they will have to review from that time period.

"Part of our frustration is the inability to provide clear and precise information about how many people are going to be affected by this," Gasper said. "We are actively going through the data. …The moment we discover discrepancies or irregularities, there will be notifications made as soon as possible.”

The issues with the breath test machines were first noted on Jan. 2 when an audit found irregularities in a maintenance report from a DataMaster DMT instrument at the Alpena County Sheriff’s Department, he said.

Michigan State Police immediately opened a forgery investigation into the incident and pulled all maintenance responsibilities for the machines in house.

On Jan. 13, the agency noted other irregularities in instruments at the Beverly Hills, Pittsfield Township and Tecumseh police departments. The agency pulled all of the state’s 203 DataMaster devices and told police statewide to rely solely on blood draws in the interim.

The DataMaster devices are not roadside preliminary breath tests, but larger machines in some police departments where suspects can provide an official breath sample, usually in place of a blood draw or urine sample. 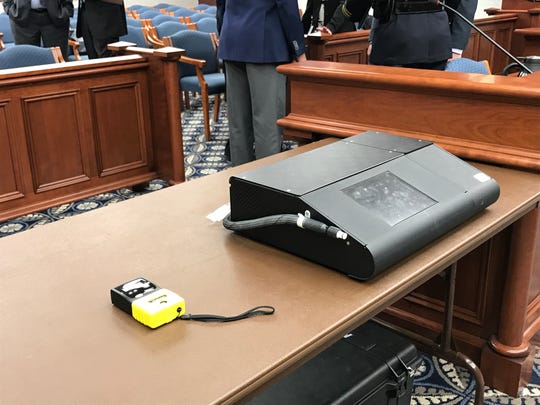 The state hired Intoximeters, Inc. in September 2018 to provide maintenance and certification for the instruments, which have to be calibrated every 120 days to ensure they are still making accurate measurements. The $1.26 million contract with the company is supposed to last three years.

Police believe at least two of the three technicians performing the work for Intoximeters were forging the paperwork verifying the 120-day calibrations, Gasper said. In particular, there were irregularities with dates, times and the alignment of data on the calibration report.

It appears, Gasper said, the technicians "took some of the tickets, they cut them and then they taped them back together in a format that closely resembled" the report or ticket Michigan State Police would expect to see.

Gasper said it appeared to be carelessness or laziness by the technicians and the department is determining whether it can recoup the costs of its contract with Intoximeters.

“We are committed to conducting a thorough and complete investigation into this matter and if we can prove criminal action, we will pursue criminal charges against those responsible,” he said.

While the Jan. 2 audit results marked the first instance of potential criminal conduct, it was not the first time State Police had issues with Intoximeters' technicians.

In August, Intoximeters submitted a corrective action plan to the agency after it was found they had not met contractual requirements. At that time, technicians were found to have failed to complete timely 120-day certifications in 60 instances, had shared instrument passwords with jail staff and had recorded incorrect data during instrument checks.

In addition, technician errors led to the dismissal of a drunken driving case in Montcalm County in August and in six cases in Wayne County in October, prompting the state police to begin creating a unit to oversee breath alcohol testing with in-house technicians.

The plan was accelerated In January, when Michigan State Police found the first alleged instance of a test being fabricated.

The lack of accurate certification records for the machines doesn’t mean the results on individual blood alcohol content tests are wrong, but they could be inadmissible in court because they were produced outside the time frame in which the instrument was supposed to be calibrated, Gasper said.

As police identify cases potentially affected by the issue, they are notifying prosecutors who will notify defendants and make a decision on the future of the case.

An inadmissible breath test, Gasper said, does not immediately mean the dismissal of a case.

“In many cases there is other evidence of intoxication and impairment, such as observed driving, sobriety tests and witness observations that provide indications of drunk driving,” he said.

East Lansing defense attorney Michael J. Nichols, who testified beside Gasper on Thursday, said the instrument issue and prior problems at the state police forensic lab have pushed the state to the “brink of a public confidence crisis” in blood alcohol testing.

Nichols, a member of the National College for DUI Defense, has advocated for the removal of forensic testing from the state police department into another agency such as the Department of Health and Human Services to ensure there is no conflict of interest when state police scientists are conducting testing.

Separately, Sens. Tom Barrett, R-Charlotte, and Stephanie Chang, D-Detroit, have introduced legislation that would create a forensic science commission to oversee the state’s crime labs, legislation that the department has opposed.