The shipping industry and Michigan businesses are urging Congress to increase the number of icebreaking ships in the Great Lakes as water levels have surged to record highs in most of the lakes and connecting waterways.

In the past few winters, higher water levels have created greater ice hazards for ships, hindering the movement of goods and last year costing an estimated 5,421 jobs and $1 billion to the U.S. economy, according to an industry-backed study. It also resulted in an estimated $172,000 in lost state and federal tax revenue. 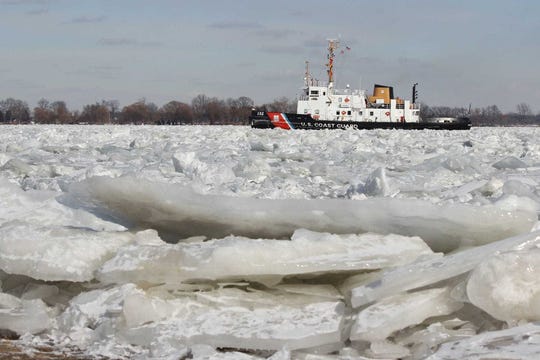 The Coast Guard cutter Bristol Bay breaks a path for an approaching vessel in Marine City in this file photo. When the lakes freeze over, rising water levels create a growing problem to keep the shipping channels clear of ice until April. (Photo: Rodney Burdick)

The losses resulted from steel that wasn't made and power that wasn't generated by coal and iron ore that U.S.-flag ships couldn't move, according to a report by Martin Associates that used industry-provided numbers on lost hours and tonnage. The cargo moved on Great Lakes waterways include iron ore, coal, limestone, grain, salt, fuel and oil.

Freezing temperatures and winter storms in higher water create more opportunities for the formation of ice floes — large sheets of ice that can damage hulls — and ice jams, which clog waterways and cause flooding. They are creating a growing problem to keep the shipping channels and harbors open from December to as late as April, said Jim Weakley, president of the Lake Carriers Association, which represents shipping companies operating on the lakes. 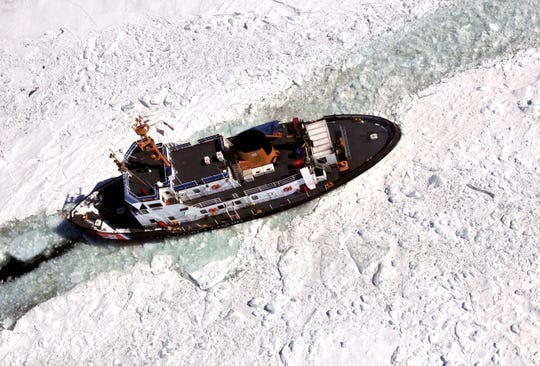 Sen. Gary Peters, D-Bloomfield Township, has been working for five years to get funding for a new heavy ice cutter, but the Coast Guard has not created a plan to do so. He recently got $2 million in the latest budget agreement to jump-start the process.

“The Great Lakes are in desperate need of a new heavy icebreaker because Michigan businesses must be able to rely on shipping to move their goods and materials year-round," Peters said in a statement. "Increasing our icebreaking capacity will not only help support maritime commerce, but will also protect our Northern border.”

Video: Last shipping freighter of the season on the Great Lakes comes to port

The U.S. Coast Guard operates nine icebreaking ships on the Great Lakes — two to three fewer than it had in the 1990s. Canada has two. There are eight U.S. ice breakers currently because one cutter is in the Coast Guard yard in Maryland for repairs to extend its service life.

Some business groups said Congress and the Trump administration urgently need to address the issue. Shipping by water is a critical part of the supply chain for businesses for all sizes, said Brian Calley, president ofthe Small Business Association of Michigan.

"The situation is more critical than ever this year because of historically high water levels," said Calley, the former lieutenant governor of Michigan. "There is an aging fleet of icebreakers that have dwindled in numbers over the past few decades. That presents an unnecessary risk to moving commerce and homes/businesses along the coastlines.”

The U.S. Coast Guard would love more resources to add to the existing nine icebreakers, a spokesman said. But the Coast Guard is on top of the ice problem 95% of the time, he said.

"If we have a terribly harsh winter, there's probably going to be more challenges for the Coast Guard as well as the industry to move their ships through the ice, but as a government agency, we can't resource for the worst-case winter on a regular basis," said Lorne Thomas, the external affairs officer for the Coast Guard based in Cleveland. 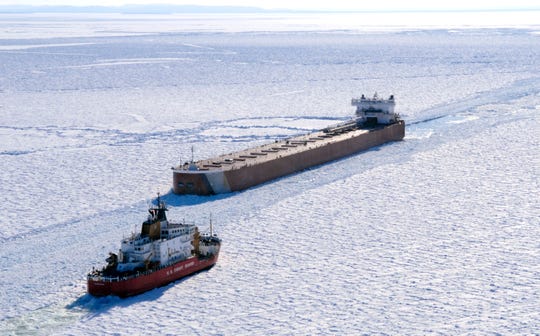 More money, but no cutter

The budget agreement signed in late December provides $4 million for the Coast Guard — money obtained by Peters. About $2 million is targeted at "program support' so the guard can run and maintain icebreakers longer in bad weather, while another $2 million is supposed to create a major acquisition office that might result in another icebreaker for the Great Lakes.

Buying a new cutter could range from $175 million to $300 million, depending on what kind of capabilities are designed for the vessel, according to a rough estimate by the Congressional Research Service. Half of the $4 million is targeted at initiating Coast Guard planning for an icebreaker at least as large as the USCGC Mackinaw — a 240-foot heavy cutter, according to congressional staff.

Peters and U.S. Sen. Tammy Baldwin, D-Wisconsin, have gotten authority for a new Coast Guard icebreaker at different times during the last five years, but have never received the funding. For national security reasons, the Coast Guard has been seeking money to buy three large polar ice cutters and three medium ones, which wouldn't operate in the Great Lakes but in the Arctic and Antarctica.

But this winter is expected to be more moderate.

The National Oceanic and Atmospheric Administration forecasts 47% of the five Great Lakes will be frozen by late February, below the 56% long-term average.

Over 5% of the five Great Lakes were covered with ice on Jan. 15, according to the federal Great Lakes research lab in Ann Arbor.

The number of icebreaking cutters has fluctuated during the past 30 years.

There were 11 to 12 cutters in the Great Lakes during the 1990s, depending on the year, the Coast Guard confirmed. Three of them technically could break ice, but they instead were used to aid navigation, according to the Coast Guard.

In 2000, the number fell to eight cutters, officials said, and has since risen. 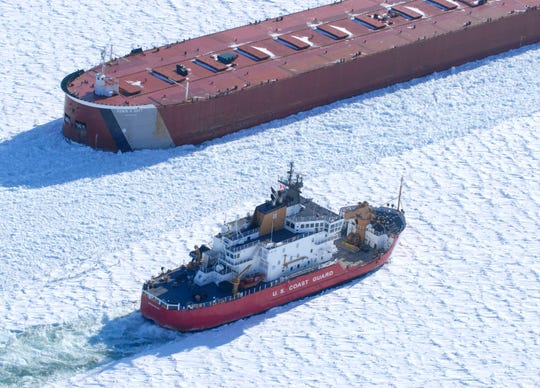 Higher water levels recently in the Great Lakes create greater ice hazards for ships during the winter, while the aging fleet of icebreakers has dwindled in numbers. (Photo: John L. Russell, Associated Press)

The lack of icebreaking cutters by Coast Guard vessels during the 2019 winter resulted in a 4-million-ton loss of iron ore and 900,0000-ton loss of coal because of ice that didn't get moved, according to the analysis by Pennsylvania-based economic firmMartin Associates, which was hired by the carriers' association.

"The nation's economy depends on reliable and predictable icebreaking on the Great Lakes," Weakley said. "It's not just about the billions dollars lost in economic activity, it's about the safety of the waterway, not only for our sailors but also for the homeowners in this high-water system."

It was a reference to homeowners along the lakes and connecting waters who can experience flooding and impassable harbors because of the ice.

The Coast Guard is "resourced adequately" on the Great Lakes to "meet our mission needs during our regular winter," Thomas said. "If it looks like we're going to need some additional resources, we have the ability of the Canadian Coast Guard to come in and back us up."

Experts said more winter storms and elevated water could cause more ice floes, jams and flooding in areas like the St. Clair River or near the Luna Pier region of Lake Erie in southern Michigan.

There is a high probability of problems stemming from more rain and high winds, said officials from the U.S. Army Corps of Engineers, which track lake levels and forecast them out at least six months.

"Icebreaking is essential to minimizing damaging impacts to shoreline communities from ice."

The Coast Guard usually can deal with clearing icy conditions and regular requests for assistance, said Paul Rhynard, a spokesman for the Coast Guard office based in Cleveland, which is the home base for the Great Lakes vessels.

But Rhynard admitted the Coast Guard "absolutely" has aging ice cutters "and we have to factor that into what we're doing."