Ann Arbor — The University of Michigan is dealing with more allegations of sexual misconduct among its ranks.

On Wednesday, President Mark Schlissel announced he had placed Martin Philbert, the provost and executive vice president for academic affairs, on administrative leave Tuesday amid an investigation stemming from allegations made against the university's No. 2 official last week. 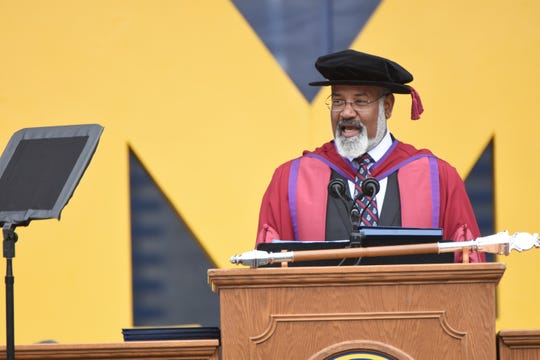 Martin Philbert, during commencement exercises at the University of Michigan in Ann Arbor on Saturday, May 4, 2019. (Photo: Max Ortiz, The Detroit News)

In response to several allegations of sexual misconduct, which emerged Thursday and Friday, the university launched an internal investigation, hired an outside law firm, engaged the UM Division of Public Safety and Security, and told Philbert not to come to work.

The university "had not received any allegations from persons identifying themselves as students," it said.

"We take allegations of sexual misconduct very seriously, and our policy is clear: Sexual misconduct will not be tolerated in the University of Michigan community," Schlissel wrote.

UM's president said the investigation was in the early stage, thanked those who came forward with the allegations, and encouraged others to speak out against anyone believed to have violated the university's sexual misconduct policy.

"We know that reporting requires courage," Schlissel said. "The university has offered support services and will work diligently to assist those who report in every way possible."

Schlissel said the Office for Institutional Equity, which had been reporting to the provost, will report to Associate Vice President for Human Resources Richard Holcomb during the investigation.

Philbert, the university's chief academic and budget official, did not immediately respond Wednesday to phone and email messages seeking comment.

He is not the first UM staff member to face sexual misconduct allegations.

UM began termination proceedings last summer against another music professor, David Daniels, after a grand jury in Texas indicted the countertenor and his husband, William Scott Walters, in the sexual assault of an incapacitated man in 2010.

But Philbert — a professor of toxicology in the UM School of Public Health and a former dean of the school who was appointed provost in 2017 — is the university's highest-ranking official to face such an investigation.

His salary is $570,340 a year, which he will continue to receive during the investigation, UM spokeswoman Kim Broekhuizen said.

In comments posted Wednesday on Twitter, UM Regent Jordan Acker called it "a sad day for the University."

"I am angry and deeply empathetic to the survivors, and am committed to ensure that it never occurs on our campus again," Acker said. "Our community healing starts with first understanding the alleged activities and exactly what happened.

"For me, our investigation must be transparent, with sensitivity and understanding for the survivors and their needs, and work to make sure that something like this never happens on our campus again."

Others, such as U.S. Rep. Debbie Dingell, D-Dearborn, also praised the individuals who had come forward and the university's response.

"The University of Michigan is quickly stepping up to investigate these serious allegations," Dingell posted on Twitter. "Everyone deserves due process and a thorough investigation. It is still difficult for survivors to come forward in situations like these, and we need recognize their bravery and courage."

Students who learned of the investigation and Philbert's leave said they were concerned but pleased UM was looking into the allegations.

"I am glad the school is investigating this," said Christiana Cromer, a UM senior from San Diego who is majoring in organizational studies.

"Things like this happen all the time, especially on university campuses," she said.

"It's good that all measures are being taken to figure out what's going on," said Mehta. "I am also glad it was publicized and something was sent out. It might brings forward others."