Pair of birds gobble up attention, give authorities the slip

Traverse City — The traffic light is green, but traffic on busy South Airport Road has ground to a halt — because the turkeys are crossing the road again.

A pair of turkeys began to appear daily last summer along the busy cross-town route. The birds have become a constant sight, traveling along several miles of the four-lane highway on any day. They also stop traffic by crossing the busy highway.

The duo have been nicknamed Hammer and Nails by a local lumber yard where they were often seen. The names stuck, and the birds became more popular through social media. 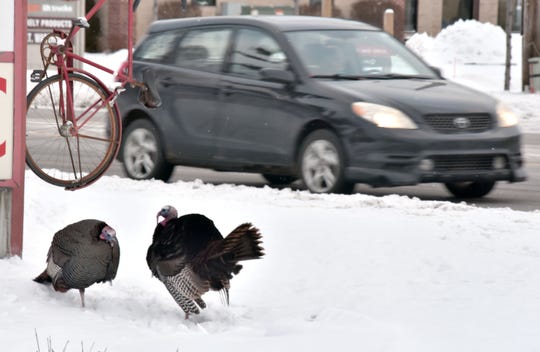 A pair of popular turkeys - nicknamed Hammer and Nails by a local lumber company, stand near Garfield Road in Traverse City on Wednesday, Feb. 19, 2020. The birds are frequently seen crossing busy highways and streets south of downtown Traverse City. They also have a Facebook page. (Photo: John L. Russell, Special to The Detroit News)

The turkeys have also become a concern for traffic safety.

“The birds will cross the highway, and sometimes use the crosswalks,” said Leah Hornacek, deputy director of Grand Traverse Central Dispatch, the emergency dispatch center for police, fire and ambulance calls. “People have gotten out of their vehicles to shoo them across the road, and that is a concern.”

“We average four calls a day about the birds,” Hornacek said. “Some days we could reach 30 calls about them walking in the roadway.”

Wildlife biologists from the Michigan Department of Natural Resources tried to capture the birds on Feb.10. Numerous calls to 911 brought five officers out in an attempt to round up the errant birds and move them out of harm’s way.

A pair of popular turkeys - nicknamed Hammer and Nails by a local lumber company, stand near Garfield Road in Traverse City on Wednesday, Feb. 19, 2020. The birds are frequently seen crossing busy highways and streets south of downtown Traverse City. They also have a Facebook page. (Photo: John L. Russell, Special to The Detroit News)

“We’ve gotten numerous calls about the turkeys,” said Steve Griffith, a DNR wildlife biologist out of Traverse City. “Motorists were exiting their vehicles at the busy intersection of South Airport and S. Garfield roads to move the birds from the intersection. We don’t want people or turkeys to get hurt.”

The birds are not considered a danger to fly through traffic.

“Turkey do not fly far, usually only in the evening to roost in trees or to avoid danger," Griffith said. "They are a ground bird. They prefer to walk.”

The pesky poultry also have their fans, who follow the birds on their own Facebook page, Traverse City Turkeys.

“They have become an overnight sensation," Hornacek said.

The turkey have some funny tendencies, such as displaying aggression toward vehicle, she said.

“They seem to dislike red plow trucks, attacking them in traffic," Hornacek said.

Linda Little of Bear Lake often would see the birds on visits to Traverse City and started the Facebook page in January. There are over 5,000 members and climbing. 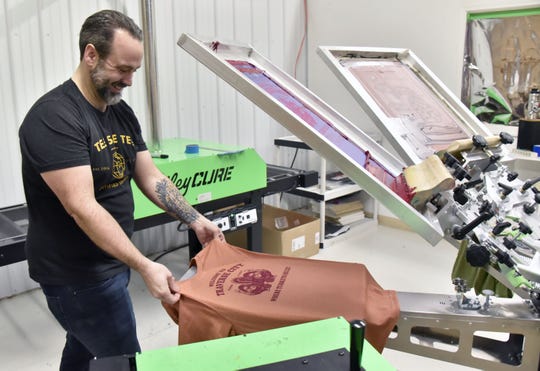 Beau Warren of Tee Cee Tee, a t-shirt company in Traverse City, silk-screens a turkey t-shirt. Two turkeys have been causing traffic problems along a busy local roadway, and the birds have become celebrities through the internet and social media reports. Warren has been selling and shipping the shirts all over the United States since the stories became known. (Photo: John L. Russell, Special to The Detroit News)

“There is so much negativity on social media,” Little said. “These turkey have created a nice diversion. I’m hoping people will smile a little through this site.”

Beau Warren, 42, of Tee Cee Tee’s, a local T-shirt company, is producing colorful shirts honoring the birds. He said he can’t keep the shirts in stock. 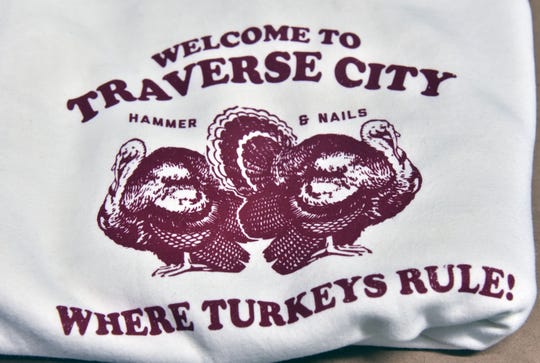 “I’ve sold over 100 shirts in the first offering,” Warren said. "The shirts are going all over the country. It seems anyone with a connection to Traverse City wants a shirt.”

The DNR has decided to not pursue the turkeys again unless they become increasingly dangerous to traffic.

“At this point we have no active plans to relocate the birds,” Griffith said. “This isn’t the first time we’ve had turkey problems in this area. There is a lot of food available from the oak trees. If it gets to be a serious problem, we will try again to capture them. If we moved them outside the county, they would not return."

Drivers around the busy intersection and along S. Garfield are becoming more aware of the birds. The hope is that the birds will not be injured or killed. More and more people sign up on the Facebook page to monitor their location.

“It’s a fun distraction for people,” Hornacek said. “Hopefully everyone will be safe and let the birds do their thing.”

John L. Russell is a photojournalist and writer from Traverse City.