Warren — Art Van Furniture, a Metro Detroit institution and one of the largest furniture retailers in the Midwest, will close all of its company-owned stores and liquidate its inventory after struggling with changing furniture-shopping habits and heavy debt following its acquisition by a private equity firm three years ago.

Founded in 1959 with one store by Art Van Elslander, the Warren-based company expanded significantly in the last seven years to 190 stores in nine states, including Michigan, Illinois, Indiana, Missouri and Ohio. All 3,100 of its employees will lose their jobs and questions loomed Thursday about what will fill the space left by the closed stores. 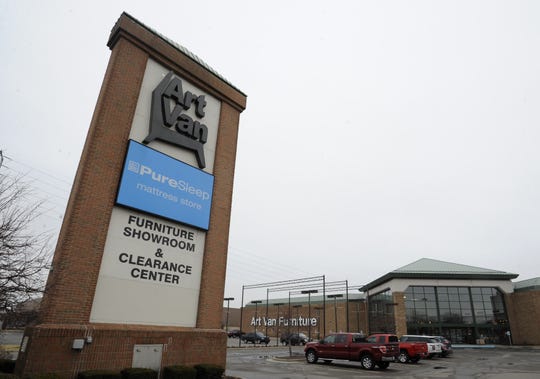 "Despite our best efforts to remain open, the company's brands and operating performance have been hit hard by a challenging retail environment," said Diane Charles, Art Van Furniture spokeswoman, in a statement Thursday.

"We recognize the extraordinary retail, community and philanthropic legacies that Art Van Furniture has built for decades in the community."

After more than 60 years in business, Art Van Furniture on Thursday announced plans to close all of its stores and go out of business, citing a "challenging retail environment." Todd McInturf, The Detroit News
Fullscreen

Art Van Elsander, right, with his son, Gary, pictured in 1986. Van Elslander started the company in 1959 with one story on Gratiot in what is today Eastpointe. Art Van now has 190 stores and 3,100 employees. The Detroit News archives
Fullscreen

As recently as November of 2019, the future appeared to be stable for the retailer. It set off fireworks for its annual holiday party at its flagship location in Warren. Maureen Feighan
Fullscreen

Pictured in 2018, Van Elslander was credited with saving America's Thanksgiving Day Parade in Detroit by writing a  personal check for $200,000 to keep it going in 1990.  Robin Buckson, The Detroit News
Fullscreen 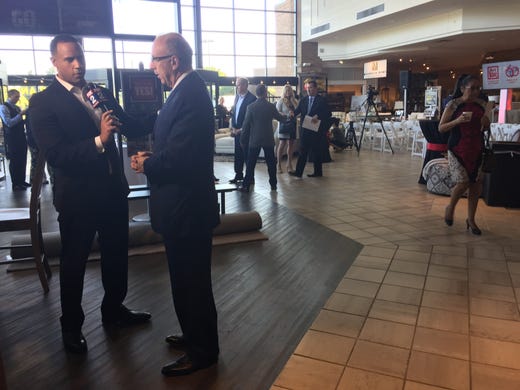 In September of 2019, Gary Fazio, a former mattress executive, came out retirement to take the helm of Art Van. Maureen Feighan
Fullscreen 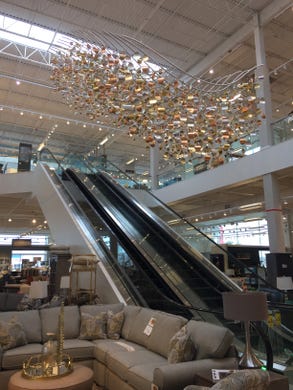 In early 2018, Art Van opened a standalone store with a sparkly display over the escalator in Canton. Canton Township's supervisor on Thursday said he's already met with the township's economic development leaders to start working on finding a new tenant. Maureen Feighan
Fullscreen

Art Van was the largest furniture and mattress retailer in the Midwest. Robin Buckson, The Detroit News
Fullscreen 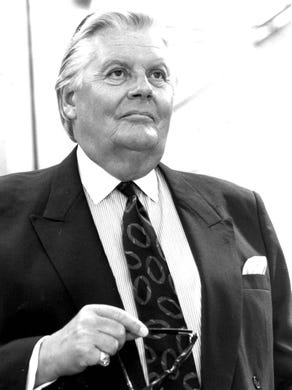 "It's no longer fashionable to pay retail price for anything," said Art Van Elslander, seen here in 1992. By 1985, Art Van had introduced Clearance Centers attached to many of the stores offering overstocked merchandise at 40 to 70 percent off retail. The Detroit News archives
Fullscreen 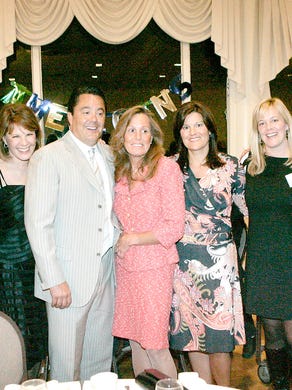 Art Van Elslander poses with supermodel Cindy Crawford, right, whose furniture line Art Van carries, at his 50th anniversary in business fundraising gala for brain research at his showroom in Warren in 2009. The Detroit News
Fullscreen

The chairman and founder relaxes in the Art Van Gallery Showroom headquarters in Warren in 2009. John M. Galloway, Special to The Detroit News
Fullscreen

In 2009, the Van Elslander family honors their patriarch, center, at a celebration of his 50 years in business with a fundraising gala for brain research at his showroom in Warren. The Detroit News
Fullscreen

HGTV's Hilary Farr was one of several celebrities who were brand ambassadors for Art Van. David Guralnick, Detroit News
Fullscreen 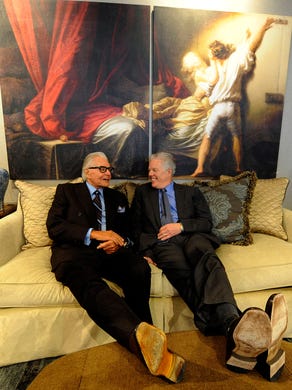 Van Elslander relaxes with son Gary Van Elslander in 2013 on one of the sofas at their new Scott Shuptrine Interiors store on Woodward in Royal Oak. Charles V. Tines, The Detroit News
Fullscreen 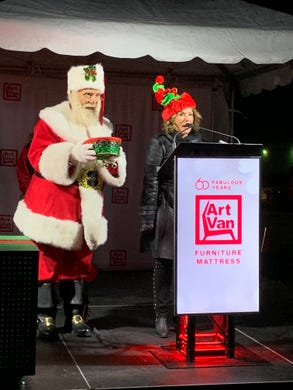 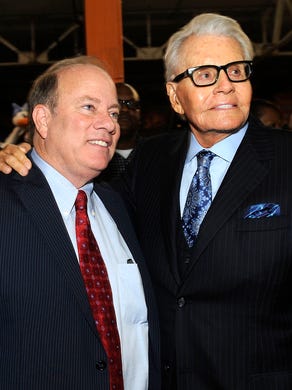 In an interview with The Detroit News in late November 2015, Van Elslander said he’d never retire. “When you’re having fun and really enjoying it, why on Earth would you quit?” Robin Buckson, The Detroit News
Fullscreen

The stores' going out of business sales begin Friday. At 3 p.m. Thursday, Art Van PureSleep — part of an empire renowned in Michigan for its endless cycle of sales — emailed its latest offer, with a long-term purchase plan perhaps no longer valid: "$150 Million Blowout. Save up to $800 plus up to 72 months plus free delivery."

The liquidation announcement shocked Metro Detroit customers, employees and city leaders. It comes just weeks after media outlets reported the retailer was exploring bankruptcy proceedings and a possible sale back to the Van Elslander family.

“I’m heartbroken on a number of levels," said customer Beverly Phillips of Farmington Hills. “My last three mattresses came from there. My daughter’s bedroom furniture came from there. To see a Detroit family institution go to private equity and disappear in three years, it’s awful. My heart goes out to the employees.” 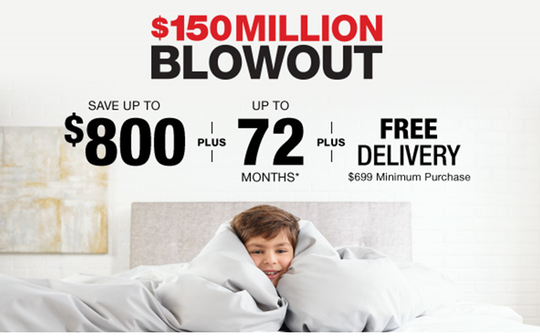 'This did not have to happen'

Boston-based private equity firm Thomas H. Lee Partners bought Art Van for $550 million in 2017, a year before the death of the furniture chain's founder in February 2018.

In a statement from the private equity firm released late Thursday, a spokesperson said "investors in the March 2017 acquisition, including THL, will lose 100% of their principal investment in the company and never received any dividends or returns of capital from their investments."

Warren Mayor Jim Fouts, who got a letter Thursday morning from the private equity firm about its plans to close, said 262 employees were based at the company's headquarters and flagship store on 14 Mile in his city. He said he heard from some high-level employees the firm that bought Art Van was selling off assets from the moment it took over.

"I’m absolutely outraged and angry," said Fouts, who said the closure in Warren will cost the city and local school districts about $2 million in tax revenue. "This did not have to happen. This was a successful company. This was a case where investment greed got the best."

As recently as last fall, the company seemed hopeful about its future. It celebrated its 60th anniversary then with a big party and concert by pop star Andy Grammer at its 14 Mile store. It also hired last fall a new CEO, Gary Fazio, who pledged to take the company to "another level."

Still, the retail landscape has changed significantly since Art Van Elslander started with one store on Gratiot Avenue in what is now Eastpointe. Ikea, which opened a 355,000-square-foot megastore in Canton Township in 2006, draws customers from a radius of 100 miles and more with its fast-furniture-on-the-cheap business model. Online furniture retailers such as Wayfair and Amazon have become major players, competing with traditional brick-and-mortar stores. Ashley HomeStores also expanded into Metro Detroit in 2017; discount retailer Bob's Discount Furniture opened several stores in Metro Detroit last year.

Ron Goldstone, executive vice president of NAI Farbman, a Southfield-based real estate firm, said "to lose a player in the industry that's of such a high quality, and to put that much square footage on the market, is a little bit of a scary moment."

"All of a sudden the ground shakes and the profit margin isn't there anymore," Goldstone said. "So maybe the Gardner Whites or Ashley or other operators in that category might absorb some of the units that come available."

Cities home to soon-vacant big-box storefronts should be creative and flexible in their search for new tenants, said Goldstone: "I don't anticipate the units won't get back-filled, Art Van has some of the best retail locations in every market," he said. 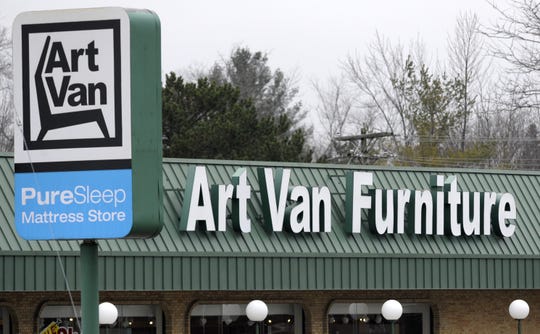 “Art Van is no different than any other brick-and-mortar retailer that has been impacted by the retail apocalypse, and plans for an orderly wind-down should not be surprising to anyone," Calderone said in a statement.

"The private equity playbook, which almost always results in aggressive use of leverage, which increases the risk of failure exponentially, has not worked out for other retailers in the past and didn’t serve Art Van well either. When an investment thesis doesn’t pan out, equity sponsors tend to cut their losses quickly."

"This can't be tolerated," said Fouts. "There should be a national or state law that would prohibit" private equity firms from immediately selling assets.

State Sen. Paul Wojno, D-Warren, said he'd support a review or audit of the Thomas H. Lee Partners acquisition because Art Van appeared to be solvent when it was purchased. He said private equity firms are regulated by the Securities Exchange Commission.

"I think it’s realistic to initiate a constructive dialogue and work with our federal regulators about what, if anything, we can do to make sure this doesn't happen in another city," said Wojno.

Among the casualties of the closing will be the annual Art Van Charity Challenge, which donated more than $10 million to Midwest nonprofits and helped raise another $26 million across the past 11 years.

"We definitely benefited financially," said Cindy Eggleton, founder and CEO of two-time participant Brilliant Detroit. "But we also benefited in getting the word out, and in people coming together for something that matters."

Brilliant Detroit, which focuses on early education, took third place in last year’s challenge, earning a $25,000 prize from the company atop the $181,788 it collected in donations as part of the competition.

Her organization remains on solid footing, Eggleton said, but for some smaller organizations, the loss of Art Van "is going to be devastating."

How the company's demise might affect America's Thanksgiving Day Parade — which Art Van Elslander saved in 1990 when he wrote a $200,000 check to keep it going — was unclear Thursday.

Tony Michaels, president and CEO of the Parade Co., which puts on the Detroit parade, said Art Van has two years left as the parade's presenting sponsor. 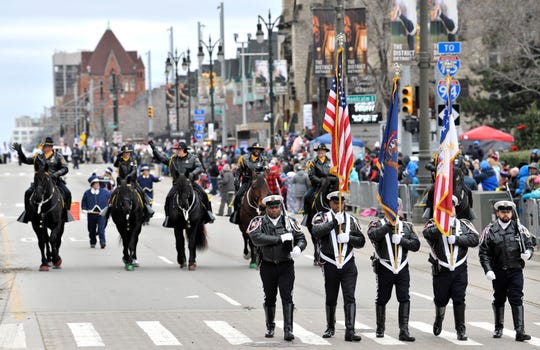 Members of the Detroit Police Color Guard lead the parade, followed by the mounted unit, as thousands attend America's Thanksgiving Parade on Woodward in Detroit in November. (Photo: Todd McInturf, The Detroit News)

“We have to monitor what’s going to happen,” Michaels said. “It’s really a wait-and-see right now.”

Even after Art Van was sold to the private equity firm, it continued on as a supporter of the parade. "That’s what we like to do," Art Van spokeswoman Charles told The News at the time.

Michaels stressed that the Parade Co. is "on solid ground."

"It's a substantial partnership," Michaels said. "We'll be talking with people to replace that, if need be, and go from there. But I just come back to the jobs and the effect that this has on so many lives and so many people."

At its flagship store in Warren, business continued Thursday afternoon with the parking lot nearly half-full and customers wandering through each department.

For customer Donna Donovan of Macomb Township, the closure will be the end of a tradition. Art Van's Warren location was her "favorite place" to go on her lunch. She worked at 16 Mile and Mound.

"I think it's sad," she said as she put a large painting into her car at the store Thursday. "What's going to be left? I'm not an online shopper."