Most Michigan public universities halt in-person classes due to coronavirus

Most Michigan public universities halt in-person classes due to coronavirus

Michigan's public universities reacted Wednesday to the state's first confirmed cases of coronavirus, with most canceling in-person classes and imposing other restrictions as concern spread about the highly contagious disease. 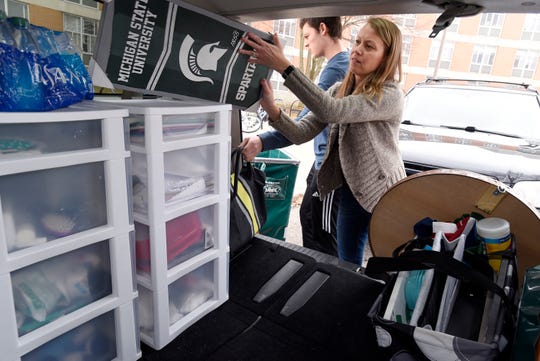 Meanwhile, Dearborn Public Schools announced Wednesday night that Whitmore-Bolles Elementary on the city's west side was closed until results from coronavirus testing was completed after a staff member had been in contact with someone who tested positive for the virus.

MSU was the first school to act Wednesday, announcing classes would be online only until at least April 20 and encouraging students living in dormitories to go home. The Ingham County Health Department confirmed Wednesday that an MSU student "was being monitored" for coronavirus.

"During this time period, students doing purely remote work can return to their permanent place of residence and we strongly encourage this because there are advantages for social distancing," MSU President Samuel Stanley wrote in a letter to the campus community. "But for those not able to go home, we will continue to fully support students in our residence halls and dining facilities." 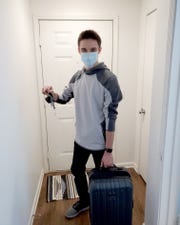 MSU student Shad Soldano planned to go home to Traverse City and spent Wednesday packing up his personal belongings, school work and remaining food at his off-campus apartment. He said some students were upset by the class cancellation, but he thinks it's a smart decision.

"I am glad they did this," Soldano said. "Just thinking about how one person being infected can spread it pretty fast. With the big lecture halls we have here, there are hundreds of people. I will go home to be safe."

From her dorm window on the East Lansing campus, MSU sophomore Madison Mychalowych watched what she described as “nonstop traffic” Wednesday as parents picked up students to take them home.

By Wednesday afternoon, the parking lot outside Spartan Stadium, the university’s football field, had only a few dozen cars in it. On a normal school day, the lot is full of vehicles.

Mychalowych said her roommate had already left East Lansing but she was planning to stay. She’s a member of the women’s rowing team, which was still practicing as of Wednesday, she said.

Mitchell Zacharias, a senior from Grosse Pointe, was also planning to stay in East Lansing while in-person classes were canceled.

Online classes aren’t bad, Zacharias said. They often involve recorded lectures and presentation documents that can be uploaded and shared with students through the internet, he said.

Zacharias expected Michigan State to go to online classes but “not for that long,” he said. “I honestly don’t know what to expect for the next couple of months here.”

The University of Michigan canceled classes Thursday and Friday but announced classes will resume Monday "remotely in alternative formats — and not meeting in person — through April 21," when the current semester ends. The measures include UM's Dearborn and Flint campuses.

UM also announced the cancellation of all campus events involving 100 people or more until April 21.

Oakland University announced the suspension of in-person classes effective 5 p.m. Wednesday and said those sessions would be replaced by "remote learning" starting Monday and continuing through April 25.

Wayne State University extended its spring break for students, scheduled for this week, and canceled all classes until March 23 to plan for the university's shift to online instruction.

Lawrence Technological University will extend spring break by a week to March 22, and teach classes online from March 23-28. The cafeteria also has been closed, and meals will be delivered to student rooms starting March 23. Also, campus events with more than 100 people are postponed until April 3, the university said Wednesday.

Central Michigan University announced it was moving all classes online after spring break through March 20, and that it would decide by 4 p.m. March 19 about classes for the following week.

Michigan Technological University suspended all face-to-face instruction effective Monday until April 17 and moved classes to a virtual instruction environment. The university will decide by April 10 whether to extend the time period.

"We must all stay vigilant to help protect each other and our community from the potential effects of this virus,” Michigan Tech President Rick Koubek said. “University task forces have prepared for and are responding to implications and impacts on the campus community.”

Another Upper Peninsula school, Northern Michigan University, said classes would be canceled starting Thursday and resume in an online/distance delivery format beginning Monday and continuing through April 3. A decision concerning the rest of the semester and final exams will be made by March 30, the school said in a posting on its website.

Following in suspending in-person classes was CMU, which is on spring break this week. The university said in a statement posted on its website that dorms would remain closed for all but international students and student-athletes until March 22. Students will be allowed to retrieve personal items from their rooms on Sunday and Monday but may not stay overnight.

The university also said all CMU-sponsored events of more than 50 people are canceled through March 31.

Macomb Community College is suspending in-person classes starting at 5 a.m. Thursday through March 22. "This pause will allow us to work through the process of moving most classes online," officials said in a statement, adding that

events that involve more than 100 participants are also canceled through April 12.

Some universities are letting students stay in university housing and providing meals, such as Wayne State and Central Michigan.

At Wayne State, housing and dining remain open so students will not need to be compensated.

"We are treating the cancellation of face-to-face classes next week as a closure, like if they were snow days," WSU spokesman Matt Lockwood said.

MSU did not respond to a request for whether the university plans to issue refunds for students living in the dorms. 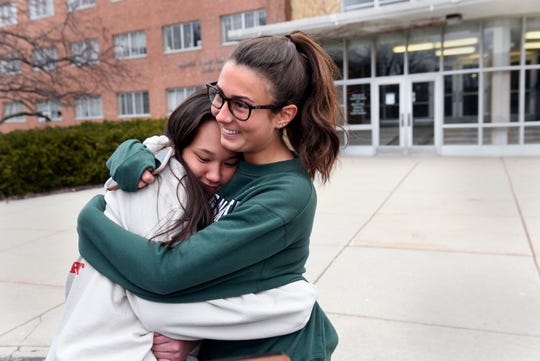 Soldano, 21, a representative in MSU student government, said he does not expect to have problems with online schooling but has heard from other students with higher-level classes with hands-on labs who are concerned about completing school work in the next several weeks.

"A lot of people are upset. It's going to be harder to learn in an online format with the hands-on learning," he said. "Many students who are graduating are worried it's going to continue and they won't be able to walk on stage at graduation."

Some MSU professors have emailed Soldano to express concerns over instruction during the online period, he said, with some saying they are unsure of plans for the next few weeks.

Soldano spoke to his parents Wednesday morning to reassure them he is fine and has been practicing good hygiene. He worries about students in dorms who have nowhere to go or students who are returning home where older family members reside who might have compromised immune systems.

"I hope this will settle down and we can come back," Soldano said.