Metro Detroit hospitals have rapidly expanded the number of patients they can test for COVID-19 as Henry Ford Health System and Beaumont Health have developed and launched in-house tests.

Henry Ford officials say they're able to test up to 100 patients per day with their new test that was deployed Monday, and will expand that to 200 per day by next week, and as many as 1,000 per day within weeks. Beaumont Health system officials, meanwhile, said they started Tuesday to process a "limited number" of tests it developed in-house. 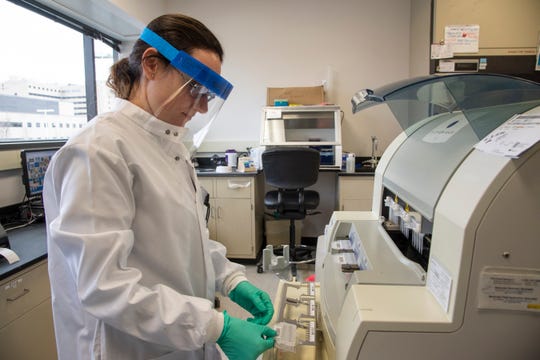 “We’re proud to have developed a mechanism to process tests within our health system. It typically takes months to do this, and we did it in several days. Our lab team’s expertise has allowed us to serve our patients better during this pandemic,” Dr. Barbara Ducatman, chief of Pathology and Laboratory Medicine for Beaumont Health, told The Detroit News.

The Metro Detroit hospital systems are among the first in the country to complete development of their own tests after the federal Food and Drug Administration relaxed guidance for test-developers to speed testing during the COVID-19 pandemic. The developments are expected to ease partially the demand for testing.

The Michigan Department of Health and Human Services confirmed 65 cases of COVID-19 through Tuesday afternoon. The state had an eight-day supply of testing materials as of Monday.

"We believe we're the first hospital in Michigan, and one of about 20 hospitals' labs nationwide. So we're now able to lend that much-needed support to provide more tests with quicker turnaround."

The test developments from the two Metro Detroit health systems are part of what the White House described Tuesday as a nationwide ramp-up of testing in the United States, which has significantly lagged other countries such as South Korea that have rapidly deployed testing.

"All states can now authorize tests developed and used within their borders, in addition to the FDA," President Donald Trump said at a Tuesday morning briefing, citing new FDA policies.

Giroir said commercial laboratories have tested about 27,000 people for the COVID-19 virus for a total of nearly 60,000 nationwide. He didn't say how many people have been tested so far by hospital laboratories such as Beaumont and Henry Ford.

“This is showing the dramatic ramp-up as high throughput comes in,” Giroir said.

Michigan's Democratic U.S. Sen. Gary Peters, who released a plan Tuesday to increase testing across the country, said the much smaller country of South Korea is testing roughly 140,000 people per week. The United States has a population of nearly 330 million compared with about 51 million for South Korea.

On Tuesday, Gov. Gretchen Whitmer also issued an executive order that would allow hospitals and care facilities to sidestep state regulations temporarily to ensure COVID-19 patients have access to care.

The order allows hospitals to increase their number of beds beyond what is usually permitted under state guidelines and authorize the construction of mobile facilities to deal with an expected influx of patients in Michigan.

On-site processing by the hospital systems will allow doctors to get results back within hours instead of days. Michigan Medicine, the University of Michigan's health system, also has an in-house test in development, which is expected to be ready to launch in a matter of weeks.

Health systems are conserving their supplies by reserving their faster in-house tests for inpatients. Tests for those with a less severe illness will continue to be processed by the Michigan Department of Health and Human Services or through commercial laboratories.

"(We) must conserve our testing supplies," Ducatman said. "That’s why we’re only processing our own tests for certain patients who meet COVID-19 testing criteria and are admitted to our hospitals or are receiving treatment in one of our emergency centers.”

The Detroit-based Henry Ford Health and Royal Oak-based Beaumont health systems are offering curbside screening for patients with less severe symptoms. Beaumont curbside is seven days a week, though weekend hours may vary, according to the health system.

Henry Ford Health will soon be rolling out curbside testing. Allegiance Health is operating a drive-thru screen center on the surface lot of One Jackson Square, 100 E. Michigan Avenue, in Jackson.

Curbside screening centers are intended for people who are experiencing fever, cough and shortness of breath, and who were exposed to someone diagnosed with the virus, Henry Ford officials said.

They asked that people who don't meet criteria for testing, such as recent domestic or international travel that may have exposed them to the virus, avoid using the service to make sure it's available for those with the greatest need.