Lansing —The Michigan Senate and House voted to allocate $125 million more to respond to the coronavirus as the virus spreads across the state and has begun causing havoc for the state's economy.

On Tuesday night, the Senate voted 37-0 in favor of the supplemental spending bill. The House then voted 92-0 in favor of it. The $125 million would be in addition to $25 million the Legislature approved to spend on coronavirus last week. 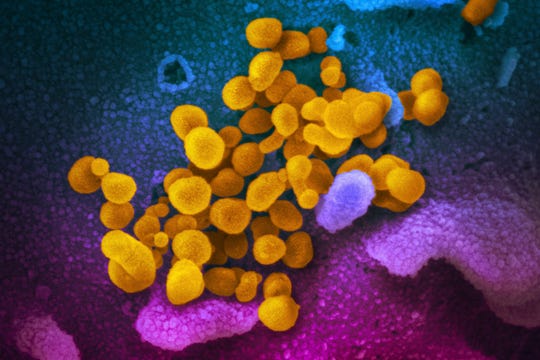 An undated electron microscope image shows the Novel Coronavirus SARS-CoV-2, yellow, emerging from the surface of cells, blue/pink, cultured in the lab. Also known as 2019-nCoV, the virus causes COVID-19. The sample was isolated from a patient in the U.S. (Photo: NIAID-RML)

"We are working with our governor to direct necessary funds to slow the spread of COVID-19 in Michigan," said Senate Majority Leader Mike Shirkey, R-Clarklake, in a statement. "Today’s actions make additional state dollars available to deploy across Michigan."

Of the new dollars, $50 million will go to  "health care capacity" and will be distributed to providers in the state to expand capacity to deal with the virus, according to the Senate Fiscal Agency.

Another $40 million will go to general state efforts to combat the virus, with focuses on monitoring, laboratory testing, contact tracing, infection control and continuation of critical state government functions. The Legislature had previously allocated $10 million for these expenses.

Senate Minority Leader Jim Ananich, D-Flint, said the money would be used where it’s "needed most to address this pandemic in the coming days, weeks and beyond."

But the Senate didn't vote on Tuesday night on an education-focused bill to shorten the number of days that schools are required to meet this year. The Senate also didn't approve a policy to institute a requirement that schools pay hourly employees during the current three-week closure instituted by Gov. Gretchen Whitmer on Thursday.

"Over the past few days, our organizations — from both the labor and management sides of the education community — have worked together to find a legislative solution to ensure all school employees continue to be paid during this crisis," the groups said. "We agreed on an approach that would bring some certainty around pay and days/hours requirements to school districts and employees alike."

"They certainly didn’t decide to close," Hertel said of the schools. "They had to because of a public health emergency."

"The primary discussion at this point is about health," Stamas told reporters.

The Michigan Senate and House won't reconvene until March 25, when they could reconsider voting on the school policy.

Michigan has 65 confirmed cases of COVID-19 according to numbers released by the Department of Health and Human Services on Tuesday afternoon.

The Centers for Disease Control and Prevention had tracked 4,226 confirmed and presumptive cases of COVID-19 nationally as of noon Tuesday. There have been 75 deaths, according to the CDC.