A man in his 50s at a Beaumont Health hospital appears to be the first person in Michigan to die after testing positive for COVID-19. Michigan has 80 cases

A man in his 50s at a Beaumont Health hospital is the first person in Michigan to die after testing positive for COVID-19.

The man had other underlying conditions, according to the hospital, and died early Wednesday morning at one of the health system’s four Wayne County hospitals. He was a Wayne County resident, state health department spokeswoman Lynn Sutfin confirmed. 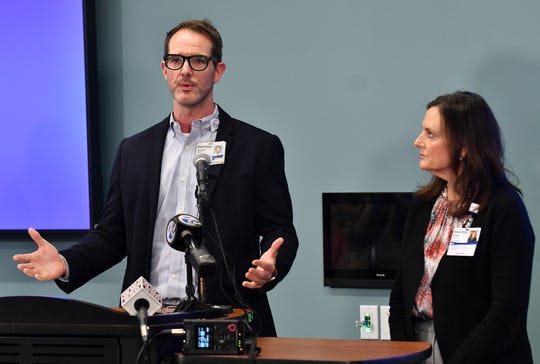 From left, Dr. Nick Gilpin and Beaumont Health Chief Nursing Officer Susan Grant hold a press conference at be Beaumont Service Center in Southfield, Mich. on Wednesday, March, 18, 2020. This was the announcement of the first death of a patient with COVID-19 in Michigan. (Photo: Robin Buckson, The Detroit News)

The death came as the state health department reported Michigan had 80 confirmed positive coronavirus cases Wednesday afternoon, and tacked on another 30 in a later press conference, bringing the total to 110.

"People need to take this seriously," Gov. Gretchen Whitmer said during a Wednesday press conference at the state's emergency operations center. "We had someone die today because of COVID-19. There are other people that have been diagnosed that are fighting for their lives.”

Beaumont Health officials couldn't discuss the details of the patient's case or what symptoms he arrived with because they said they were still gathering information.

“Our medical team went to extraordinary efforts to care for this patient and we are deeply saddened by his passing and empathize with his family,” Beaumont Health Chief Nursing Officer Susan Grant said at a Wednesday press conference in the system's  office center in Southfield.

The hospital continues to care for other COVID-19 patients and is "united to battle this virus," Grant said. The number of infected patients the eight-hospital, 3,000-bed system is in the "dozens" and changes by the hour, said Dr. Nick Gilpin, Beaumont Health's medical director of infection prevention and epidemiology,

The Royal Oak-based health system has sent 1,100 tests to state and national labs since Thursday, processed 500 tests of its own Tuesday and screened roughly 1,500 patients Tuesday.

Curbside screening has been expanded to Beaumont's eight hospitals. But officials recommend calling the coronavirus hotline at (800) 592-4784 and speaking with a nurse before heading to the hospital.

The system's testing remains limited even as it has built a large-scale COVID-19 operation, Gilpin said. 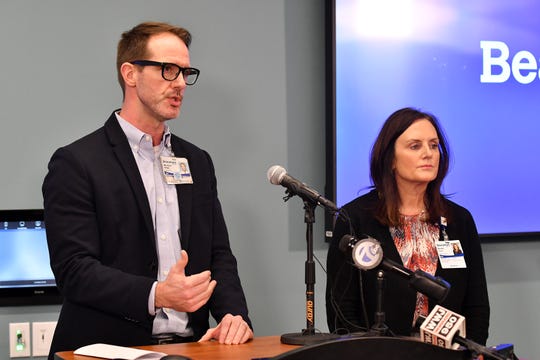 From left, Dr. Nick Gilpin and Beaumont Health Chief Nursing Officer Susan Grant hold a press conference at be Beaumont Service Center in Southfield, Mich. on Wednesday, March, 18, 2020. This was the announcement of the first death of a patient with COVID-19 in Michigan. (Photo: Robin Buckson, The Detroit News)

“This is an unprecedented situation in Michigan and across the country right now," he said.

"We simply do not have the bandwidth, the testing supplies to test everyone ... testing facilities are being overrun. I want to be clear that not everyone with COVID-19 symptoms, which include fever, cough and shortness of breath, needs to be tested."

People who are experiencing mild symptoms who don’t have underlying medical conditions, are young and otherwise healthy do not need to be tested, Gilpin said. Those with medical conditions might be directed for further evaluation, he said.

"There’s a very good chance that many of you may have COVID-19, frankly, and testing you is not going to necessarily make a difference with regard to how we treat you," Gilpin said.

The hospital has put in place visitor restrictions and canceled nonessential surgeries. Physical, speech and language therapy, cardiac and pulmonary rehab and other nonessential services also have been put on pause.

"Our mission right now is to protect our patients, the public and our staff," Gilpin said. "We are providing our staff with proper safety equipment and following all infection control procedures."

Chief Medical Executive Dr. Joneigh Khaldun said later at the state press conference there were another 30 positive cases processed Wednesday, bringing the total closer to 110, but she did not provide details on the additional 30.

The state numbers do not include data from private labs, which local health departments have begun to receive separately from the state. The state's once-daily afternoon reports only include those test results it has received back as of midnight the previous day, also causing differences between state and county data.

For example, Oakland County reported Wednesday afternoon that, once more recent results and private lab data have been taken into account, it has a total of 59 confirmed cases, an increase of 43 from Tuesday.

The state still is working to incorporate private lab data into its daily positive test count, but some "technology and communication" issues have so far stood in the way, Khaldun said. Whitmer indicated the state would act to move the process along more efficiently.

"It is very possible you'll see an order mandating the sharing of information so that we can have a handle on this," the governor said.

•In an employee memo, Blue Cross Blue Shield of Michigan said two staffers had tested positive. One worked remotely, was last in the Detroit Tower on March 5 and had "limited contact with a small number of other employees who have been informed," according to the memo. The second employee worked at the Blue Care Network/Commons building in Southfield as recently as Tuesday, the memo said. The floor where that person worked is closed for cleaning through Friday.

•Detroit Metro Airport officials confirmed a worker for a service provider with a North Terminal carrier tested positive. Other details were not released.

•Two Wayne State University employees also tested positive, according to the school. They are under the care of clinicians and in isolation, WSU President M. Roy Wilson said in an email to the university community.

•Representatives for the Childtime learning center in Chesterfield Township said a child who attends the center "has received an assumed positive diagnosis." The location on 23 Mile was listed as "temporarily closed" Wednesday. "We are partnering with the health department in order to prevent the further spread of this illness," center representatives said. "In keeping with their guidance, we will remain closed for 14 days, or until further notice."

Of the 80, 34 were hospitalized, 31 are isolating at home and 15 have unknown accommodations, according to state data. 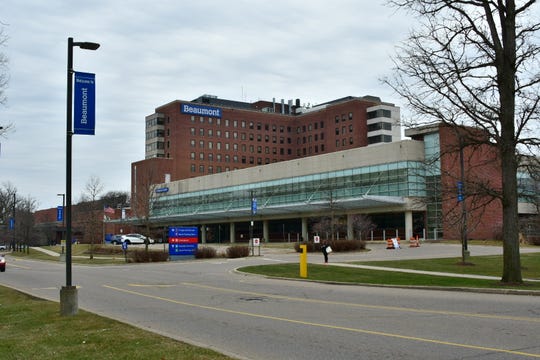 "To be clear, even though the private lab info is not included in our count on the website right now, action is still occurring to protect public health at the local level including contact tracing, notifications, etc.," Sutfin said.

As of Wednesday, 7,038 people had tested positive for COVID-19 in the United States and 97 people have died from the virus nationwide, according to the federal Centers for Disease Control and Prevention website.

The news comes as Detroit automakers on Wednesday announced the closure of plants amid the coronavirus pandemic. At least two workers at Ford and FCA plants tested positive for the virus on Tuesday.

The governor also has begun working with private industries to produce materials such as gowns, masks and hand sanitizer. But she's urged the federal government to do more to respond to the pandemic, consistently citing the state's limited supply of testing kits.

“COVID-19 is in our backyard, and it’s with us,” said Beaumont Health's Gilpin, who added that 80% to 90% of the people who get the virus will recover from it “uneventfully.”