Sarah Farner, who has been in Italy with her husband, Craig, for more than a year for his military deployment, shared some grim details of life there

Members of a military family from Michigan have been on lockdown in Italy for more than a week and are using their online platform to warn others hoping their home state "doesn't get to the point we are."

Sarah Farner, who has been in northern Italy with her husband, Craig, for more than a year for his tour with the U.S. Air Force, shared some grim details of what life is like in a society that has essentially shut down in the face of a pandemic that has killed thousands. 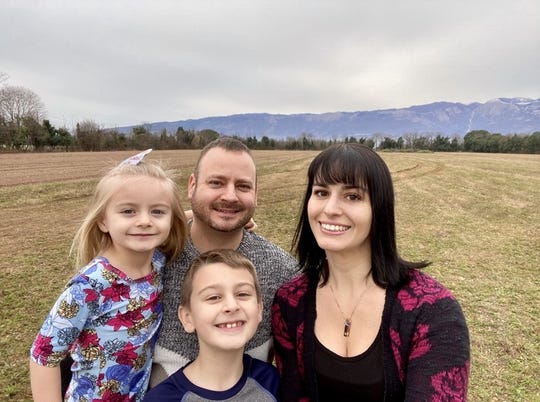 The Farner family in front of the Dolomites mountain range, northern Italy. (Photo: Courtesy of family.)

"The folks who died are not receiving a burial or goodbye for their family," she said. "The Italian government/military are packing them up in containment trucks and disposing of the bodies, I'm assuming by cremation."

The couple and their two children are stuck in northern Italy, near regions with many cases of coronavirus. They were notified Feb. 23 that the Lombardy and Veneto regions would be on lockdown.

"It has now spread to our region as well," she said. "The base my husband works at has gotten its first positive case, which was announced (Tuesday.)"

During the lockdown, they are only able to leave their triplex for vital reasons. Restaurants are closed, though options for delivery are growing, and the Farners look for silver linings where they can.

"There is now wine and gelato delivery available — gotta love Italy," Sarah said. "We can only leave the house for necessary groceries, essential medical appointments or work."

Though Craig has three years left in his deployment, being forced to shelter in place thousands of miles from their home in Milford has come as a shock to the family.

Craig, 37, was raised in Flint, while Sarah, 34, grew up in Milford. The two were married in Lake Orion 10 years ago and have two kids, a 9-year-old son, Lucius, and 5-year-old daughter, Myla.

Typically, when Craig deploys, the kids and Sarah move back to Milford to be with family. But this time, the family never separated, leaving them together in the country that is suffering  the greatest impact from the virus.

Italy surpassed China in the number of coronavirus deaths Thursday with 3,405 in a total of 41,035 cases of infection, reports say. The European country added 5,322 new cases Thursday, setting record high numbers of infection compared with China's population, which is about 20 times larger than Italy's.

► More:Complete coverage of the COVID-19 pandemic

By March 1, the school on Craig's base was closed and the family began to home-school through several online programs developed by the school.

"Hours and hours of projects for each kid. It has been really brutal," Farner said. "On March 7, the base canceled all official travel from Italy to the U.S. and a day later, the Italian government officially released its decree for the full lockdown of the country."

Restaurants and sit-down places closed, along with all shopping that wasn't grocery or medically related.

"I’m talking even if a grocery store has, say, school supplies, they aren’t supposed to sell them. Imagine 70% of Walmart shut down. You can see all the products, but can’t purchase it if it’s not grocery, alcohol, tobacco or medicine," Sarah said.

"We recently have been given permission to take walks for exercise along with the kids. Only one person per family may grocery shop at a time. Each time one leaves the house, they have to have paperwork on them in case they are pulled over and must prove they are out for the reason claimed," she said.

The Farner family in Rome, Italy at the Coliseum. (Photo: Courtesy of family.)

And for people seeking health care in Italy, if it's not an emergency, "you don't get seen," Farner said.

"My husband has had a few appointments for specialists canceled until further notice. There are no beds in most hospitals and many areas are contaminated. All dental appointments have been canceled unless it is life-threatening. The same goes for about any service."

After the record-high numbers released Thursday, the Italian government got in touch with phone agencies and is keeping an eye on people traveling more than 300 meters (about 328 yards) from their home, Farner said.

"Because of (the number of deaths), they are thinking of implementing even stricter guidelines. The (grocery store) on base is now limiting how many individuals can come in at one time, and the Italian Carabinieri, (the national guard) can often be found standing outside the store. The department store now has most sections of merchandise blocked off with tape, and only purchases of necessity are available."

The Farners created a Facebook page, "Military Life World Travels" to keep their friends and family up to date on what it's like for them in northern Italy during the outbreak because there's "no end in sight," she said.

"This is going to get worse here for sure. Even if cases stabilize shortly, the sheer amount of folks hospitalized coupled with how long they need to be hospitalized makes things brutal," Farner said.

Although they fear for the safety of their family, she said they're more worried about at-risk relatives in Michigan.

"Hopefully, the U.S. is at what’s the peak of it and fully know what to expect during a lockdown," said Farner, who said she's heavily monitoring American news. 'The situation is very frightening to us. Being in Italy during this time of the corona outbreak, we fear the United States can become like it is here, if certain precautions do not take place."