Asian Americans endure an outbreak of bigotry: 'It's something we cannot control'

Fear, stress have put an unfair target on Asian Americans locally and throughout the country amid the coronavirus pandemic

Asian Americans endure an outbreak of bigotry: 'It's something we cannot control'

Hamtramck — The couple asked for Amish chickens and Yoshiro Lee grabbed a box from the cooler at the Polish market where he cuts meat. The woman said she wanted them checked.

"I said no problem, I can open the package for you," Lee says, and then her husband smirked and Lee realized what she meant.

The woman didn't want them checked for freshness or size or the proper number of wings. She wanted them checked for coronavirus, because she assumed he was Chinese and she somehow connected dots from a meat locker on Caniff Street to a global pandemic and a place that neither Lee or the chickens had ever been.

Yoshiro Lee, 30, opens a pack of meat to cut at Bozek's Market in Hamtramck on March 23. He was born in California and his lineage is Hmong. But he had two ugly incidents with customers last week. One couple demanded that the frozen chickens Lee brought from the cooler be tested immediately for coronavirus. Then a large, angry man backed Lee down an aisle and around a corner while shouting that Lee needed to go back to China and take the virus with him. (Photo: Robin Buckson, The Detroit News)

These are worrisome times, and there's an extra layer of concern if you're Asian by heritage or appear to be. Incidents have not reached epidemic proportions, but reports of insults and assaults have crossed the continent and even the ocean.

"We know it's going on all over the place," says Shenlin Chen, president of the Detroit chapter of the Association of Chinese Americans (ACA). "We hope to give the message that we're proud of the United States. We hope to work with everybody else to fight this virus."

But for most people, that's simply assumed. While COVID-19 has wreaked havoc in Italy, Italian Americans don't have to announce their good health or worry about what message they might send if they wear a surgical mask.

The worst-case specter of Vincent Chin hangs over every troublesome interaction. President Donald Trump's use of "Chinese virus" instead of coronavirus is jarring at best, say Chen and others, and potentially inflammatory, even if the disease originated in the Chinese city of Wuhan.

At the market where Lee has worked for nearly five years, he handled his largest problem himself.

An hour after the incident with the chicken, he says, another customer erupted as Lee began to fill his order: "I don't want no Chinese hands on my meat!"

Lee, 30, is a former stuntman. When he accidentally gashed his hand with a knife Friday afternoon, he bandaged the cut, found a fresh pair of white cotton work gloves, pulled blue rubber gloves over those and went back on duty.

He is difficult to bulldoze, but the customer was well over 6 feet tall and he backed Lee down a short aisle in the refrigerated meat room and around a corner.

"He was yelling and yelling," Lee says. "He said we don't belong here. We should go back to China and take our virus with us."

Lee was born in California, as it happens. His ancestry is Hmong, and he was raised in Japanese culture and tradition, which is how he came to adopt Yoshiro as a name.

He knows he should not feel personally wounded when customers see him and tug the collars of their shirts over their noses like surgical masks. And he knows there's no such thing as an instant COVID-19 test for poultry.

Fear and bigotry are real, however, and they tend to surface in combination in times of national stress. After 9/11, the targets were Muslims, though Sikhs wearing turbans were sometimes close enough.

"I was talking to my Muslim friends about this," Lee says. "I guess it's our turn now."

Dateline, New York: A man on the subway sprays an Asian passenger with insults and Febreze. London: two to four people pummel a student from Singapore, with one of them snarling, "I don’t want your coronavirus in my country."

In San Francisco, says the New York Times, a 26-year-old who relocated from China five years ago is spat on by a man who had yelled at her on the street. In Southern California, a 16-year-old is beaten badly enough that emergency room doctors insist on MRIs.

Back in New York City, a 23-year-old woman is punched in the face, and a 47-year-old walking his 10-year-old son to a bus stop is shoved by a 44-year-old who screams, "Where the (expletive) is your mask?" 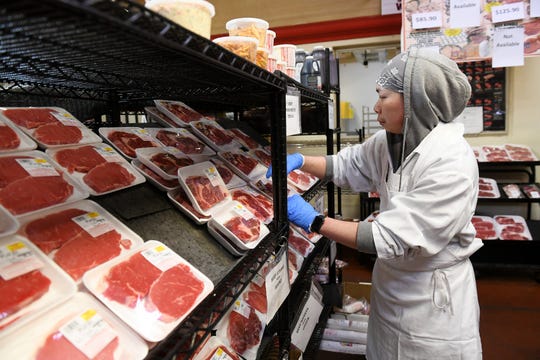 Yoshiro Lee, 30, stocks steaks after he cut them at Bozek's Market in Hamtramck on March 23. (Photo: Robin Buckson, The Detroit News)

In Ferndale, in the meantime, nothing untoward is supposed to happen. Alexandra Simon knows that. The city is welcoming and cool, and a good place to be a 36-year-old adopted from South Korea and raised Jewish in White Lake and West Bloomfield.

"But people are frightened," Simon says, "and fear can push people to do things they might not normally do."

Or, it can keep them from doing things.

Simon writes for the Hardball Times and co-founded a Detroit Tigers blog called Glass Half Fulmer. She had planned a solo springtime trip to Florida, but canceled it — partly because of Floridians' casual approach to coronavirus precautions, and also because it seems like a poor time to be visibly Asian in a strange airport in an unfamiliar city.

It does not help, says state Sen. Stephanie Chang, when the president suddenly stops saying "coronavirus" or "COVID-19," the term preferred by the World Health Organization, and adopts variations of "Chinese virus."

It's a switch from science to scapegoating, says Chang, D-Detroit, whose parents emigrated from Taiwan.

"People in public office need to be responsible for their words and their actions," she says. "In this case, referring to a virus by an ethnic name is dangerous." 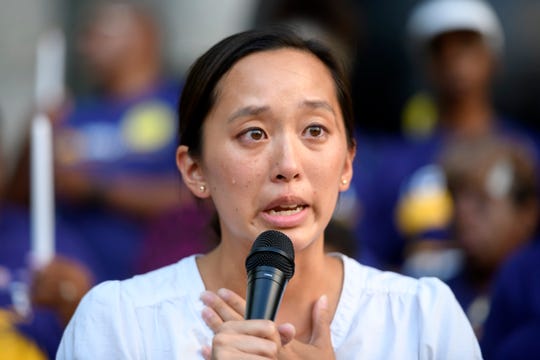 FILE - Michigan State Representative Stephanie Chang sheds a tear while speaking in support of the members of SEIU Local 1 Janitors a strike authorization announcement in front of One Campus Martius, in Detroit, July 23, 2018. (Photo: David Guralnick, The Detroit News)

Michigan, she notes, is where Vincent Chin was murdered in 1982, and "it would be terrible for something like that to happen again."

Chang, 36, was not yet born when Chrysler factory supervisor Ronald Ebens beat Chin to death with a baseball bat after a brawl in a Highland Park strip club.

According to some witnesses, Ebens had hurled racial slurs and blamed Chin for the loss of American jobs as Japanese cars made inroads in the U.S. market.

Chin had corrected him — he was Chinese American — but the distinction did not ultimately matter to Ebens and stepson Michael Nitz. They pleaded guilty to manslaughter and were sentenced to probation, prompting outrage that lingers almost four decades later.

Chen of the ACA says memory and nervousness have driven an Asian-American push toward Metro Detroit gun shops. One dealer in Madison Heights told The Detroit News  that amid a crush of customers panicked by the coronavirus, Asian Americans have risen from 8% to 35% of his buyers.

"There are always people who see a situation differently or tie it into some racist thoughts," Chen says. "It's something we cannot control."

Perception has even affected a benign custom many immigrants have carried with them to the United States, she says — the routine wearing of surgical masks.

"In our culture, it is very common for a healthy person to wear a mask," says Chen, who moved from Taiwan to Philadelphia in 1989 and to Detroit 10 years later. "You protect yourself and others. We think this is wise."

Now, "you have to consider whether other people see you as a danger."

At the Polish market, Lee used to think the greatest menace was the blade in his own hand. Others' fear of COVID-19 has made him re-evaluate.

Verbal abuse is easy to dismiss, he says, brushing an imaginary insult from the shoulder of his thermal sweatshirt. But someone large, angry and irrational can't be ignored.

"I kept telling him, 'I eat pork chops and steaks just like you,'" he says, and finally the man left, fists closed and empty-handed.

Lee shrugs. "Everyone has a right to be scared," he says — but of the ailment, please, not Asians.