A WMU student who died from the coronavirus showed his faith through all the things he did for others, said classmates.

Bassey Offiong liked to refer to his friends as saints, but according to them he was the real holy man.

How else could someone spend four years at college without smoking, drinking or cursing?

How else did he know as much about scripture as sports? Why else would friend after friend describe him as an angel (and not an earthbound one)?

Bassey, 25, was a month away from graduating from Western Michigan University when he was struck by something similar to a story in his well-worn Bible.

It wasn’t boils or locusts but a plague that seized Bassey, doctors said. Coronavirus killed him last month just as he was about to embark on a career as a chemical engineer.

“This is so horrible,” said Lynn Crutcher, 22, who knew him from WMU. “He was the most caring man I’ve ever met.”

Bassey, who grew up in Detroit, was a constant source of light, Crutcher said. He saw friends at their worst but brought out their best.

Whether studying at the school library late at night or relaxing in the lounge, he was always happy, cracking jokes, lending a shoulder to cry on, friends said.

No matter what a student was going through, he assured them it would all work out in the end.

“He touched so many people,” said Sy Harris, 21, a student at Western Michigan. “He always knew just what to say.”

Bassey was the epitome of a gentle giant, Harris said.

At 6-foot-1 and 279 pounds, he had played defensive tackle for the Renaissance High School football team.

Classmates at Renaissance and WMU said he was humble and sweet.

“He was such a beautiful soul,” said Tish Taylor, 24, one of his high school friends from Belleville.

Bassey might have been hurt by his bulk. People who are overweight are more vulnerable to the ravages of COVID-19, medical experts said.

He also had dealt with a serious health issue as a youngster.

When he was 10, doctors had told him he might not live long enough to become an adult, he wrote on Twitter in November. 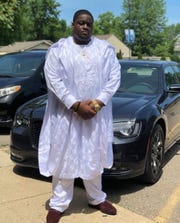 He didn’t say why doctors were so concerned, and his family declined to discuss the matter.

Physicians had also told Bassey he would be on medication for the rest of his life, he said on Twitter.

He proved them wrong on both counts. He not only zoomed past 18, but did it without any medicine at all.

“The closer my birthday gets the more grateful I am for what God has brought me through,” he wrote on Nov. 19.

And he wasn’t done yet.

After college, he wanted to work for L’Oreal, the Paris-based French cosmetics colossus, creating a line of makeup made from organic materials.

He had even learned to speak French.

“He’s just someone who thinks so big,” said his sister, Asari.

Last month, Bassey didn’t feel good. He had the tell-tale signs of COVID-19 — exhaustion, a fever, shortness of breath.

He tried to get tested for the virus but was turned down several times, said Asari, 30, of Baltimore, Maryland. One medical staffer told him he had bronchitis.

Bassey traveled to Metro Detroit, where he spent the last week of his life on a ventilator at Beaumont Hospital in Royal Oak.

Faith had always been a big part of Bassey’s life.

As a teen, his days were full of school, football and church, according to his social media accounts.

At WMU, he joined his fraternity brothers in community service projects, once filling 300 lunch bags for the poor as part of a Martin Luther King Day celebration.

As a junior, he began posting a daily Bible verse on his Twitter page, explaining what it meant to him.

He could have been talking about himself when he explained Micah 6 in January.

“Pleasing God isn’t hard,” he wrote. “He’s not looking for anything flashy. All our Father wants from us is to do your best with a sincere and loving heart.” 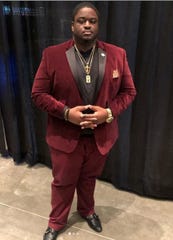 If Bassey was an emissary from above, he wore it lightly.

Friends said he felt strongly about his faith but never tried to bash them over the head with it.

'He was always there'

Bassey’s piety was far from an act, friends said. In fact, he was the most sincere person they knew.

His faith was revealed in how he happily went out of his way to help anyone in need, they said.

“He was one of the most genuine people I’ve ever encountered,” said Brandon Lewis, 25, who was a friend from Detroit.

Kaye Johnson was emotionally distraught while attending WMU, struggling with her grades and switching majors.

Bassey helped her with science classes, breaking down the complex topics into their simplest components, she said. He even helped her little brother with math.

Johnson, 24, of Harper Woods, graduated and is now a social worker.

“He was the sweetest person I knew,” she said. “He was always there for me no matter the situation.”

Even Johnson’s father liked the guy who was spending so much time with his daughter.

Deandre Johnson said Bassey was unfailingly polite and calmed his nerves whenever he and Kaye went out.

“I can remember him telling me, ‘Don’t worry, Mr. Johnson, she’s in good hands,’” Deandre said.

Now that he’s gone, it might offer comfort to his loved ones.

No matter how much we suffer on Earth, Paul said, it will be minuscule compared with the glory that awaits believers in the afterlife.

Or, failing the Bible, Bassey’s friends could turn to a more modern mode of communication.

“No matter how dark things may look right now we have to remember to always be grateful for what we have,” he wrote on Twitter in November.

“People may forget what we do but people will never forget how you made them feel.”