In Michigan, deaths were down in March, but 'it doesn't feel that way'

Preliminary statistics from the Michigan Department of Health and Human Services record 5,929 deaths in March 2020

In Michigan, deaths were down in March, but 'it doesn't feel that way'

Detroit — Despite the spread of a global pandemic that has ripped its way through Michigan, infecting nearly 24,000 people and killing almost 1,400, overall deaths in the state were down significantly in March compared to past years, preliminary health department statistics show. 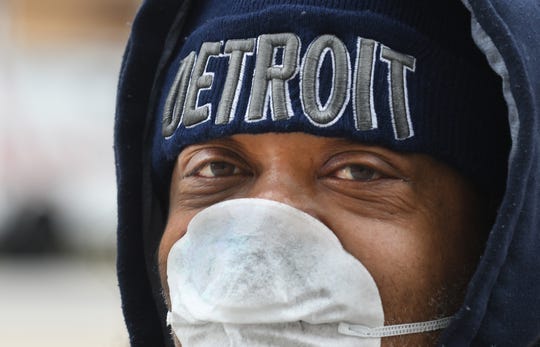 Luther Parks of Detroit waits for the bus March 30 in downtown Detroit, "Haven't been out in a couple days, it's quiet especially for a Monday." As for how he is doing, "They say I have to be smarter and I have to endure." (Photo: Daniel Mears, The Detroit News)

Preliminary statistics from the Michigan Department of Health and Human Services record 5,929 deaths in March 2020. On average, the month of March has seen 8,542 deaths between 2015 and 2019.

"It doesn't feel that way," said the Rev. Wendell Anthony, president of the Detroit branch of the NAACP, when told of the stats. "The numbers may reflect that (deaths are down), but there's so much death and sickness around us, locally and nationally, that everything points to it being up."

The coronavirus has hit Detroit harder than any community, or county, in Michigan. Among its 348 virus-related deaths in the last month, Detroit has lost police officials, a firefighter, educators, a bus driver and a state lawmaker.

The virus has so overwhelmed local resources that the Wayne County Medical Examiner has rented refrigerated trucks to expand storage capacity from 300, with two-thirds full, to 450. State officials are also looking for temporary storage options.

The coronavirus reached Michigan on March 10, when two infections were reported.

By mid-March, Gov. Gretchen Whitmer ordered all schools, bars, and restaurants closed, and on March 24, a "stay at home" lockdown was instituted, requiring most of Michigan to stay home in most circumstances.

In the month since its arrival, the virus has contributed to 1,392 deaths, as of Saturday. 85% have been in Metro Detroit.

So why were deaths down in March?

Fatal car crashes are down, according to preliminary Michigan State Police statistics, but that's only a small part of the answer. There were 67 car crash deaths in March 2019 compared to just 22 in March 2020. Car crashes overall were down more than half in March, 11,069 compared to 23,390 the previous year.

Driving itself is way down in Metro Detroit. According to Streetlight Data, a website that collects automotive GPS data for transportation planners, miles traveled are down 71% in Wayne County, 74% in Macomb County and 81% in Oakland County.

Bob Wheaton, spokesman for the state health department, stressed the preliminary — and incomplete — nature of the numbers.

"We would expect more deaths to be reported," Wheaton said in an email.

For instance, states sort out resident deaths that took place in another state, and vice versa, he added. That process can take months.

And when a paper death certificate is used, it can take "seven to 10 days or more" to reach the state, he said. 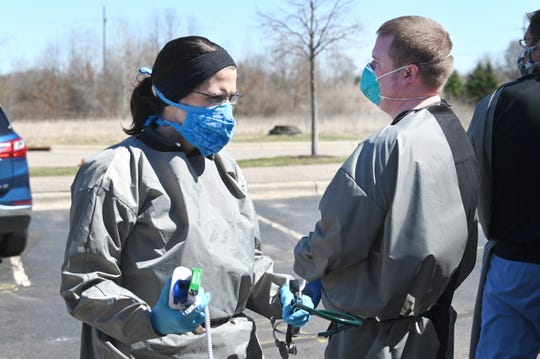 Dr. Danielle Leslie carries the COVID-19 test given to a drive-up resident at the Mobile Care Unit outside the Clarkston Medical Group on Thursday, April 2, 2020 (Photo: Max Ortiz, The Detroit News)

While the health department said it was too early to dive deeper into the numbers, police in some of Michigan's largest communities say crime is down "significantly" during the lockdown.

As Detroit has borne the brunt of the coronavirus within Michigan, the Detroit Police Department, which works face-to-face with the public, has suffered more than most in law enforcement.

At the heights of the crisis, about 500 officers were quarantined. About 450 officers of them have returned to service. As of Friday, the department had still had 478 staffers on quarantine — 369 sworn officers, along with 109 civilians. And 186 members of the department have been confirmed for the virus, including Police Chief James Craig.

To make sure there wouldn't be gaps in service, the department has had to move people in specialized units onto road patrol.

"Our most important job is responding to emergency runs," Craig said. "We have never lost our ability to do that."

David LeValley, an assistant chief of the Detroit police, wasn't surprised to hear that death was down, considering the circumstances.

"Crime is down, calls for service are down, and there's less people out on the street, so it doesn't surprise me that there would be less deaths in the state of Michigan, just because when people are at home, they're probably less happy to be involved in any kind of an accident," LeValley said.

Detroit police investigated 13 homicides in March, compared to 14 last March. Despite the lockdown, fatal crashes were actually up. There were 12 compared to nine last March.

Prior to Gov. Gretchen Whitmer's stay-at-home order, which took effect March 24, Detroit had been averaging about 590 "part one" crimes a week in 2020, LeValley said. These are homicides, rapes, robberies and aggravated assaults.

Detroit has had to shuffle personnel to keep road patrols going and maintain its ability to respond to crime. The nature of those road patrols has changed to include lockdown enforcement.

"We have all of our officers doing spot checks on all the parks and gas stations, the locations where people are congregating," LeValley said. "They're breaking up groups, sending them home."

Through Thursday, the department had conducted 3,788 spot checks. Detroit police have issued 875 warnings, written 206 tickets, and broke up 17 house parties, he said.

While specialized units had to be put onto road patrol in Detroit, it was the opposite in the suburbs, wHere fewer police runs have opened up time for cold-case investigations, or to do community outreach at a level not normally possible.

"As far as the drop in crime and auto accidents and fatalities, it's significant," Dwyer said.

Road patrols continue in Warren, but the slowdown has allowed police to shift resources to investigative work, Dwyer said.

"Because the arrests are down and the crime is down, we look at back logs and move forward on some of the cases that were perhaps cold cases," Dwyer said.

Six Warren police officers are confirmed to have the virus, Dwyer said, while five others are on quarantine. The slowdown in criminal activity allows those gaps to be filled more easily. 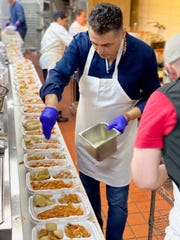 Violent crime is low to begin with in Troy, said Sgt. Meghan Lehman, a spokeswoman for the Troy Police Department. Most of the crime it deals with are property crimes, specifically retail theft. But even that is down.

From March 23, when Whitmer announced the "stay at home" order, until April 6, Troy police handled 849 calls for service, compared to 1,836 in that same timespan in 2019 — less than half.

Troy has had one civilian staffer suspected to have the virus, but it has not been confirmed, Lehman said.

The crime slowdown in Troy allowed its police to take a page from their neighbors in Sterling Heights and offer lights-and-sirens birthday celebrations, usually for children, after their parents make requests.

Lehman said Troy was working through a list of about 120 requests.

Lt. Mario Bastianelli, a spokesman for the Sterling Heights Police Department, said "this is uncharted territory for everybody" in explaining the rise of the birthday celebration during the virus crisis.

Bastianelli says that in normal times, there'd be too much everyday business to handle any great amount of birthday requests. Sterling Heights police and fire collaborate on these requests, when possible.

"We want to bring as much comfort as we can, and let people know to keep the faith, we're here for them," Bastianelli said.

Back in Detroit, Anthony pointed toward the job market for black people, and the community's irregular access to health care as two reasons the virus has torn through the city so violently.

"Black people are, for the most part, service workers," Anthony said. "We're the ones that are out there on the street picking up rubbish, or delivering food. We're in the police department, the fire department. We're at McDonald's and Burger King."

"Add that up with pre-existing conditions like diabetes, hypertension and cancer, and the fact that many of us don't have health care, and we don't have the resources we need," Anthony added. "This isn't just Detroit. This is all over the damn country."

"I know what the numbers say, but for the boots on the ground, the reality is it's enormously dangerous out here," said Detroit Fire Commissioner Eric Jones.

Jones urged people to heed the advice of health experts to protect the safety of first responders.

"We have to follow the guidelines and practice social distancing, cover our coughs, wearing a mask in public, and limiting our time in public," Jones said. "If we do that, and if we minimize our contact with each other, it would help us." 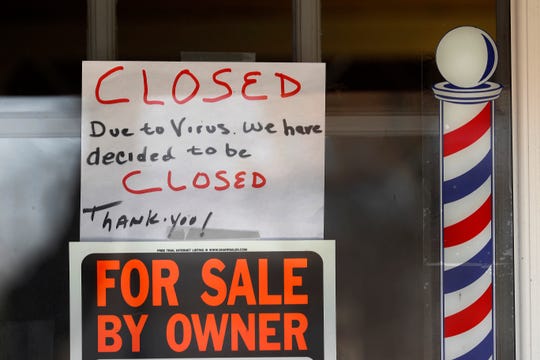 "For Sale By Owner" and "Closed Due to Virus" signs are displayed in the window of Images On Mack in Grosse Pointe Woods, Thursday, April 2, 2020. (Photo: Paul Sancya, AP)

Karen Dumas, a longtime Detroit media personality who regularly appears on Fox 2 Detroit's "Let It Rip" and Charlie LeDuff's "No BS News Hour" podcast, said the virus's uneven fallout has "pulled back the scab" to reveal the consequences of local disparities in health care and economic opportunity.

"This is a call to admit our often-overlooked reality," Dumas said. "Now that we see it, will we close our eyes and turn our heads?"