Trump on Saturday calls out Gov. Gretchen Whitmer for 'crazy' restrictions during a White House briefing

President Donald Trump on Saturday singled out the restrictive COVID-19 policies in Michigan that prevent residents from buying goods such as flowers and paint, saying some states "have gotten carried away." 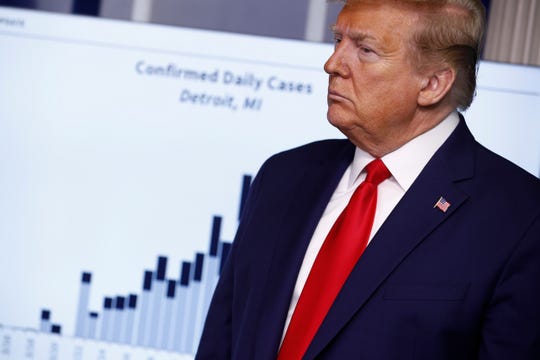 The president, during his daily White House briefing on the coronavirus pandemic, said he's been "getting along very nicely" with Gov. Gretchen Whitmer but added she's "got all these crazy (restrictions)."

"I really believe somebody sitting in their boat in a lake should be OK. They shouldn't arrest people," he said in reference to Michigan's stay-at-home order which prohibits jet skis, motorboats or other comparable watercraft but allows for canoes, sailboats and kayaks.

Michigan Department of Natural Resources conservation officers have been issuing some tickets and giving verbal warning to boaters.

"Some of them (governors) are being unreasonable," Trump added. "There are a lot of protests out there and I just think that some of the governors have gotten carried away."

The Saturday comments come after Trump targeted Michigan, Minnesota and Virginia in Friday tweets, calling for officials to "liberate" the states amid protests over governor-imposed orders aimed at stemming the spread of COVID-19.

Minutes after that, he added in another message, "LIBERATE VIRGINIA, and save your great 2nd Amendment. It is under siege!"

At the same time Trump was criticizing Michigan, Metro Detroit was being held by the White House as a model community for testing and social distancing efforts in the battle against the spread of deadly COVID-19.

Birx gave an overview of the top 25 metro areas in the country and noted Detroit Mayor Mike Duggan and the people of the city have done "an extraordinary job with their social distancing."

Detroit on Saturday reported 7,497 total confirmed COVID-19 cases and a death toll of 590. The deaths are up by 18 over Friday.

Michigan on Saturday reported an overall case total of 30,791 for the state and 2,308 total deaths. 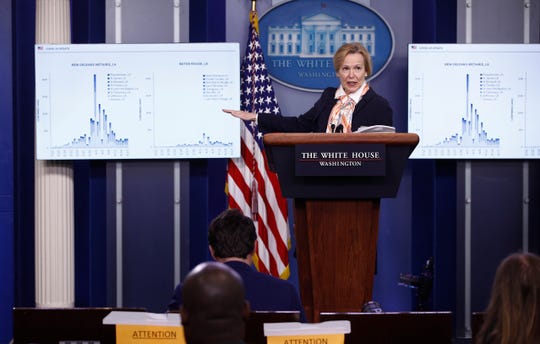 In response to Trump's remarks Saturday, Whitmer spokeswoman Tiffany Brown said "we should all be on the same team when it comes to defeating COVID-19."

During a Detroit Regional Chamber teleconference on Friday, Whitmer defended the state's stay-at-home order. It's had an impact and officials have started to see the curve of cases flatten. Her measures have also been backed by those in the medical community.

She also promised Friday to release more plans in the coming week about her strategy for reopening the state. Trump has touted plans for phased-in approaches to get the nation operating again.

On Wednesday, thousands of people gathered in Lansing to protest the Democratic governor's restrictions. Some of them carried signs and flags backing Trump, a Republican who is seeking reelection.

Asked Friday whether Trump's tweet would encourage more protests here, Whitmer said she hoped it wouldn't. She also noted that people are feeling anxious about the pandemic and its economic fallout.

“The most important thing that anyone with a platform can do is to try to use that platform to tell people, 'We’re going to get through this,'" Whitmer said Friday.

Whitmer's most recent stay-at-home order banned what she called unnecessary travel between residences and forced large retail stores to cordon off their garden and paint centers. Whitmer's order is in effect through April 30.

The governor also declined to adopt expanded federal guidance on which workers are "critical" and allowed to leave their homes amid the public health crisis.

Michigan House Speaker Lee Chatfield, R-Levering, on Saturday called for Whitmer to ease restrictions that were tightened on April 9 when the governor extended her stay-at-home orders through April 30.

In a Saturday letter to Whitmer, the House speaker said Michigan a "national outlier" for the severity of its restrictions.

Michigan has the fourth most confirmed cases of all U.S. states and the third most deaths, according to tracking from the Johns Hopkins University and Medicine Coronavirus Resource Center.

Birx's chart, besides Detroit, factors in the entire county of Wayne as well as Oakland County. She thanked Duggan for his work on testing and ensuring individuals receive adequate care.

"They've done quite a good job with testing in Michigan," she said.

Trump last week named Detroit and New Orleans as cities nationally that he believed were gaining ground in the battle against the virus.

On Friday, he reiterated during a briefing that "Michigan has had a hard time, but "it's starting to do well."

"Everyone is dropping and they're dropping rather quickly," the president said.