The death toll in Michigan stemming from the novel coronavirus topped 2,800 on Wednesday, as the state reported 113 more deaths due to COVID-19

The death toll in Michigan stemming from the novel coronavirus reached 2,813 on Wednesday as the state reported 113 more deaths due to the illness COVID-19.

The new case figure was the highest daily increase in Michigan since April 16 and 32 more than the new cases reported Tuesday, when the state reached 32,967 cases and 2,700 deaths.

As Michigan's rate of infection has slowed in recent weeks, the state has dropped in rank to seventh in the nation for its number of COVID-19 cases as Illinois surpassed Michigan in its COVID caseload.

"We've dropped down behind other states, and this because our aggressive actions and measures are working," Gov. Gretchen Whitmer said Wednesday from Lansing.

"States without stay-home orders have seen an increase in cases recently."

The state has also seen a 15% reduction in hospitalizations of people with suspected or confirmed COVID-19 from an unspecified high point 10 days ago, Whitmer said. 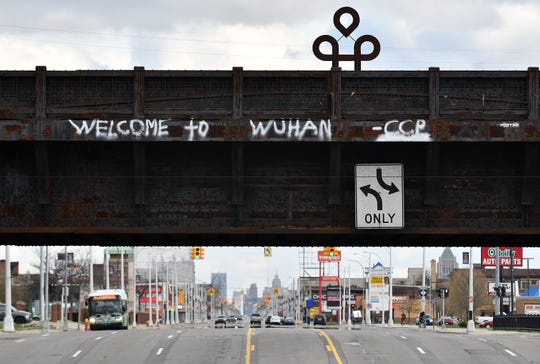 "Welcome to Wuhan" is seen spray painted on a train bridge over Woodward Avenue in Highland Park on April 13, 2020. (Photo: Robin Buckson, The Detroit News)

Michigan hospitals that felt the heaviest burden and surge of COVID patients have experienced a leveling off and are discharging more COVID patients than they are admitting, said Dr. Joneigh Khaldun, the state's chief medical executive. Fewer are in intensive care.

"As I've said before, different parts of the state may see cases of COVID-19 rise at different times, so we are not yet out of the woods," Khaldun said Wednesday.

"We're closely monitoring the entire state, making sure we're ready for any surge in cases and preparing to especially support our hospitals — particularly the ones in rural areas."

Michigan's hardest hit area has been been the southeastern region of the state, with 75.5%of cases and 82.5% of deaths reported in Macomb, Oakland and Wayne counties, including Detroit, according to state data through Wednesday.

Whitmer said she sees ​​reasons for "cautious optimism" but is planning for a short-term extension of her statewide stay-at-home order.

"We need to keep it up. I'm hoping to say more on when we can start loosening restrictions as soon as Friday of this week," Whitmer said.

Both Whitmer and Detroit Mayor Mike Duggan are urged more testing to get a more comprehensive picture of the spread of the virus.

"Testing is the only way that we will know where the virus is so that we can appropriately deploy our resources to slow the spread," Whitmer said Wednesday.

The state has expanded testing sites and testing criteria to make them available to a broader group, including "essential" workers who are reporting to work in person.

"If you have symptoms and believe you came in contact with someone who tested positive, find your nearest testing site and get tested," Whitmer said, adding that people don't need a prescription to be tested.

Khaldun said Michigan needs to get to at least 15,000 tests a day in the state to get a good understanding of who has the disease "so we can guide our public health response."

The governor said this week that the state can do as many as 11,300 tests a day but is testing half that number or less because of a shortage of test swabs and reagent — the component that indicates whether the virus that causes COVID-19 is present in a test sample.

"Swabs and reagents. It's really that simple, and it's these tools that go into the test that we're all competing for that we're all trying to get," Whitmer told The Washington Post in a live interview Tuesday.

She said states and other entities are competing for the test supplies which are in demand globally.

"We could maybe do two or even three times more testing than we are right now. But the fact of the matter is we need those swabs, and we need reagents so that we can process those tests."

Duggan has said the city is averaging about 36 deaths per day over the last few days, and the city's "flat level" of cases indicates that Whitmer's statewide extension of her stay-home extension was "clearly the right decision."

Duggan reported that 124 deaths have been reported at city nursing homes but expects the final tally will be higher, with as many as a quarter of the city's COVID victims being  nursing home residents and staff.

The mayor said Tuesday there were 124 deaths recorded among residents and staff in city nursing homes, but added it's likely the final number will be "dramatically" higher.

About 85% of Michigan's overall deaths have been people age 60 years and older with an median age of 75.