The state has chosen a new firm for a coronavirus contact tracing program nearly three weeks after cancelling a contract with a Democratic firm.

Gov. Gretchen Whitmer's administration has chosen new firms for the state's coronavirus contact tracing program nearly three weeks after canceling a controversial contract with a Democratic firm for the project.

The Michigan Department of Health and Human Services announced Saturday that Rock Connections LLC and Deloitte would manage volunteers and data for the project, which involves tracing contacts a coronavirus-positive person might have had and contacting those individuals to ensure they take proper precautions because of their exposure.

“Our team has been working around the clock to stand up this new operation and look forward to significantly expanding the current contact tracing system in place," Chief Medical Executive Dr. Joneigh Khaldun said in a statement. 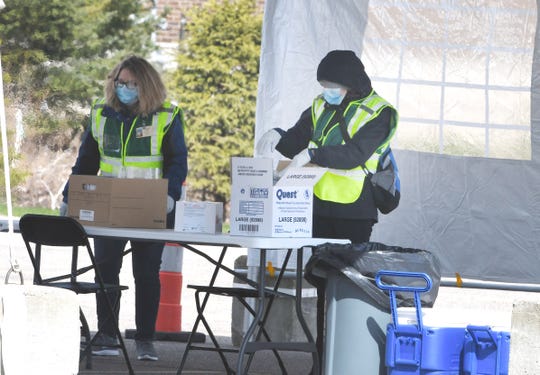 The state signed the contract with Rock Connections Sunday. The Detroit News was not able to confirm the contract or obtain a copy until Saturday despite daily requests for the information to the Department of Health and Human Services.

"Rock Connections has experience in the COVID-19 response, including operating a call center with 40 full-time employees at the former Michigan State Fairgrounds in Detroit," the department said in a statement Saturday.

Rock Connections is a sister company of Quicken Loans, founded by Dan Gilbert.

Deloitte will manage technology integration, including automated text messages that contacts can opt into after an initial phone call with a volunteer. Their work will fall within a current technology contract with the state.

The state's initial $200,000 canceled contract was for two months, while the Rock Connections $1 million contract is for six months, which accounts in part for the increase in cost between the two contracts, said DHHS spokeswoman Lynn Sutfin.

Unlike the initial conract, the new contact tracing contract went through a bidding process and the state received six proposals before choosing Rock Connections and Deloitte, Sutfin said.

People who are contacted by volunteers for the tracing project are not required to answer questions or provide information, Sutfin said, but "they are encouraged to do so to assist in the fight against this pandemic."

Contact tracing is used daily by health agencies to help stop the spread of COVID-19 and other communicable diseases, Sutfin said. All volunteers must pass background checks and will receive training in confidentiality.

"Volunteers are provided names, phones numbers and county of residence of close contacts of confirmed cases and will ask individuals whether they are experiencing any symptoms," Sutfin said. "They will not have access to test results, addresses, health insurance or financial information."

Whitmer canceled subcontracts with Democratic consultant Mike Kolehouse and data management firm EverAction VAN on April 21, a day after it was announced and after reporters began questioning Kolehouse's and EveryAction VAN's Democratic ties.

The initial $194,000 contract approved awarded community engagement and data management duties to EveryAction VAN, an arm of a Democratic campaign data management platform, and Great Lakes Community Engagement, which is run by Kolehouse, a Democratic consultant who said in March on Facebook that he hoped President Donald Trump would get “coronavirus ASAP.”

Whitmer said the contract was awarded through Department of Health and Human Services without final approval from the State Emergency Operations Center. It was canceled and will be awarded to a new firm.

Four days after the cancellation of the contract, DHHS Director Robert Gordon released the names of four staffers involved in the approval of the initial contract and expressed "complete confidence" in them.

"In retrospect, it would have been better to choose a different firm, but we have been working around the clock to save lives," Gordon said.