Morris "Mo" Hood III died from coronavirus Monday at the age of 54. He was a former Michigan state representative and senator from Detroit

When things were tense in the Michigan Senate, Morris "Mo" Hood III was known for standing at the microphone and sharing encouraging words.

On Tuesday, his colleagues stood at the same microphone and honored the legacy of the longtime Democratic Detroit, who was a former Senate minority floor leader,.

Hood, 54, a former member of both the Michigan House and Senate, died Monday from the coronavirus. Hood, who underwent a kidney transplant in 2016, had been suffering from the virus, and a few weeks ago was placed on a ventilator.

He is survived by his wife, said Bill Nowling, a spokesman for Wayne County, where Hood worked in state government relations after leaving the Senate because of term limits.

His colleagues remembered him as a fighter for his district and a friend who worked across the aisle to build relationships.

Former Sen. Vincent Gregory, D-Southfield, served eight years with Hood in the Senate. Gregory recalled Hood pushing for funding for an ice rink in Melvindale and organizing events to inform constituents about how to access coverage for Medicaid, the government health care program for low-income individuals, after lawmakers expanded the program in 2013.

"He was always involved in the community, always trying to do as much as could for all of the residents of the community," Gregory said. 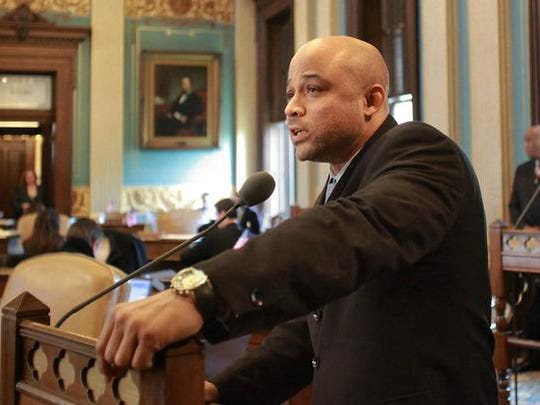 In 2005, Hood sponsored a resolution to rename a portion of Interstate 96 in Wayne County the Rosa Parks Memorial Highway. A decade letter, Hood introduced a resolution urging the U.S. Treasury Department to put Rosa Parks on the $10 bill.

He remained a staunch defender of workers and Detroit on legislative issues ranging from the Detroit school district, state aid during the city's bankruptcy and auto insurance reform.

In 2016, Hood said he had a hard time deciding between a kidney transplant and attendance at the end-of-year lame-duck session, when the GOP-leg Legislature made changes to the state’s teacher pension system. When a donor came along, he opted for surgery.

“Believe me, the decision was not an easy one to make,” Hood said. “Our teachers’ pensions — that they have worked hard for and deserve — are in jeopardy, and we must continue to do everything we can to help protect them."

"There was not a more loyal friend, thoughtful adviser or quicker wit," Whitmer said in a Tuesday statement. "Mo was the type of guy that lit up the room and made you glad to be there. He is doing that in his next life now and those of us left here are better having known him. May he rest in peace. My love and prayers go to his beloved family and many friends who grieve this tough loss.”

Lt. Gov. Garlin Gilchrist, a fellow Detroiter, added he was heartbroken by the loss.

"He was a fighter: for our city and for his life. It is devastating that so many incredible lives are stripped from us by this virus," he said. "I take solace in knowing that his spirit will live on in Detroit through his good work."

Detroit Mayor Mike Duggan said Hood's death represents the loss of another champion for the city.

"In his life and his years of public service, 'Mo' carried on his father's tradition of public service and fighting for justice and equality," Duggan said. "His passing is a great loss to the community and another reminder of how important it is for all of us to protect ourselves and each other from the spread of this virus."

Detroit City Council held a moment of silence Tuesday for Hood as well as local clergy members lost to COVID-19. Detroit City Councilman Gabe Leland said he was shocked by the passing of Hood, “someone that we all knew and respected.”

“It’s a telling tale of this disease and this pandemic and how this has hit our community so very hard,” Leland said.

"He was the very definition of a public servant, one who dedicated his life to improving the lives of others and bettering his community," Evans said.

Irma Clark-Coleman's first interaction with Hood was when she bested him in a 1998 race for a state House seat long held by Hood's father. Years later, the two formed a bond as close as a mother and son, she said.

"He and I were opponents. That's how we met, but he ran a clean race and so did I. We learned to respect each other," said Clark-Coleman, a Wayne County commissioner and a former state senator. "He was just so sweet and he was so compassionate."

"I just can't believe he's gone. It's like I've lost a part of my family," said Clark-Coleman, D-Detroit.

Clark-Coleman said she referred to Hood as "young Morris," and took him under her wing. She eventually urged Hood to run for her seat in the state House when she decided to make a bid for Senate. He won, and the two of them spent time serving in the Legislature together.

"We really bonded; we became really close. He started calling me mom and I started calling him son," said Clark-Coleman, noting when she was forced out due to term limits, she again encouraged Hood to run to take over the seat. He again obliged and prevailed.

State Rep. Cynthia Johnson, D-Detroit, and other former and current lawmakers expressed their support for Hood's family in Facebook posts.

"To the family, I am so deeply sorry," Johnson wrote. "I kept calling Morris asking him to call me. Rest in peace. Rest in power. I love you."

During an April 24 speech on the Senate floor, Sen. Curtis Hertel, D-East Lansing, said Hood was in the hospital and had been on a ventilator for a week.

Senate Minority Leader Jim Ananich, D-Flint, who served in the Senate with Hood during Hood’s final term in the chamber, said he found out about his passing Tuesday morning. Hood served as floor leader under Ananich, and Ananich called him a “personal friend.”

“It hit me like a ton of bricks this morning,” Ananich said.

A knack for perspective

Ananich remembered Hood as someone who didn’t carry grudges. He recalled Hood often sharing calming words after heated fights in the Legislature.

“We would have a really drawn-out fight,” Ananich said of the Legislature. “He’d get up and remind us, ‘This is work. This is not personal. Hug your loved ones.’

“It was always at the right time.”

On April 14, 2015, Hood gave one of those speeches, honoring another lawmaker who had died.

"We just have to remember what life is really all about," Hood said. "It’s about helping others and doing what God wants us to do. We say our prayer here every day. We pray to God here every day for His guidance, for His help, for His direction and to do His will.

"Not all of us, but some of us have experienced death that has been close to us. It’s not an easy thing to deal with. So as we lay our heads down tonight and say our prayers, please pray for those we’ve lost. Please pray for their families, and pray for each other. That’s all we have — each other."

Clark-Coleman said she prayed Hood wouldn't be lost to the virus after learning he'd been battling it.

She said Hood had his share of heartache in life, losing his first wife at a young age about a decade ago. He later remarried. But Hood never left the side of his first wife until the end, Clark-Coleman added.

"I think that's why I was so devoted to him," she said. "He was the most loyal friend you could ever have."