“Everybody wants the economy to reopen but they also don’t want to see a lot of people die," Dr. Joshua Sharfstein said

Lansing — Doctors who have advised Gov. Gretchen Whitmer on combating COVID-19 say reopening Michigan's economy should be a "slow process" with as many as four weeks between major moves to ease restrictions.

The latest loosened restriction took effect Monday, when hundreds of thousands of Michigan manufacturing laborers began returning to work. Manufacturing represents 19% of the state’s economy. Less than 5% of the state’s business activity had been considered essential before Monday.

"You have to wait at least two weeks to see what actually happens," said Dr. Marisa Eisenberg, an epidemiology professor at the University of Michigan. "Because otherwise, you're like a person in the shower and you keep turning the hot water up and up and up. ... Suddenly, that water is way too hot." 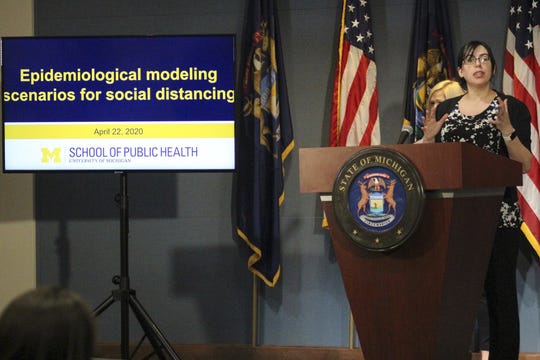 Dr. Marisa Eisenberg, an epidemiology professor at the University of Michigan, speaks at a press conference with Gov. Gretchen Whitmer on April 22, 2020. (Photo: Michigan governor's office)

Some of the experts said the state should wait two weeks before lifting new restrictions. But they all seemed to agree there has to be a time lag for state officials to determine whether a move to ease the stay-at-home order leads to more cases of the virus that's already been linked to 4,584 deaths here.

Some business leaders and Republican legislative leaders have argued for opening more businesses around the state or in certain regions with appropriate public health safeguards as the state has experienced more than 1.3 million people filing for unemployment.

The Democratic governor has rejected the GOP leaders' approach and said she has the sole authority to make public health decisions during the pandemic emergency, a position House Speaker Lee Chatfield and Senate Majority Leader Mike Shirkey are contesting in state court as unconstitutional and "invalid."

During a Thursday press conference, Whitmer unveiled a six-phase plan for reopening the economy and provided details about how she's made decisions aimed at fighting the novel coronavirus in a state that ranks among the top 10 nationally for cases and deaths.

She listed seven doctors outside state government with whom she's consulted. The Detroit News attempted to contact each of the public health experts after the press conference and interviewed five of them about where they believe the virus stands in Michigan and what's ahead.

The experts — three based in Michigan and two outside of it — said the state is seeing a flattening of new cases and can begin lifting restrictions but must approach the decisions with caution to prevent a second wave of disease. 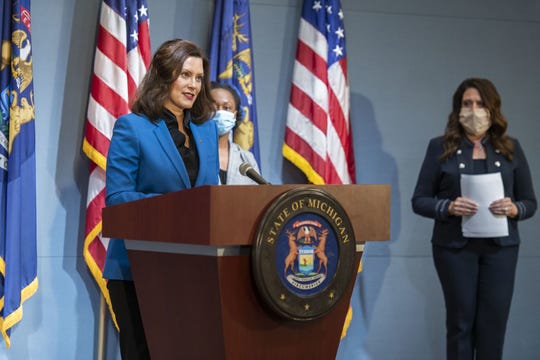 “Everybody wants the economy to reopen, but they also don’t want to see a lot of people die," said Dr. Joshua Sharfstein, a physician and the vice dean for public health practice and community engagement at the Johns Hopkins Bloomberg School of Public Health.

It can take a while for the action to lead to results, and then it takes a while for infections to generate, he said. Sharfstein used the example of reopening parks. If it's raining during the first days after reopening parks, the impact would be delayed, he said.

“I think you have to wait a little longer than two weeks," said Sharfstein, specifically noting he would recommend three to four weeks.

During a Monday press conference, Whitmer herself referenced a 14-day period for determining the results of a loosened restriction. The cadence of a "couple of weeks" is about right, she said.

"The thing that you can't plot on a calendar is human behavior. That's why it's so important that everyone continues to do their part. That's how we continue to turn this dial and take the next step into the next phase."

During the past couple of weeks, the governor has begun to lift restrictions on real estate activities, construction and manufacturing. Whitmer generally shuttered the state's economy when she issued her first stay-at-home order on March 23.

The state is in the third stage, which is labeled "flattening," of the six-phase reopening plan. To get to the "improving" stage, the state needs to see sharp declines in new cases, robust containment protocols and strengthened hospital capacity. In the fourth phase, more businesses can reopen and small gatherings are allowed.

Dr. Ashish Jha, director of the Harvard Global Health Institute, said someone from Whitmer's team first reached out to him in early March. He has since had other conversations with the governor and her team, he said.

"The states that are basically doing it all at once, I think that is really reckless. I think it's very, very dangerous. A week feels a little fast to me," he said.

"I think the governor has taken a lot of pressure from people who are not thinking about this very smartly. And I think she’s really held strong and done what’s good for the people of Michigan.”

Health officials want the economy reopened, Jha said. The problem is if you reopen it too soon, "you’re going to find yourself back in the same position where we were in early March. We don’t want a repeat performance," he said.

"We’re almost at the finish line of where we need before we can start opening up safely."

Jha and other experts also urged caution when it comes to reopening the state of Michigan by region. While the Upper Peninsula has a small fraction of the cases Metro Detroit has, the way many Michigan residents travel around the state complicates the possibility of relying on regions.

Reopening a portion of Michigan would create an "automatic pull" of people from other areas of the state, Jha argued. 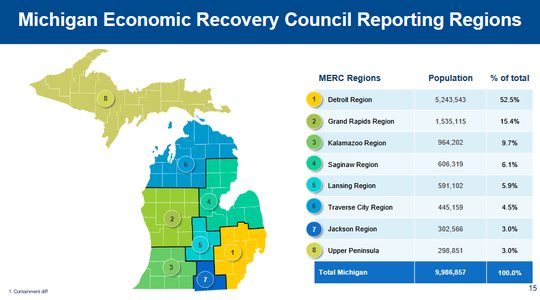 However, as the state reopens, there may be a need for a regional component to the approach, UM epidemiologist Eisenberg said.

"You may need to do certain things in one area and not in others," she said.

Statewide, Michigan is seeing new cases of COVID-19 flattening out, but at a regional level, the situation varies, she said. Some parts of West Michigan have experienced increases in cases recently, she added.

"We are in a flattening stage right now, which is really encouraging and shows how social distancing has really helped to kind of tamp down the spread," Eisenberg said.

Eisenberg, who spoke at an April 22 press conference with Whitmer, said she understands the frustration people feel about the economic shutdown.

"It is tough. And it is going to be a slow process. And that just kind of is what it is," she said.

But the doctors said they are seeing reasons for optimism in Michigan's data. Dr. Vikas Parekh at the University of Michigan's Michigan Medicine said officials want to see the positive trends sustained. 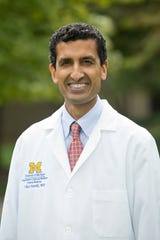 Whitmer's team is seeking a lot of advice and input from different perspectives, Parekh said. There is debate and dissent among people providing their advice, he said.

Officials want to see trends of hospitalizations and new cases go down as testing across the state increases, said Dr. Emily Martin, an epidemiology professor at the University of Michigan. They're also watching the percentage of COVID-19 tests coming back positive.

As of Saturday, the state had experienced nine straight days with less than 10% of the tests performed returning positive results, according to the newest Department of Health and Human Services data.

If cases are creeping upward with strict social distancing restrictions in place, "there is going to be some fuel that goes into the fire when you lift" them, she said.

Martin, like other public health experts, said the pandemic had pushed them into new roles. She noted that she had been interviewed by Rolling Stone.

"I have to say that epidemiologists don’t get called that often," Martin joked. "They have certainly never put us on the news before.

"Epidemiologists have not been rock stars before."