An Eaton County woman is facing charges after U.S. Customs and Border Protection officials allege she drove a stolen vehicle carrying drugs and an estimated $130,000 worth of gold.

The driver tried to re-enter the country Thursday after making a wrong turn and ending up on the Blue Water Bridge in Port Huron, Customs and Border Patrol said in a statement.

"While conducting a primary inspection on the driver, a system query alerted to the vehicle being driven as stolen," the release said.

Officers took her into custody without incident and searched the vehicle, where they found gold bars weighing over 5 pounds and 30 grams of marijuana, investigators said. 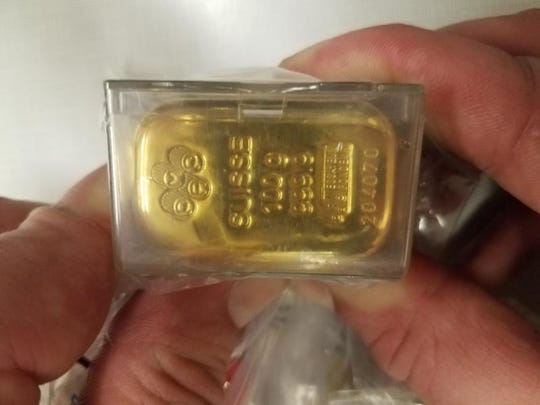 The gold bars have been turned over to Michigan State Police. (Photo: U.S. Customs and Border Protection)

“In this case, CBP officers took the extra steps to identify an individual in possession of a stolen vehicle and a large amount of gold,” said port director Michael Fox. “This is another prime example of our excellent working relationship with our partners.”

The driver and vehicle, gold and marijuana were turned over to Michigan State Police, which is investigating the case.