Lansing — Michigan Attorney General Dana Nessel’s office on Saturday pushed back on assertions by the dam company that state permit denials and litigation played a role in the failure of the Edenville Dam.

Wixom Lake’s levels were set by court order — an order with which the Department of Environment, Great Lakes and Energy was complying when it declined permits to lower lake levels in 2018 and 2019 and granted a permit in April to raise the lake, Nessel's office said in a statement. 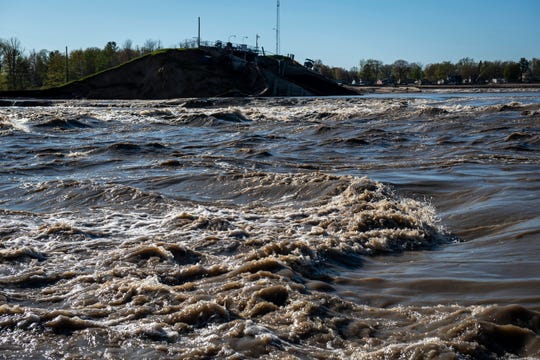 Water rushes past the remainder of the Edenville Dam at Wixom Lake in Beaverton, Mich. on Wednesday, May 20, 2020. (Photo: Nic Antaya, Special to The Detroit News)

The statement comes days after the 96-year-old Edenville Dam on the border of Midland and Gladwin counties failed amid heavy rainfall and caused catastrophic flooding in communities along the Tittabawassee River.

The Federal Energy Regulatory Commission, which regulates hydroelectric dams, revoked the license of the Edenville Dam in September 2018 after more than 20 years of trying to get the owner to increase its capacity in the event of a major storm. FERC requires that a dam that poses a great risk to people and property must have the capacity to handle or divert 100% of the water from the maximum possible flood.

When FERC revoked its license, it turned regulation of the dam to the state, which requires only that the dam be able to handle half of the maximum storm possible.

State emails indicate the state knew as early as Jan. 31 that the dam failed even to meet state safety standards.

Even with that knowledge, the state granted dam owner Boyce Hydro’s permit request to raise Wixom Lake levels April 9, action the department has argued was required under the court-ordered lake levels and permitting laws.

Boyce Hydro manager Lee Mueller has said the company lowered levels nearly eight feet in the winters of 2018 and 2019 — even after permit applications were denied — because it otherwise could not complete the proper maintenance needed in the winter months to protect both workers and people downstream.

Federal regulators had allowed the decrease, at least temporarily, in 2018 to allow for maintenance on the Secord Dam upstream, but there was no such federal allowance in 2019.

The Attorney General Office's statement on Saturday said the environmental department’s May 1 lawsuit was meant to address “past illegal lowering” in the winters of 2018 and 2019 that resulted in the deaths of freshwater mussels and to avoid future dramatic consequences.

“It does not seek to force the dam owner to do anything other than pay for the damage it caused, comply with the Midland and Gladwin County Circuit Court orders, and not violate state law in the future by completely draining Wixom Lake without a permit,” the statement said.

Contrary to the statement, however, nowhere does the lawsuit discuss or request an order against a "complete draining" of Wixom Lake.

It asks for an order "forbidding any future unauthorized drawdown of Wixom Lake."

Mueller also has argued the state’s lawsuit, resident complaints and the denial of permits to lower levels in 2018 and 2019 pressured him to seek a permit in April to raise Wixom Lake levels, roughly five weeks before the Edenville Dam broke.

But for that increase, Mueller said, it’s likely the dam would have held in Tuesday’s storm.

The state has called that assertion “categorically false.”

“It is possible to protect public safety and natural resources at the same time,” the Attorney General's Office statement said. “EGLE and DNR’s lawsuit had nothing to do with the tragic event that took place and never sought to compromise public safety.”

Nessel on Saturday in an interview with The Detroit News also pushed back on suggestions from the Michigan Republican Party that she should recuse her office from an investigation into the dam's failure.

“With these troubling new revelations that the state's lawsuits may have played a role in this tragedy, it is clear that Attorney General Dana Nessel should not lead this investigation,” Michigan Republican Party Chairwoman Laura Cox said in a statement Friday.

EGLE is conducting the investigation, not the Department of Attorney General, Nessel said. The agency indicated Friday it might bring in third parties to help in the future but did not name Nessel's office as one of them.

“We would review (their reports) later on to see if there would be any civil or criminal liability, but we’re not involved in the investigation,” Nessel said.